Last time I wrote about vanilla creatures, it was prompted by question #48 's mentioning of "virtual vanillas" on the Great Designer Search 2 multiple choice test. Intrigued by the definition, I was attempting to figure out the magical ratio of virtual vanillas and French vanillas to every other kind of creature when designing a Magic: The Gathering set. That blog post is now outdated by this very post, but in case you still want to read it, here's a link to the original post.

What I didn't cover before were how many vanillas there should be in a set, virtual French vanillas, and the distribution of these different types of vanillas among commons and uncommons. Funnily enough, I'm doing all this analyzing and Mark Rosewater tweets me around the time after I posted the first vanillas blog post saying it isn't an exact science. Even if it's false irony, it was amusing to me nonetheless. 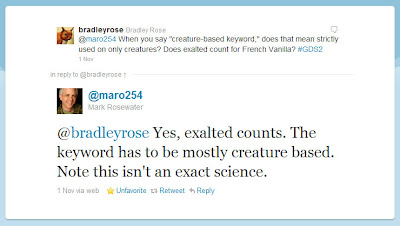 So, dear reader, if you're a fan of designing Magic sets and haven't yet solved the conundrum (sphinx) of how many vanilla/virtual vanilla/French vanilla/virtual French vanilla creatures to include in your set, then you're in the right place. Whether you're designing a large set, a small set, or a Core Set, read below for some numbers to help you out. Though, I should disclaim: I'm not a member of Magic R&D, and a lot of the data gathering was done manually by going through and viewing a lot of commons and uncommons. So, that means 1) I could have missed something vital that R&D keeps in mind, throwing the numbers off and 2) I could have made human error in my data gathering and some numbers are off in some places. At least you'll (like I said last time) be in the general ballpark. (Though, hitting a home run so well that it exits the ballpark runs contradictory to the phrase "in the ballpark" as being a good thing; but I digress.)

Before we begin, I want to make clear why it's so important to care about all these vanillas. The answer is board complexity. The more complex state the game is in, the more difficult it is to make decisions as a player. Since creatures are a large part of Magic, they make a larger impact on the complexity of the game when there's more rules text. There's a limit to how much an average Magic player can account for in his or her mind. It's important to have the right amount of complexity in a set's creatures, so the player doesn't get overwhelmed, heavily mentally taxed, and/or take too long making decisions. There may be a certain level of complexity for instants/sorceries/enchantments/artifacts/lands, but that's another topic.

Just recently, Aaron Forsythe mentioned board complexity in his introduction as a judge in the second episode of The Great Designer Search 2. Amidst his words, he mentioned word counts per creature (vanilla creatures help reduce that) and that Lorwyn (the set) was "incredibly board-complicated." It's no coincidence that Lorwyn's percentage of vanilla-ish creatures are among the lowest in all the sets currently in Extended (This is all the sets I data-gathered on my spreadsheet). And Morningtide (The small set in the Lorwyn block)? It has the lowest percentage of vanillas in Extended. It doesn't even have any vanilla creatures of any kind at uncommon.

So here we go.

First, let's determine what makes a vanilla, virtual vanilla, French vanilla, and virtual French vanilla what they are. There are a couple of key factors that I went by for determining the differences among the vanilla types.


And then there are rare exceptions like changeling which don't actually do anything in a vacuum. Though, you could argue that it does count since the environment that creatures with changeling existed in meant that changeling made a difference. But I didn't count changeling as something that mattered when I did the spreadsheet. Do I regret it? I'm not sure. Anyway, here's the differences among the different types of vanillas:
Next, here's a list of effects you could add to a vanilla or French vanilla creature to make it a virtual vanilla or virtual French vanilla creature, respectively:
New Ice Cream Eaters Should Have Vanilla with Chocolate Chips

Now that we've got what defines our vanilla-type creatures, there's the creature cards to look at to see how many of these vanilla creatures we need to include in a set. Since design standards change over time, I want to get as close to modern design patterns in terms of vanilla creatures as I can. I looked at creatures in all of Extended, which means Tenth Edition and onward, just to set a good cut-off for "modern." I didn't look at every Magic set in existence since what was done in Alpha may not apply nowadays when designing a Magic set. That'd be more of a historical study on how vanilla creature ratios change in sets over the course of the game's lifetime, which is still an interesting topic (I'm nodding in your direction for that suggestion, MTG Color Pie).

Also, when counting the average number of creatures in each type of vanilla, I kept in mind the change in set size that Wizards decided on starting with Shards of Alara. So, while I counted sets further back than Shards of Alara to determine percentages, I didn't let those sets skew the "number of vanilla creatures" counts that an average set would need.

So, after taking the data into account, here's the "boring" part of this post. Though, the difference between a large set and a small set are seemingly non-existent. The data shown below is just variance from actual results. The average large set and average small set's total vanilla creatures percentage of total creatures differed by just about one percent (39.45 vs. 40.49. Core Sets had an average of 61.4). Anyway, here's the numbers:

Large Set
Small Set
Core Set
Of course, these ranges take the extremes of highs and lows that have been done within the selection of sets I worked with. The Magic set you're designing could call for an even more extreme number than what's presented here, so when I say your cards should fall within a certain range, it means "highly suggested under normal circumstances." Also, the Core Set analysis looks silly when there's only Magic 2010 and Magic 2011 to work with.

And that's that. Is this really all there is to say about this topic? There's a bunch of numbers in that spreadsheet, there's definitions for how to identify vanillas, virtual vanillas, French vanillas, and virtual French vanillas, and there's the resulting analysis. Well, "analysis." I really do hope that this was helping in some way to you.

Oh! I thought of something. There's no study of vanillas in each of the five colors. But, if that were my goal, I might've jumped off a bridge by now. Just divvy up your vanillas as evenly as you can, and what's remaining, you could keep in mind for when you're squeezed for a spell-like effect or something, and you could make use of an ETB trigger virtual vanilla slot.

P.S. In case you don't know, I've started up a Great Designer Search 2 page that accounts for my design work related to GDS2. The first finalist challenge that was assigned to each of the eight finalists was also completed by me in a mock design challenge submission. I'll be "playing from home" along with the rest of the finalists for several reasons and posting them to the Wiki as well as most likely discussing related things on this blog.