Having a Good Knight

Over on Goblin Artisans, this weekend's art challenge is on knights. Five pieces of art were provided for use, though, other knight-related creative commons art can be used.


Hello to you all! This week we re-examine knights!
White Knight and Black Knight have been re-imagined many times over in mtg. Nowadays we do not have protections to mirror those knights!
Choose one of the illustrations and re-imagine what a knight does when it is tied to a specific color.

The very first Knights in Magic have the abilities of first strike and protection. With protection not being an ability that is only supported rarely lately, this begs the question: what makes a Knight a Knight in Magic? 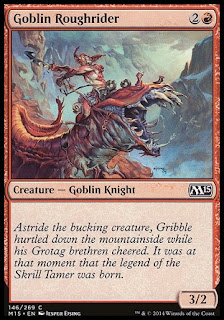 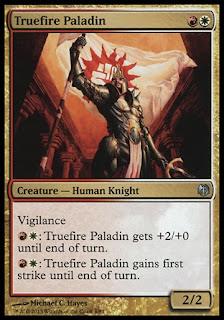 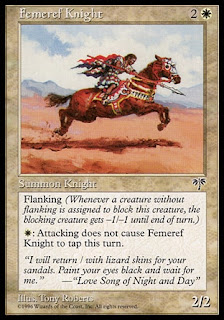 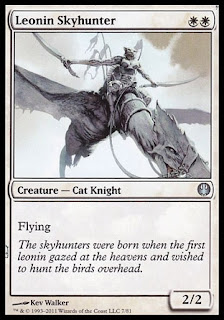 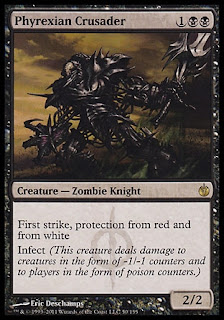 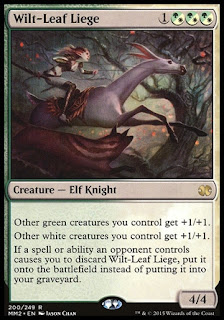 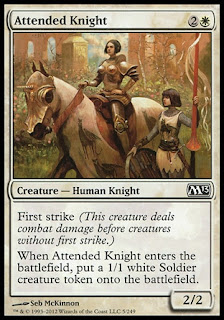 With the above established, I sought to design a Knight but which color do I choose? I chose to go with the color that hasn't been as fleshed out with Knight execution: green. Green has a whopping 1 creature that is monocolored, Gladehart Cavalary. 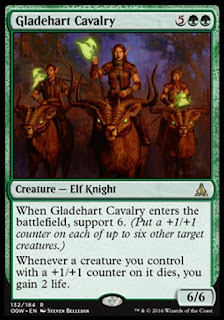 Moreover, this card was just released today to the public, in Oath of the Gatewatch! Welcome to the Knight Club, mono-green. Notice that this Knight is expressing its Knight traits by having a large body and by supporting its troops.

Besides, green's knight art for this Weekend Art Challenge has a moose and that's adorable. Check out the art I'm working with:

If you've followed my Daily Card Redesign series in the past, you'll know that I often like to match my card designs with what's going on in the art, so I'm going to let that influence me in addition to coming up with a design that also fits what I envision a green knight should currently be or do design/gameplay-wise. A confluence of both those things.

Now, expressing all of a Knight's aspects as pointed out above would be nearly impossible, I'd imagine. It's all right to just focus on one or two. This happens with any sort of concept, like the idea of Goblins.

Goblins are portrayed in Magic as being dumb, like with the flavor texts of Goblin Piker and Skirk Fire Marshal. Goblins are expendable, as seen in Goblin Sledder and Goblin Grenade. They also like to tease or play pranks, shown in the cards Jeering Instigator and Goblin Battle Jester. Lastly, they tinker (read: poke, prod, and eventually blow up) with artifacts, like with Goblin Welder and "Goblin Archaeologist."

I'm not sure there's ever been a Goblin depicted as dumb, expendable, pranking, and tinkering all at once. But that sounds like a fun challenge for another time. Anyway, back to Knights - we only need to show Knight-ness in at least one way for this green Knight.

The most important thing to do for this assignment, though, is to create a Knight that might be lumped in with category of Knights that White Knight and Black Knight are - what Knights used to be. Blood Knight was a later addition to this "grouping" of classic Knights. Re-imagine and design like that for nowadays. So, we'll examine what aspects of Knights above that would remind us of the classic Knight design of White Knight and Black Knight. 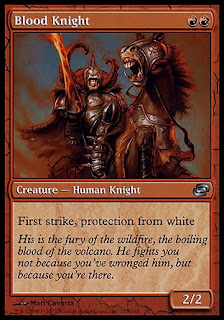 White Knight and Black Knight exemplified qualities of "swearing to destroy evil" (protection) as well as its ability to be adept in combat via first strike. This "destroy evil" thing intrigues me, so we'll go with that.

I did some brainstorming off-screen here, and it's a messy (but awesome) process sometimes, and I landed with caring about abilities that represent the enemy colors but are shared with green as well. The same applies for every other color in this cycle. I'm only mocking up green, but here's the text form of what each color would care about:

So, for each color, the Knight would have those abilities (not bad, for each creature) and then would not able to be blocked by any creatures that have either of those abilities. We're not doing protection anymore, and I wanted to find a simple perhaps-combat-oriented way to show the hate so that it could still prevail against this "evil." I chose "can't be blocked" as the way the Knight prevails and the "evil" to be represented by the abilities its enemies also share.

You might say it's ironic that this creature can't block an opponent's copy of this Knight. Perhaps, as a show of respect to each other's devotion, they don't hurt each other. And what about fellow green creatures that have hexproof and deathtouch - perhaps this Knight's mastery means it knows how to evade such creatures that shares its traits.

Lastly, coming back to the art, you might be wondering why a moose-riding, unassuming Knight can do hexproof and deathtouch. If you look more closely at the art, there's magical, glowing green vines surrounding the Knight. These vines can restrain and choke creatures to death as well as wrap around the Knight and protect him or her from spells. =) 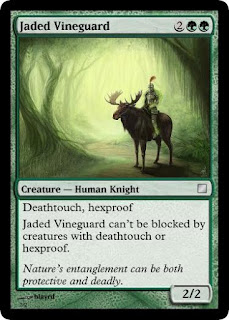 I decided to have "card name during development" fun and did a double pun for its title. "Jaded", like with the color green; and "Vineguard", as in "vanguard", because he or she is a Knight. But has vines surrounding him or her.

Anyway, so, a black Knight in this cycle would have deathtouch and lifelink and it would also say "CARDNAME can't be blocked by creatures with deathtouch or lifelink."

I also made this a Human instead of Elf (seems dressed like a Human, anyway) since Humans can be any of the five colors, and that'd be fitting to mirror the creature types for the cycle as "Human Knight."

Concerns I have: I know, it costs 4 mana and that sucks, but I think I had to cost it that high based on how much it should cost to get hexproof, let alone deathtouch, onto the table. Also, I wonder if this Knight would end up being un-fun to play with if you just left this forever on your side as a good threatening blocker (like you do with your Deathtouch Snakes and Rats). Then again, protecting you IS Knight-like. In the end, it should feel fun, but I haven't playtested this card.

Also, not sure if I got the order of abilities of "deathtouch" and "hexproof" correct along with the rest of the templating. I THINK so, but not sure.