Inkwell Looter
Hilarious. The blog contains many other cartoons parodying/satirizing Magic and tokens with cool art that you could even download and print for yourself. So, check it out.
Anyway, so I've been studying the last Great Designer search's judge's comments on the contestant's submissions. I've decided to write down all the design rules/guidelines/whatever I didn't already know in a Notepad file for myself. I've finished the first "episode", so I just have a few rules so far, and I'm going to share those, in case you didn't know them either:


That last one is there to make sure I don't forget. I knew that players didn't like to be milled by the opponent, but it makes sense that they wouldn't like their own cards to mill their own selves, either. Especially the players that are really hoping for that one "bomb" to help them win the game that they only have a single copy of. They wouldn't want to see that card put into the graveyard.
However, I need to be taking into consideration that I'm learning design rules that were modern four years ago. Some things might have changed since then. Like my last blog post talking about the design rule regarding colored mana symbols in the mana cost. It doesn't seem to be true now, and it was true then.
So, I'll just take it all with a grain of salt. I know that, for the most part, there is still valuable stuff to learn in this old material. If I had enough time, I'd catch up on all the great design articles there are out there to read. But, I don't have an unlimited amount of time. So, the time that's ticking away, working against me. It's like the pre-test to the actual test; testing how smart I can be about preparing myself as much as I possibly can for this.
And here's one untapped resource: You, reader. Perhaps you know of some material that I should read. You can let me know. It'd be funny if you were one of Magic R&D's members reading this. Because you'd have all this wisdom that you could impart upon me, but you couldn't. Or, at least, I don't THINK you can. *hints and winks*
Cheers,
Bradley
at 11:47 PM 6 comments:

No journal comic today. So far, I just have a sketch for panel one. There's a number of reasons that I could mention for why no comic got created, but I'm not going to go over them. That'd be a waste of time. I mean, it was 8:30 P.M. when I started this blog post, and I don't think rushing this second comic and making it sloppy would be nice. No way. But, anyway, yeah, let's move on to talking about Magic. *snap snap*

Today, I took the multiple-choice test that was given during the initial wave of testing of The Great Designer Search four years ago. Mark Rosewater went over the answers to the test in his column, so I read that as well. I got 26 out of 35 correct. Missed four too many to pass on to the next round (the participants needed at least 30 correct), but, at least, I'm more prepared now for the actual thing. To be fair, many of the questions happen to be ones that a lot of other people missed, too. And I believe one of the questions may be outdated according to 2010 Magic design principles.

One question of note was that, in 2006, as a design rule, artifacts should not have colored mana symbols in their mana cost. Since then, there was the whole Shards of Alara block where artifacts had colored mana symbols in their mana cost. However, this made me wonder whether they've updated their design rules since then or, just for Shards of Alara block, they were able to make an exception. (And Reaper King exists, too, but he was able to be cast for 10 of anything, like a regular artifact, though.)

And if there's another reason that exists nowadays, I don't think it should. I feel that artifacts should able to be aligned with colors of mana. Relics imbued with magic, you know? And it's just unnecessarily restricting on design space, too.

I just now tweeted Mark Rosewater regarding this rule. I'll let you know what he says, if he does respond. EDIT: A shout-out to @mtgcolorpie for discussing this rule with me on Twitter when he saw my tweet.

That's all I have for today, and if you are also gearing up for this Game Designer Search 2, here's a links to the page containing links to pages related to the last Great Designer Search:

Day -30: Getting Ready to Kick Some Patootie

I'm not a writer, I'm not a professional artist, and I certainly do not do comics. So, I ask of you, please forgive the above whatever-that-was comic. And for the ones in the future. In particular, every single one of them. Thanks!
So, I've been telling myself to do a blog for a LONG time. If I had up an interesting blog that was related to the games industry (not limited to video games, too) and updated it regularly, I'd get some followers. And with that, there's more of a chance that somebody would notice the blog and go, "Hey. Now THAT guy would be a neat-o guy to get my coffee every morning." O.K., not like that, but, you get me, right? Doing stuff like this would help me get noticed and increase my chances of achieving my dream job (or at least getting closer to it): doing game design.
Today, in his column, Mark Rosewater announced The Great Designer Search 2. Like the comic details, it's a Magic design competition to try to win a design internship at Wizards of the Coast. ...Wow. If I win this, I'd be pretty much on my way to getting what I dream of doing for a living, and in short order. Well, that's if I win.
I imagine there will be thousands of people trying to enter this competition, so it'll be tough to stand above the rest of them when Wizards is picking participants. However, I've entered a Magic design contest before (designing a Magic card), where Wizards has judged, and won. The image below is my winning card: 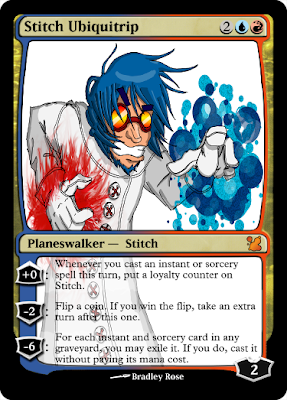 So, I at least got some potential!
And thank goodness I finally got something rolling. I'll be making this blog look nicer, too, when I get to it. When the contest is going, I'll update at least once a week, for each round that happens (for as far as I get), showing a candid view of how I approached tackling that round's design challenge.
But, until September 29th, I'll be updating this sporadically.
Next time: a chicken.
Cheers,
Bradley
at 6:25 PM 2 comments: