Last week, I created a design skeleton and filled in each card slot's card types along with some sense of creature sizes and where undying will appear at common. I also mentioned that white usually gets a Pacifism-like Aura along with another beneficial Aura at common. However, I didn't update the skeleton appropriately. So, I made sure now to include that Aura.

But I need to clear up a slot for that Aura. With 4 instants and 2 sorceries, I'm hard-pressed to eliminate either one of them to make room. If I get rid of a sorcery, then I feel white having just 1 sorcery in a large set is too few. If I get rid of an instant, then white would no longer have "lots of instants" when comparing 3 instants to 2 sorceries.

Since I got rid of a creature card slot in green and turned it into a creature-token-making card, and with white having 13 creature card slots currently, I could eliminate one of those slots and still have white retain its dominant position as the color with the most creatures. I eliminated a small creature slot figuring that the token-making card in white would have to at least be a small creature.

Now that that is that; this week, I'm filling in the remaining initial details for the skeleton. I'll also talk briefly of PAX South and how that relates to this set I'm working on.

Now that I have added "undying" to card slots, I'll finish off the keywords and place them on creatures. But before I do that, I need to see how many vanilla creatures I need to have at common, and then reserve those slots, so I know they're off-limits for adding keywords to.

Thankfully, Past Me wrote about vanillas and how frequently all of the different flavors (hehe) of vanilla show up in sets: "Neapolitan Needs Vanilla, Two"

Each Core Set usually has 10 creatures at common that are vanilla. Perfect, I'll give two to each color.

O.K., now for the creature keyword mechanics. I'll start with blue, the color with fewest keywords, to get warmed up.

Blue gets the following creature keywords: flying, hexproof, islandwalk, flash. Here are the average numbers of each:
Let's settle on this:
As a general rule, common creature cards cannot have two creature keywords on one card. However, flying is so simple and easily understood that it is an exception to this rule (and sometimes reach or defender qualifies as an exception, too). So, let's first put the non-flying keywords onto creatures before adding flying.

Now for flying - most Core Sets had 3 common blue flying creatures. I'll stick with that for now, but this can change later. Hexproof has been scaled back since it was first introduced in Magic 2012. Hexproof has generally disappeared from common, and that's a good thing, since hexproof can get dangerously unfun. Better leave hexproof for uncommon, if anything. And then sampling 1 of each of islandwalk and flash sounds good for now.

There's usually at least one creature in blue common that is a pure French vanilla flier. So, I'll lock in one of those. Flash is usually found on a flying creature in blue, so I'll make one of the fliers have flash. Since I have just two medium blue creatures and one of them is already set to be a vanilla creature, I'll give myself more wiggle room by not locking down my final medium flier with flash and instead give it to a small flier.


I'm not going to have regeneration appear on any card in this set for two reasons: 1) Regeneration is a sucky, clunky mechanic that should eventually be fixed in Magic; 2) undying has a similar effect and would be put onto creatures or other cards that would normally have regeneration.

So let's do this:


I didn't want forestwalk creatures because I wanted more killing to happen, so that there are more chances for undying to trigger. Since I was pushing for 2 undying creatures, I got rid of any chance at dabbling into vigilance.

The larger your creature is for undying, the more costly and/or rare it should be. As such, I am not putting undying in the large creature slot. So that leaves a small and a medium creature for undying.

With one large slot that isn't vanilla, I could only choose one keyword to assign to it. Deathtouch doesn't do anything for large creatures. Among trample, reach, and hexproof, trample seemed like the best support for creatures swinging into the red zone and causing creatures to die. Trample it is.

With both large creatures locked down, that leaves 4 medium creatures. 1 is vanilla, and the other is an undying creature. I don't want to miss the opportunity for green to be able to block fliers with a size-able body, so 1 of those medium creatures will have reach. Keep in mind, though, that I could combine reach with undying, due to reach's simplicity. But it's best for now to err on keeping it more simple (and less powerful).

With hexproof being annoying and deathtouch being most effect at small, I put both keywords on small creatures. My second reach creature must also be small. And my second undying creature is also at small.

In an "Aha!" moment, the following happened: 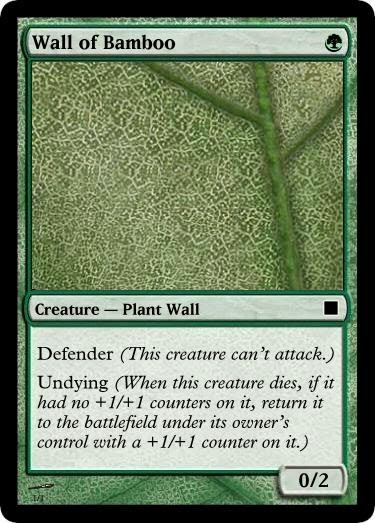 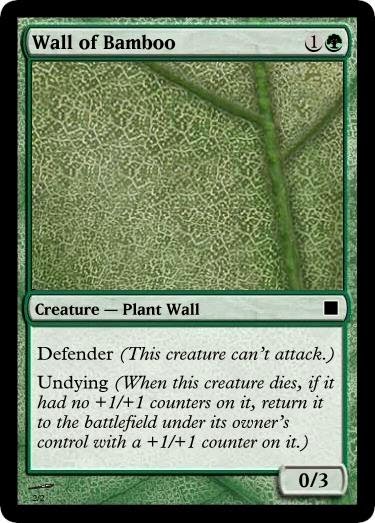 So, here's what the skeleton looks like for green common at the moment:

Red has the following keywords: haste, first strike, trample, intimidate, mountainwalk. Red also has the firebreathing ability at common often. And red RARELY has flying on its creatures. Note that double strike doesn't usually show up at common. I won't write it off for adding it during development, but I won't start off this skeleton with double strike written in.

Numbers on red creatures with the above abilities:
Here are my chosen numbers:


I chose to make sure to have red have a firebreathing creature due to creatures with undying getting larger in this set, so that red, having no undying, had a way to combat them.

Like with forestwalk for green, I wanted to minimize evasion, which is intimidate (and mountainwalk) in red. So, 1 instead of 2 intimidate creatures was chosen, and I put intimidate on a small creature. 0 creatures for flying as well.

First strike and firebreathing aren't normally found on medium creatures at common. So they go in the small slots.

White has: flying, first strike, vigilance, flash, protection, lifelink; and in the following quantities:
Numbers I chose:
Since white is getting undying for the first time, I want to maximize the number of white creatures that have undying. So I give 2 to it.

Vigilance feels better on a medium creature rather than a small creature.

Lifelink should definitely go on a small creature. It can get out of hand quickly with larger creatures.

First strike should be on a small creature.

There's only one common flier that has undying. And it's a 2/2 with a drawback. White is good at fliers. And blue doesn't have undying in this set. So, it's time for a different common flier with undying: 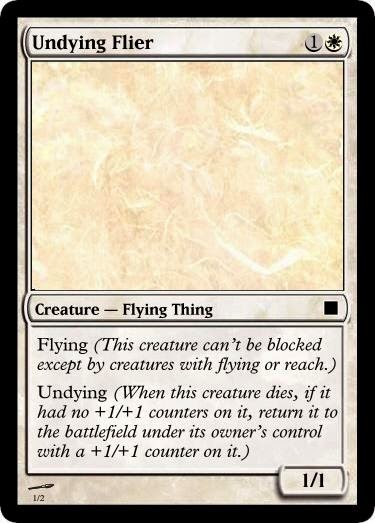 Numbers:
What I chose:

I'd rather minimize intimidate. Undying replaces regeneration for this set.

While I'm no longer going to PAX South this weekend, I do suspect that during the time of PAX South or on the Monday afterward, there are going to be revealed pieces of information related to the summer Core Set.

Because of this, we may or may not get to see the returning keyword among the spoiled pieces of information. If we do see that the returning keyword is "undying," then we have a game of how close can we design tot the real thing? Othewrise, we'll not pretend we're doing some sort of competition in making a Core Set.