Returning to the mana fixing solution.

Last time, the set had 10 artifacts and 10 lands devoted to fixing.

This has evolved a bit since then.

Before, there was talk of fortifications. And pairing the artifacts with the lands to form four-color fixing goodness. Which is great. One of the flavors was a key artifact that would pair with a Gate land.

Now, I've got a better idea. And this solution involves Magic Man Sam's suggestion of flags for when I asked about objects that are placed into locations (flags are planted at specific places). 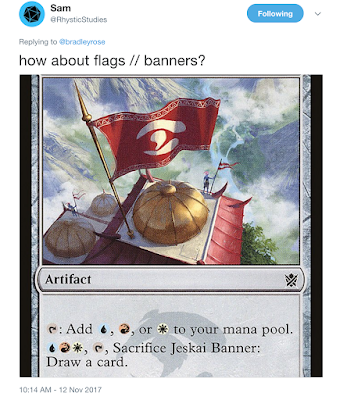 Which is just as good as keys going into locked gates. Gates are stationary and get locked up and need keys. Flagpoles need flags.

However, something that flags do that keys don't do as well: get held by people in a meaningful way. Sure, people can just carry a key on them. But flags ...well, Magic even has the creature type Flagbearer.

And that's when the "Aha!" moment struck sometime while I was taking a shower.

A 10-card two-color cycle of creatures that are of creature type Flagbearer. They're able to hold the flag and help fix your mana. BUT ALSO, you can instead use the flag artifact with a land. The flags are flexible enough to be able to be planted on a land or be held by a Flagbearer. This allows for greater consistency for mana fixing card pairings to be available but without pushing things TOO far (where all three of these 10-card cycles could comingle with any other card among these thirty cards).

To top this off, the lands would be of type Tower, an existing land type (see "Urza's Tower"). Towers make so much sense to plant a flag at. Easier to grok why only the artifact fixers can enhance your mana fixing to the next level by only being able to pair with one of the creatures or one of the lands.

(I'm a big fan of re-using existing design technology to expand upon the space of such re-used tech. By this, I mean the creature type Flagbearer and the land type Tower.)

The flag itself should be an artifact that can be picked up by either a Flagbearer or a Tower. Which means either going the route of "pairing" like with soulbond. OR... making the flag an Equipment AND a Fortification. It'd look something like this:
Black-Red Flag
1
Artifact - Equipment Fortification
Equip 2
Fortify 2
MANA-FIXING EFFECT

Green-White Flagbearer
GW
As long as CARDNAME is equipped, EFFECT
2/2

The exact wording I'm still working on. But you get the gist of how this will fit into the bigger picture. As in, the common design skeleton.

Speaking of, here's the current skeleton numbers for each section of it:
'kay, that's it for now.
at 11:03 PM No comments:

This one took a while to release, but I had figured out the main draw (foreshadowing) of the nonwhite faction mechanic for some amount of time shy of a while. It's drawing cards.

White sucks the most at doing the spells that have the effect of "draw a card" or "draw cards."

For the other colors:


For both flavor and mechanics, there's a couple aspects of white vs. nonwhite to approach for drawing cards, both of which could be acted upon:

So, the mechanical execution may be something like:
And then this next one has nothing to do with drawing cards and involves purposefully making sure that all cards that cost white mana has all of its numbers and number words amongst its power, toughness, and text never contain both an even number and an odd number.
And this next one is a riff of the above but made more simple of an effect but involve ensuring that white creatures always have its power and toughness be two odd numbers or two even numbers:
No example designs this time. Just the raw possible design execution directions that could be taken, to be mulled over.