Note: This is speculation on an upcoming Magic: The Gathering set.

Just in case you don't know, Fire/Ice is an example of a split card. 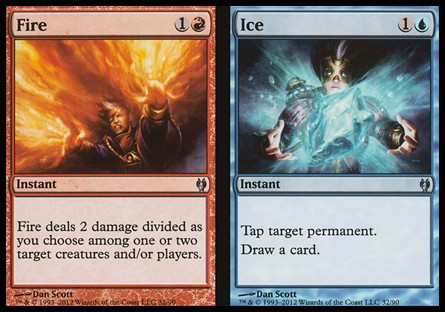 I've also got some other stuff to talk about regarding Dragon's Maze. We'll get to that in a second. First, split cards!

So, why would split cards appear in Dragon's Maze? Three reasons: nostalgia, timing, and necessity.

Return to Ravnica block is all about returning to the things we loved about the first Ravnica block. We loved the guilds the first time, so they're back in the way we knew them before despite anything the original block's story might have otherwise said. We also had fun with guildmages, Guild Leaders, Guild Champions, shocklands, and hybrid - so they're back in Return to Ravnica block, too. Another aspect of Ravnica we loved? The split cards in Dissension. They were exciting and memorable - and so are the ones in Dragon's Maze.

Split cards are one of those kinds of cards that only appear periodically over the years of Magic: The Gathering. Whenever split cards make an appearance, it has to be the right time. The environment must be accommodating. Also, doing something new each time you return something like split cards, like with any mechanic you bring back, is pretty much a must. There have been monocolored, two-color, and three-color split cards. Never has there been a four-color split card. Like this: 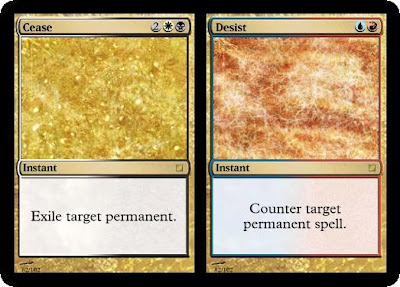 Aside: I thought Desist's countering permanent spells felt appropriate for costing blue and red because they are the two colors that care about instants and sorceries - the two card types that aren't permanents.

Forgetting about context for a moment, why would there be a four-color split card? It really doesn't make sense to exclude one color. It also doesn't make sense to put colors into pairs. ...Unless split cards appeared in a block where two-color pairings mattered! Aha! And because it's Dragon's Maze, where the block structure and the cards within it make building four-color decks feasible, this is the PERFECT time to do four-color split cards. If it doesn't happen in Dragon's Maze, it's going to be a LONG time before we get to have another opportunity to do something like Cease // Desist.

You notice how I mentioned "three-color player" and didn't include the "two-color player?" I'll bring this up again in a bit.

From the announcement of Dragon's Maze, we know that the set size will be 156 cards. This is 11 more cards than the standard 145 number for small sets (Now, if you're going to double-check me on this, Magic: The Gathering's two most recent blocks of sets have been kinda wacky. Innistrad block as a whole had different numbers for set sizes so that it, seemingly, could have its total number of cards add up to 666. And Mirrodin Besieged had 150 cards since it needed to have an even split between Mirran cards and Phyrexian cards).

The 11 extra cards had puzzled me until the announcement of the format of the Dragon's Maze prerelease. Within that announcement was some extra information about the Dragon's Maze booster packs: no basic lands but nonbasic ones instead. The Guildgates return and actually get the Dragon's Maze symbol while the returning shocklands retain their respective expansion symbols of Return to Ravnica and Gatecrash. Ten of the extra card slots in the set will be for the Guildgates while the special mythic rare land will fill in the extra eleventh card slot.

One possibility for why the Guildgates get their own expansion symbol when they're just going to be appearing in that special slot alongside the shocklands is that there will be different art that shows what happened to them AFTER the "gatecrashing." The other scenario is changing up the hidden message found within the flavor text among the Guildgate cards. The reason for the new expansion symbol could be for either of the above cases or for both.

The Dragon's Maze prerelease announcement also revealed something else interesting that helps to support my case for four-color cards: two guilds in one prerelease pack.

Now, before you get up from your seat (for some reason) and point out that the Dragon's Maze prerelease announcement states that the prerelease packs will actually just give you two guilds that share a color to make for a THREE-color deck instead of a FOUR-color deck: I know.

I was expecting that, to play with Dragon's Maze effectively, you'll need to build a deck with a minimum of three colors - not four.

I said the following in my last article:

"...your color strategy for the Dragon’s Maze drafting format is: three-color minimum with the option to go four colors."

So that's where they cleverly used the prerelease packs from the previous prereleases to influence you toward a combination of two guilds, forcing you to go three colors, giving you access to a larger pool of the cards contained within Dragon's Maze.

On split cards: how many will there be in Dragon's Maze? Fifteen. Why? Because that's how many possible four-color combinations there are among the two-color pairings. Where are we going to fit them? Five at each rarity. Five cards, ten sides. Each guild will have a common, uncommon, and rare split card! ...Right, I did say common. I'm going out on a limb for this one, since split cards are usually uncommon, and guessing that five of the split cards will appear at common. After all, Dead//Gone did appear at common! So, ONE common split card exists! 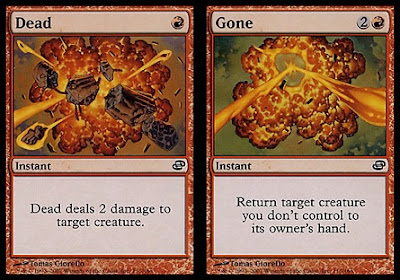 Why will it be even more O.K. for five common split cards? First, there being fifteen combinations makes it a perfect fit for three rarities, with a cycle of five cards at each rarity. Secondly, the public has been prepared for common split cards in three ways: A) Split cards have appeared before in Magic: The Gathering, multiple times. B) Fire//Ice exists in the Izzet Vs. Golgari Duel Decks, exposing to even more of the world what the heck a split card is. C) Wizards made the holiday card for 2012 a split card. The last two points are what I consider to be clues to the inclusion of split cards in Dragon's Maze. 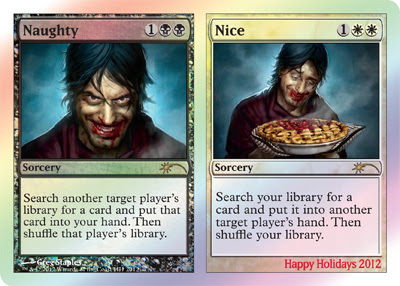 Besides those nifty nonbasic lands appearing in the basic land slot in booster packs, Dragon's Maze will have 10 mythic rares, 35 rares, 40 uncommons, and 60 commons. Since all ten guilds will appear in this set, we're going to have HUGE cycles of cards - ten-card cycles! But this is a good thing for solving the puzzle that is Dragon's Maze. Larger (and fewer) puzzle pieces!

Note that the Guild Champions, the two-color legendary creatures representing each of their respective guilds, can't be mythic rare. This is because the new planeswalker of the set, Ral Zarek, exists and will occupy the blue-red mythic rare slot. Because of this, the whole ten-card cycle must be relegated to the rare rarity.

Another reason is, flavorfully, the mythic rare Guild Leaders (like Niv-Mizzet) are much more important than the Guild Champions. A Vorthos reason for the rarity difference!

This is a no-brainer.

Note 2: The other four-color cards don't have to be anything other than split cards.

But, by principle, despite possibly looking sheepish, I'm remaining firm with my speculation on new four-color commander cards along with four-color split cards. If I'm right, well, that'll be awesome. If I'm wrong, then... consequences be damned.

I stated this above. This will allow for a rare for each guild as well as provide more support for the player going the four-color route. Wowee! All of THAT is taken care of with just five card slots. Five precious card slots out of 35.

I mention this because EVERY Magic: The Gathering set has rare artifacts. Rare lands may or may not appear, but take up these slots when they do.

Note 1: If I'm wrong about four-color legendary creatures, then we know that those five card slots can be devoted to monocolored cards and these remaining ten can be hybrid cards.

Note 2: In an unprecedented move, perhaps there would be five nonlegendary four-color cards (with the full cost) and five monocolored cards.

Note 3: Related to the nonlegendary four-color cards that aren't split cards - I think it's worth noting what Mad Olaf has brought up before and what I've written about in my old Red Site Wins series: four-color hybrid. 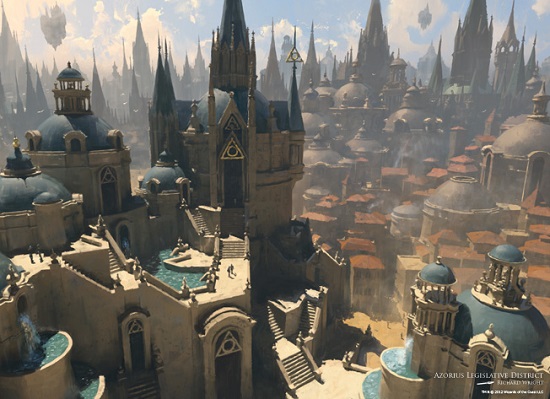 10 Lands, one for each guild

I am saying this because of these pieces of art. (Thanks to scotland_4 with his/her post on MTGSalvation.)

Unless there's a big change with split cards (which I don't anticipate for this set - four colors is already the new thing), the split cards will be instants/sorceries. This means there's a need for gold creature cards. This is why I think there's got to be at least ten slots (one for each guild) for these cards.

Like with rares, I have no idea how hybrid and monocolored cards are going to be handled in Dragon's Maze, so these will remain a mystery for now. I believe part of these should be artifacts, but  with ten lands already and my guess of the following artifacts at common, who knows? 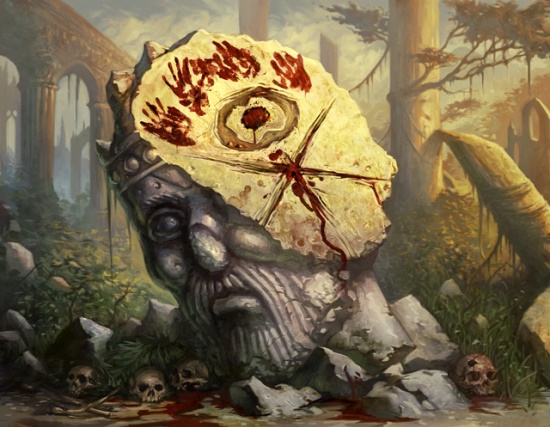 10 Signets, one for each guild

This is me reaching a little bit out there. I'm iffy on this because the ten new pieces of signets art that you can find in this album on MTGColorPie's Pinterest was made for the Magic: The Gathering Online Cube. But, it seems a little iffy that ten whole new pieces of art would be made for these commons. They ARE good, but are they that good to warrant new art just for a temporary online event?

Besides, I think everyone is going to need a little bit of help to achieve three or four mana easily in this set, and these are just the ticket.

Though, there's a possibility of the signets showing up in the set releasing later this year, Modern Masters, which was intended to be drafted. I'll stick to my guns, though, and guess signets in Dragon's Maze.

Again, Dead//Gone has existed before, but I do recognize I'm going out on a bit of a limb for common split cards.

For the same reason at uncommon, there has to be common gold creatures, and the split cards are noncreature cards.

I just don't know what else to expect for these remaining cards. The slots are so tight that there could be certain decisions made in regards to monocolored, gold, or hybrid.

Also, keep in mind that the Guildgates are already at "common" and appearing in the booster packs in the basic land slot. And the signets are ten artifacts. So, I don't see there being any more lands or artifacts in this rarity. But, hey. If there are, then it'll be five artifacts/lands and twenty cards of monocolored, gold, and/or hybrid.

Before I go, though, I do want to mention four-color hybrid cards. I've written before about this in my Red Site Wins series AND on older posts on this blog, and Mad Olaf has written about it, too - it's these types of cards: 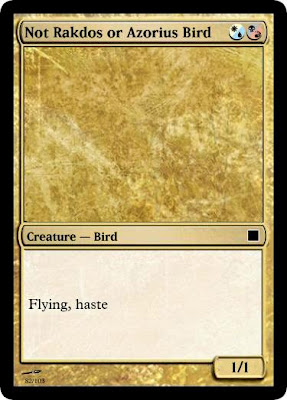 These cards, while cool, are confusing. It has the colors of the following guilds: Azorius, Rakdos, Boros, Dimir, Orzhov, and Izzet. Yet, Azorius and Rakdos cannot cast this card. It can be easy to miss this fact, I believe. Therefore, I DON'T think we'll be seeing these kinds of cards in Dragon's Maze.

To re-iterate: I do NOT support these four-color hybrids as shown above!

And this sums up my predictions on Dragon's Maze. Hooray for four-color split cards! Thanks for reading! Feel free to tweet at me at @bradleyrose or leave a comment below regarding Dragon's Maze! I'd love to hear your response!
at 3:00 PM