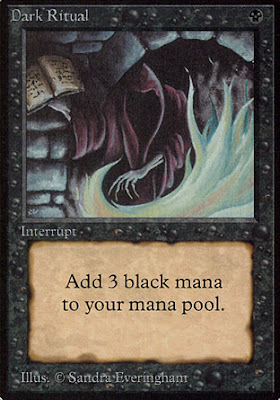 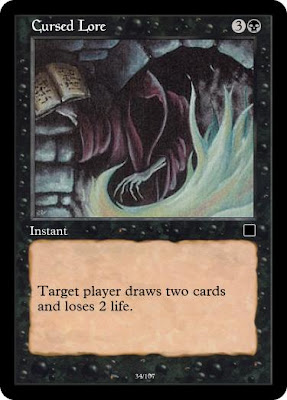 Black sometimes has card-drawing spells at a cost of life - except targeted so that you can even throw some life loss at a player. There's been Sign in Blood and Harrowing Journey already. So, how do we do something that's card-drawing in Alpha but have it NOT be one of these two cards that exist already? Well, drawing three cards is uncommon, so then drawing two cards - except at instant speed.

Having a card that draws one card and causes 1 life loss for one black mana just isn't enough to warrant it existing as a card that really does anything. Maybe in the right block where either life loss or card drawing is a bigge deal than usual. So, I didn't pursue this.

Blue had Ancestral Recall, but because of the fact that black can cause loss of life means that this card isn't strictly worse than Ancestral Recall. Cursed Lore offers up its own slice-of-its-color-pie version of card drawing.

P.S. I made no attempt to do a different version of temporary mana boosting because: 1) Black already has Sacrifice in Alpha; and 2) Dark Ritual was too powerful, so I have no interest in trying to achieve the same thing again. Well, there's also the color pie shift to red, but it was in black back then, and I can't change that Sacrifice also exists.
at 5:13 PM