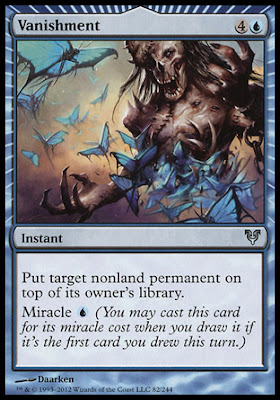 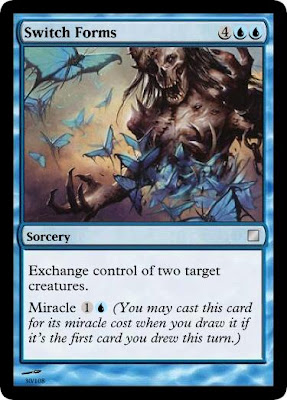 I can't just make the card return a creature card to the top of the library, because that is actually just a narrower Vanishment. That would be pretty lame for this exercise. I could look to bouncing a creature back to the owner's hand, but Into the Void already exists at uncommon. Also, Devastation Tide already returns nonland permanents to hands. It'd be uncool to have an uncommon miracle simply be a single targeted version of the same effect as the rare miracle of the same color.

So I had to do something different. I wanted to do a polymorph effect like Rapid Hybridization, but because this is late in development, I can't make tokens that would be 1/1 blue Insect creatures with flying. And while there IS a blue 1/1 Spirit creature token with flying in Avacyn Restored on another card, it wasn't quite right because Innistrad Spirits are geists/ghosts. They're not magical like Kamigawa - which would clearly be the case if the Spirit looked like a bunch of butterflies.

I could have the player replace the creature with another one, but it'd have to be from the hand because making a miracle version of Polymorph is too many lines of text for an uncommon. And the player may or may not have another creature in his or her hand to replace the one you would destroy/exile.

So, I can't do tokens or polymorph.

Metamorphose seemed like an appropriate flavor, but it's actually juts the same thing as Vanishment already was (with the bonus of being able to put any permanent - even land - on top of the library. Magic R&D has been cutting down on the number of bounce effects that can hit land in modern design), except with a drawback and cheaper.

So, I had to get creative with what the art is depicting. Perhaps the butterflies represent something abstract, like fleeting inspiration - drawing cards? Turning a creature into cards? I thought things like this until I stumbled upon the "Aha!" moment when I looked at Switcheroo.

The flavor with the art is now that it's depicting the enemy creature is turning into butterflies that you have, and your butterflies are becoming this monstrosity that is transforming into butterflies. In gameplay terms, you're just swapping the places of the cards - but, flavorwise, a switching of bodies is happening! And it feels right as a miracle card!
at 10:39 AM