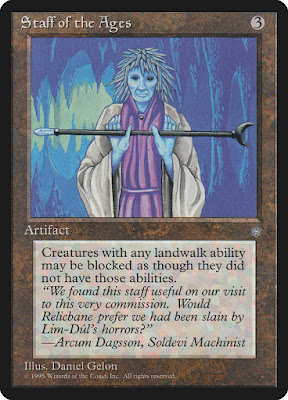 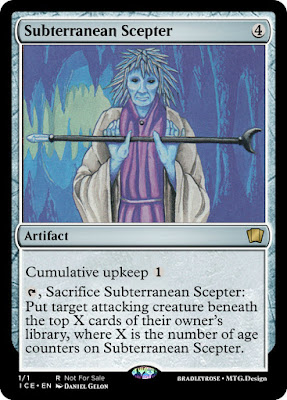 The focus is on the object being held. This feels like the caster of this card isn't really taking action but moreso of reacting, being passive. Thus, hitting attacking creatures. Also, cumulative upkeep, which was a mechanic in Ice Age, is one that promotes being passive, biding your time.

I like that the longer the opponent waits to attack, the worse consequence it will be. Thus, the opponent will keep attacking. And having the opponent just sit and wait out the scepter means you were able to stall out being damaged for a while.

Since the opponent is going to prolly keep attacking you, there's a tension in decision-making ...do you affect a creature now or wait for a better target/chance later?

Lastly, this place depicts somewhere underground. This is why the effect was chosen of putting a creature underneath cards on top of the library, since that gives the feeling of "casting a creature downward into the earth". Eventually, they'll resurface. :)

The alphabetical ordering of this set looked like this:

So, Subterranean was chosen as the word that comes before Sunstone but still refers to the setting depicted in the art (and the type of magic being cast). Scepter was chosen just to shake it up from "Staff."

For similar effects for costing purposes,  I looked to blue and saw that it costs three mana to put a creature on top of its owner's library. Since this is an artifact that costs generic, I needed to turn one of those blue mana symbols into two generic mana cost. Thus, the 4 mana casting cost. 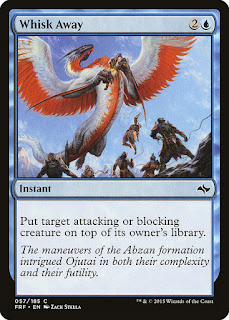 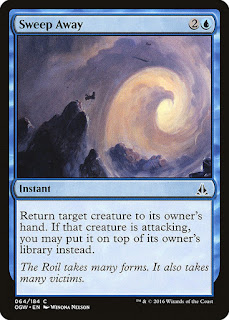 Oddly, both of these similar cards are also similarly-named. Perhaps future cards can just do "_____ Away". Though, sometimes, this means bouncing something to someone's hand instead of library, like Wipe Away.
at 10:04 PM No comments: 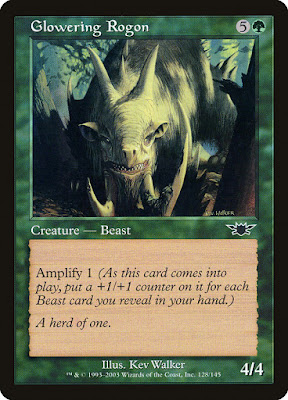 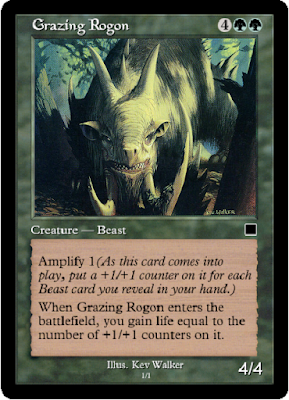 Amplify is a keyword in the Legions set. A search of what keywords are at common, especially for Beasts, reveals that there are only three creatures with amplify. Additionally, for each color/creature type that did receive an amplify card at common, there's only one instance of such a card. Because of this, we are restricted to keeping this with amplify.

My first thought was to give this creature trample. However, a search of all the amplify creatures in Legions reveals that there is already a trampling amplify creature. This card: 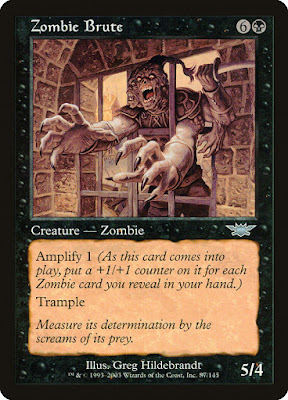 Dang. And perhaps it was for the best. Feral Throwback, another green beast, has both Amplify and Provoke, both new creature keywords. Provoke is a version of evasion (except, giving evasion to your OTHER creatures rather than the one who has the ability), and trample is already an evasion type of ability. 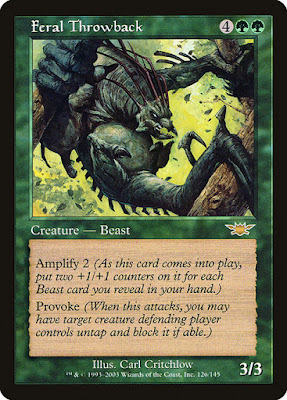 ...perhaps this is why trample was given to a different color. Trample is a great incentive for amplifying. But Beasts are both green and red. So, we can't give amplify to a red creature. And only Soldiers and Zombies have amplify. If we want Feral Throwback to still have provoke, the solution is to look to either a Soldier or a Zombie to give trample to. A black zombie with trample made the most sense (and I now have a greater appreciation for how the design turned out here in the context of the Legions set).

So, a minor enters-the-battlefield effect would be in order. Looking at other cards that had effects that improved with amplify, they usually just referenced the +1/+1 counters themselves instead of something like power or toughness. Some gave some power/toughness boosting while others dealt damage. But none gained life.

Gaining life equal to the +1/+1 counters seemed pretty harmless enough (remember, hole-filling means you need to put in a card safe for printing with minimal testing since development time has grown short by the time this scenario occurs).

However, granting an extra ability to this existing card means something has to give. Either the positive parts need to diminish or there should be extra negative. But with minimal complexity. This meant changing the power, toughness, and/or mana cost.

I felt like it was important for this Beast to be at least 4 power and 4 toughness at this mana cost, as a Beast tribe (this was a tribal block) representative. And I wasn't looking to make it even better, so mana cost was the place to tweak. Since there was already higher-cost cards at common for green, I thought it important to retain its cost where it is. So, as a balance to the added life effect, I added the extra green mana requirement in the mana cost.

Lastly, I needed to change the name that's appropriate for this card. But that it also still fits alphabetically between these two other cards:

Since you were gaining a small amount of life, and that this was a large beast that you might think would eat veggies all day (I don't know what a Rogon eats, perhaps it's a carnivore), I chose to hint at this with "Grazing". This still comes alphabetically after "Gempalm" and before "Hundroog." Since I didn't want to do the type of Beast this is a disservice, I left the "Rogon" part of the name in.
at 12:15 PM No comments: