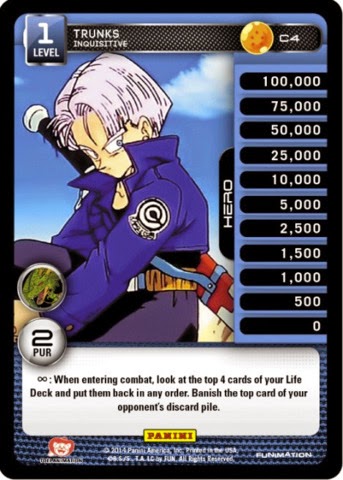 Baseball-card maker Panini rebooted the Dragon Ball Z TCG, a trading card game that I played during high school lunches a decade or so ago. This is an awesome thing made even more awesome that group of friends of mine, which includes the same high school friends, started playing this reboot. However, there's one thing that really bends creases into my metaphorical cardboard. Panini is screwing up with card rarities.

Those of you who are playing this DBZ reboot already know about the "ultra rare" card rarity. Cards of this scarcity only show up once in every 48 12-card booster packs. However, my beef is not with these crazily-rare cards. It's with Level 1 Trunks, a common card.


In the DBZ TCG, every deck needs a set of four cards that represents Levels 1, 2, 3, and 4 of a character, called a "main personality." This could be Goku, Frieza, Piccolo, etc. You only need one copy of each of these cards, but you always need one of each of, say, Level 1 Gohan, Level 2 Gohan, Level 3 Gohan, and Level 4 Gohan. You cannot insert these personality cards into your deck - they sit outside of your deck. You build a deck around this character.

So, most people are going to have their one Vegeta deck, or their one Krillin deck. This means each average DBZ TCG player only needs 1 of each of the level cards for each main personality. With that, also, most folks only have a single deck to a handful of decks. With the eight different main personalities to choose from with the first card set release of this reboot, and with a growing number of main personalities to add to the mix with the additional sets that are releasing, almost no one is going to require more than a handful of four-card sets of main pesronality cards. DBZ TCG cards are found in two different types of products: starter decks and booster packs. Each starter deck does come with a perfect set of Levels 1 through 4 of a random character. This is a good thing. But starter decks are still aggravating, and I'll get to why this is later. For now, let's talk booster packs. More specifically, the main personality cards you can find in booster packs of Set 1: Trunks and Captain Ginyu.

Most Dragon Ball Z players are not going to buy just one booster pack. In fact, unless a player purchased six starter decks and luckily-and-perfectly got the correct random card pools from those starters, that player is going to be buying booster packs.

Let's assume that you just got started playing this game. Due to the deck-building restriction of only being able to play up to three copies of any one particular card, for most cards; you will smartly purchase just three starter decks. Let's say you are playing Orange Goku. Next, you will buy booster packs. There's a deck-size restriction of 60-card decks. Let's be generous and say there's four useful cards per booster pack. Three starters gets you 30 cards, so you'll need to buy eight booster packs to cover the rest.

So, you open up your eight booster packs, and you get around 56 commons. There are 60 commons in Set 1, so it's unlikely you'll get a perfect single copy of every single card in the set. Some cards you'll have doubles of. ...And would you know it, you have two copies of Level 1 Trunks. Cool, so you're 25% of the way through to getting a set of Trunks, so you can build a Trunks deck, but you have two of these Level 1 Trunks. Well, you could trade it to others, but since it's common, you're going to pretty much not be able to trade with anyone else who plays this game who needs it. Your buddy bought a booster box hoping to get an ultra rare and has THREE Level 1 Trunks as a result. Well, shucks. Who's going to build three Trunks decks? 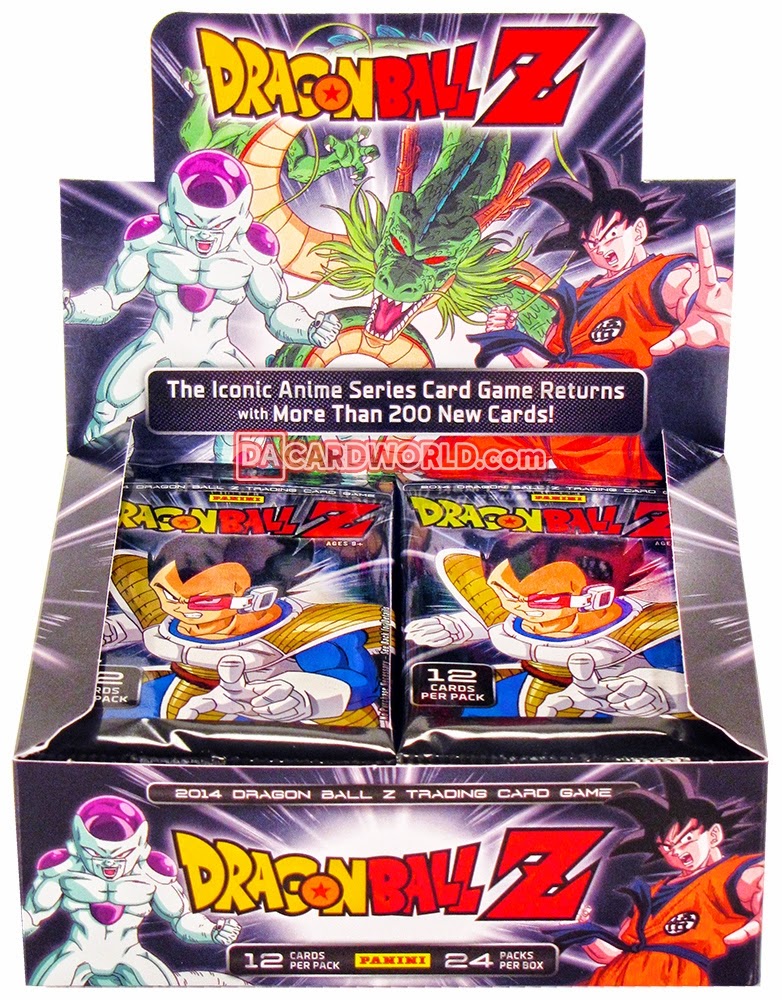 This is indicative that most players are going to have a bunch of Level 1 Trunks (and Level 2 Trunks, Level 1 Captain Ginyu, and Level 2 Captain Ginyu; for that matter). Furthermore, the Level 3 and Level 4 versions of these main personalities are uncommon, and a good chunk of players are going to have more than one copy of each of these cards. What's even more crazy is that even if you find a home for every extra set of Trunks and Captain Ginyu play sets for players to play with, because Level 1 and 2 cards are common and Level 3 and 4 cards are uncommon, you're going to have literally unusable Level 1 and Level 2 main personality cards. That is just a waste of printed cardboard.

For a real example of this, I personally have purchased multiple boxes of booster packs. Out of three boxes, I got 8 Level 1 Trunks cards and 5 Level 4 Trunks cards. Even if I built five Trunks decks, those three Level 1 Trunks cards are never going to see the light of day. Realistically, I'm only keeping 1 of each of these Trunks cards, so I'm wasting about 20 pieces of printed cardboard. Useless, useless paper product.


I get the advantage of wanting a common main personality card, as a publisher of this card game. If someone opens one booster pack, making that Level 1 Trunks a common increases the chance that this person will want to seek out the rest of the set to build off of. But this wasteful strategy would at least be mitigated if these Level 1 personalities could be used as Ally cards in decks. That way your Goku deck could use a Level 1 Trunks in it. This is how it was in the original version of the DBZ TCG game, and it was a neat option that solved this problem. However, in this reboot, there are now strictly Ally cards, of which main personality cards can never be, and vice versa. 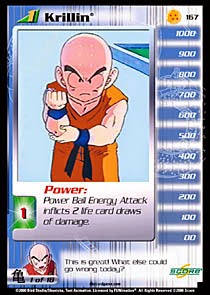 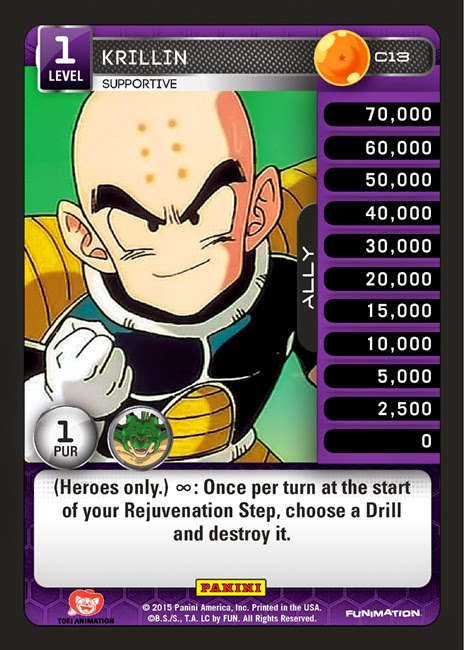 Which leads me to the next issue - cards that are limited to 1 copy of per deck. Ally cards, as a rule, can only have 1 copy of each within your deck, for each your decks. This is slightly better than the Level 1 Trunks problem, where you could use each of your copies of Chaozu in your Orange Goku deck and your, say, Red Gohan deck. Even more slightly better are the common Dragon Ball cards, which are also limited to one copy per deck, but at least each of those don't have a "Heroes Only" or "Villains Only" restriction like Allies do. But with all of this said, I still have way too many of each of these cards.

Lastly, there are some cards that arbitrarily are limited to just one or two copies of within a deck. Thankfully, besides the Ally, Main Personality, and Dragon Ball cards, there are no "limit 1" or "limit 2" cards. Those are at uncommon or higher.

Push It to the Limit


So what is a Panini to do? How do we fix this?

Now, one suggestion could be to increase the maximum number of copies of a card to four, so that there would be less uselessness with having so many copies of the same non-Main Personality/Ally/Dragon Ball card. But then this change might throw off the printed "Limit 1" or "Limit 2" cards that already exist. What a poopy corner we're backed into. 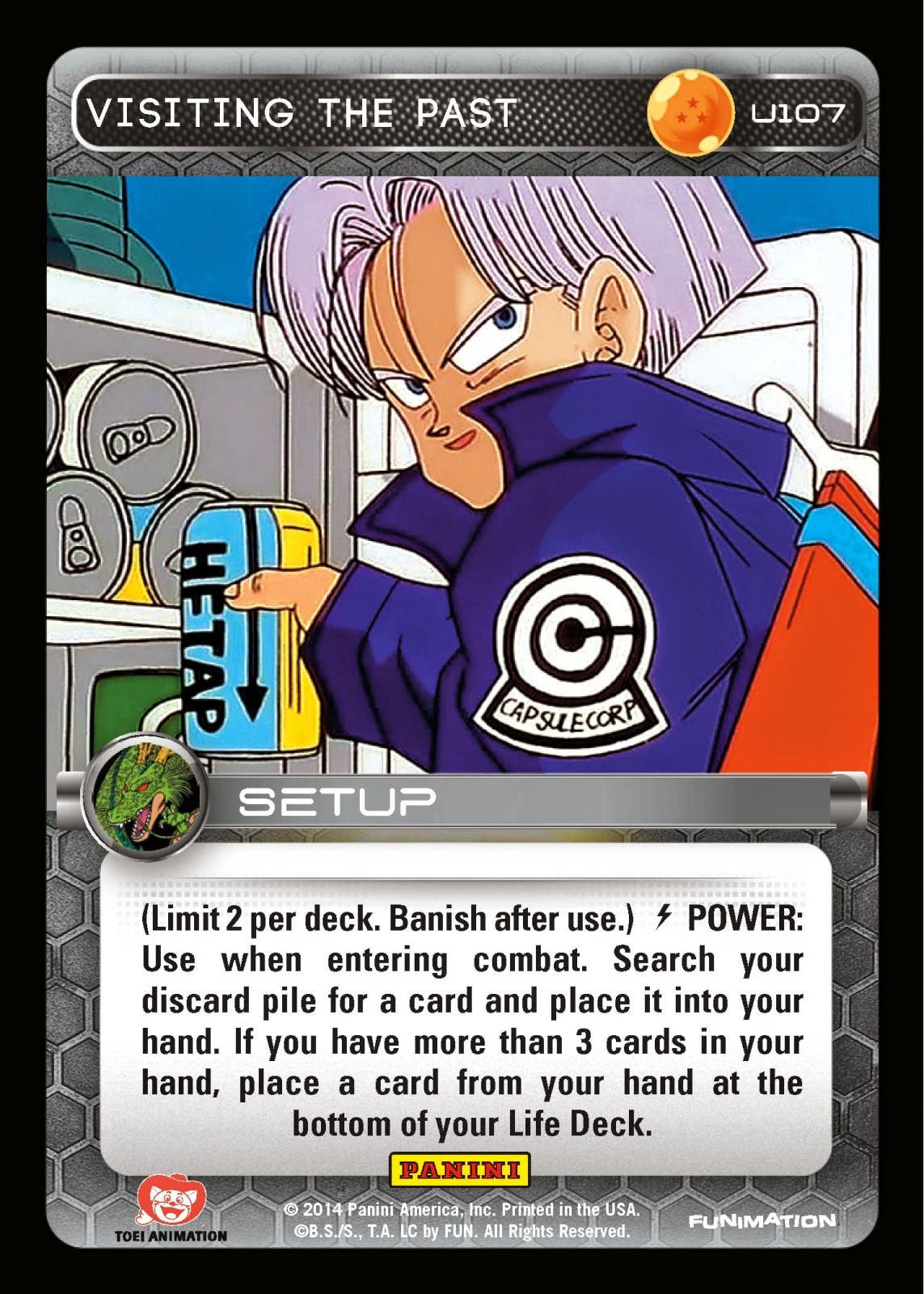 So, here's a different proposition:

Common cards: Only cards that you can have three copies of are allowed to be common rarity. This includes not allowing Dragon Balls, Allies, or Main Personalities at common.

Dragon Balls: Dragon Balls can exist at uncommon with some Dragon Balls existing at higher rarities. Since every deck can play with Dragon Balls and don't require a full set to be included within the deck, unlike Main Personalities, this is fine.

"Limit 2" cards: The lowest rarity these should be at are uncommon. You can quite easily end up with three copies of a card if it's at common. At least with uncommon, for the player who doesn't buy multiple boxes, you might just very well only get 2 copies of a card.

"Limit 1" cards: Keep these at rare. Even Freestyle cards would end up with an overflow at uncommon.

Ally cards: Uncommon or rare cards. Since multiple decks can each use the same allies from your collection of cards, uncommon can be an O.K. rarity for these types of cards.

Main Personality cards: Always, ALWAYS have these cards be at the same rarity. That way, there won't be any waste of cardboard, as mentioned above of what would occur. You will never need more copies of any one particular Level of MP than the other Levels.

Common is too common for Main Personalities and rare is too rare. Therefore, uncommon is a good rarity for every single one of those Levels of every single booster-pack Main Personality. Yes, this means even Level 4 Trunks who is depicted as a Super Saiyan would be uncommon. Feels weird, but if it's for the (un)common good. 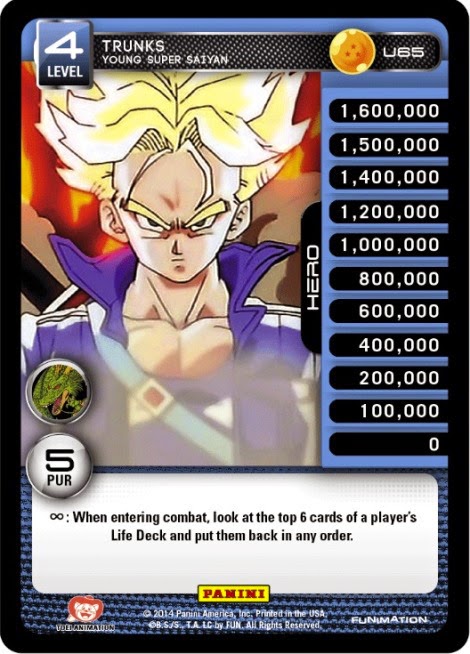 
There is an additional idea, however, regarding Main Personality cards. Inspired by the previous iteration of Dragon Ball Z TCG, rare and ultra rare Main Personality cards would be O.K. as well, as long as those are simply alternative Level cards that supplement the ones at uncommon. For example, a set that gets released in the future could have Gohan Level 1, 2, 3, and 4 at uncommon, and then a Level 1 Gohan at rare that is different from the uncommon Level 1 Gohan. Perhaps this one is wearing his school clothes, if it's during Buu Saga. Etc.

Check out what the previous iteration of the DBZ TCG did with Majin Vegeta. First there was this set of Vegetas that were uncommon and rare (as opposed to Panini's common and uncommon pattern):

And then there are these more rare alternative cards for Level 1 (besides the unnecessary ultra rare Level 5 you were able to use seen above): 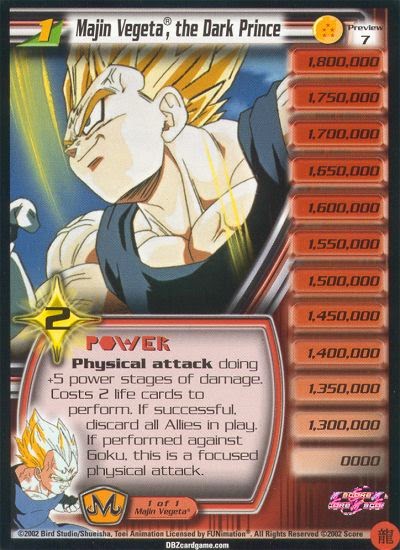 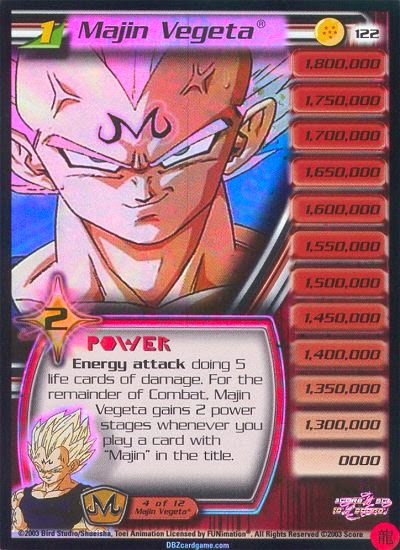 There are OPTIONS for your Majin Vegeta. Not simply dead cards. Like common Level 1 Trunks.


Next, I want to bring the topic to the starter decks. There is so much wrong going on with these starters. I won't speak too much on this tangent to the "common problem" that is the common Main Personality cards such as Level 1 Trunks, but here's a list of everything that's wrong:


That's enough of that. Let's talk about a radical solution proposition for the issue of obtaining too many wasted copies of Level 1 Trunks 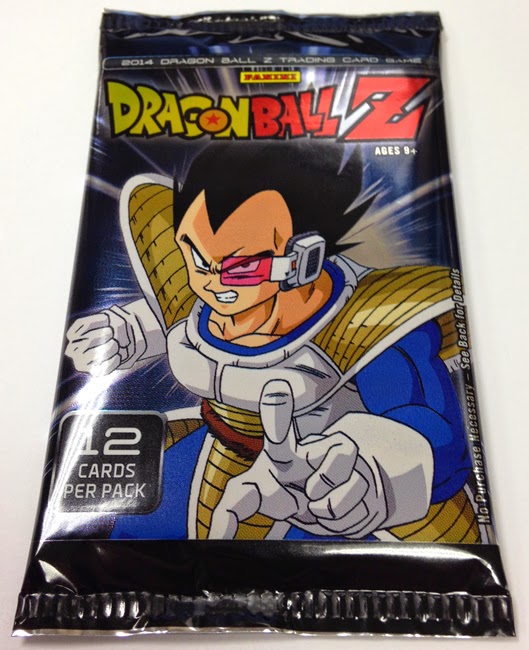 
How about changing this to:

In addition to this, all the Starter-Only cards personalities would be thrown into the mix. This change would mean the following, for Set 1, for opening a single booster pack:
With only 1 out of 55 chance of getting a repeat of a Main Personality card, then one can pretty much safely purchase two booster boxes of cards (24 packs each box) and not waste as many cards on average. Moreover, this change would mean the player who decides to buy two booster boxes in hopes of finding an ultra rare card would not be punished with many useless copies of Level 1 Trunks.

With all this said, as a friend has reminded me, Panini DOES make baseball cards, the world of collecting such items being one I'm unfamiliar with, which could just be the norm for those who buy many packs of baseballs cards, perhaps in hopes of finding those rare cards, which results in many common pieces of printed cardboard to be tossed into the garbage.

Thanks for hearing me out on this. That's all I have for today, Z Warriors / card slingers.