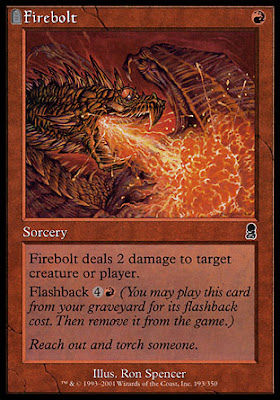 Today is different. Here's why. Redesign: 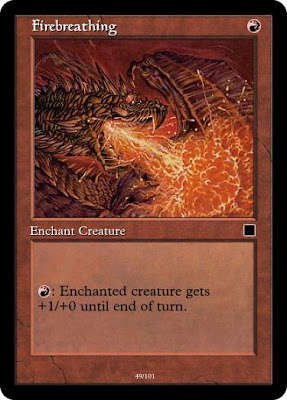 Yes, I know Firebreathing exists, but that's exactly why I chose to do a reprint. I have a theory on Firebolt. The theory is that this card slot in the Odyssey design file went through the situation that is EXACTLY what my Daily Card Redesign series is all about. Firebolt wasn't always Firebolt. It used to be Firebreathing. Check out the original art to Firebreathing: Firebolt's art is an homage to this original art for Firebreathing. The same color of skin, the same action, the same eyes, the same spiky spine, and the same beak-like curvature at the end of its snout!

I figured this out because, when I was trying to figure out what to redesign for Firebolt, the dragon was, well, breathing fire. I thought of doing a Firebreathing variant. But then something clicked - Firebolt's art seemed... familiar. I checked out Firebreathing's original art; and, sure enough, that's what it was. It's the same dragon!

For whatever reason, Firebreathing was in Odyssey complete with art that references the original Firebreathing. At the last minute, Firebreathing was scrapped. There was a need to come up with a replacement design with the restrictions of the art, name, rarity, color, etc. "Firebolt" as a name was cleverly used and this shock variant was realized.

And don't worry. Red in Odyssey still has Flame Burst. Among other direct damage spells. Also, red only has one common Aura, so that checks out (green has two while blue has three).
at 10:09 AM