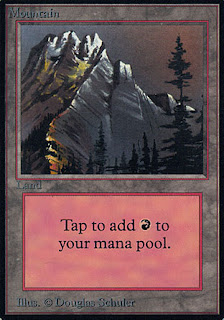 This is what the Random Card button in Gatherer gave me. Mountain. And there's absolutely nothing I can do because it's a perfect and fundamental card. Let's try again. 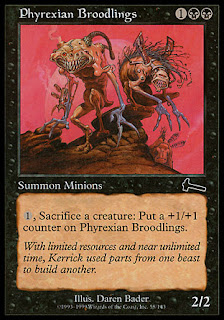 There. Now its redesign: 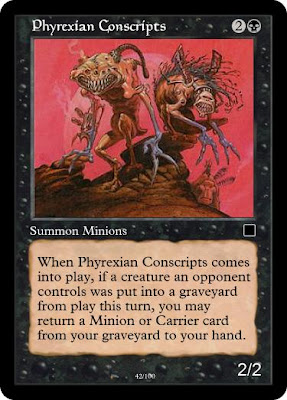 The original design I'm replacing is awesomely flavorful. The power/toughness on the card represented how many Phyrexians were grouped together. The third one looming in the background represents one of the upcoming +1/+1 counters that comes from your sacrifice to the Phyrexian "cause."

I wanted to do Minion tokens but I remembered what Wobbles had me realize when I designed my version of Entangling Vines: if this is late in development, and art is already locked in, I probably can't come up with a design that calls for a brand new token. Because that would need art, and it's too late by then in this scenario I'm redesigning under. So, no tokens.

EDIT: I had forgotten that token cards didn't exist in booster packs back then, so this was actually a non-issue.

Within Urza's Legacy, a good portion of black's creatures are either Minion or Carrier. These Phyrexians! And the Carriers kill themselves to (hopefully) off an opposing creature. I tried to design something that played well with that while also keeping with the flavor that a creature that "dies" is actually being transformed into a Phyrexian.

It's like a Gravedigger, but one mana cheaper. The drawback is that it has restrictions. And since Carriers kill themselves to kill other creatures, you'll probably have a target to bring back!
at 1:28 PM