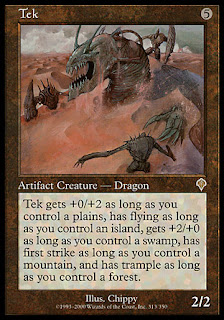 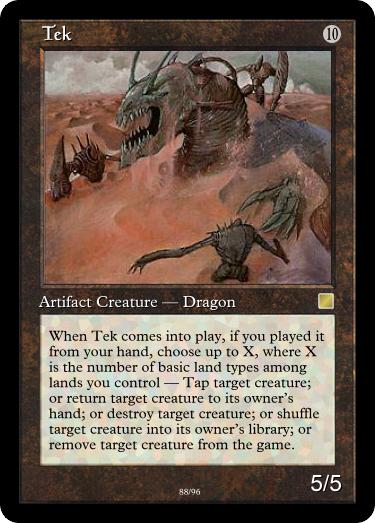 Quite a bit happening here! I got excited to do something different with the modes type of effect. Usually, it's "choose one." In the past, there's also been "choose one or both" and "choose two." But never has there been "choose up to X, where X is..." (well, except for the wording in a different context with Discordant Dirge.) I thought it fitting in this slot, since its set, Invasion, cares about having domain. This rewards you more the more basic land types you have.

At first, I wanted to find five differently-colored effects (white, blue, black, red, green). But, then I realized how I wasn't giving different rewards depending on basic land type anymore. I was just looking for a number. This freed me up to do something different.

I looked to the art and noticed how Tek is surprising this group of creatures by emerging from the sand. A bunch of creatures being ambushed... which led me to doing five different effects that mess with creatures! Of course, this meant it would have to cost a LOT. And so I did make sure it wouldn't be too broken and costed it at 10. After all, getting to "kill" three creatures, bounce one creature, and tap a final creature is pretty powerful. Plague Wind allows for one-sided killing for 9. But that's black. So, I made this cost 10, even though the restriction of basic land types are there. I figure that even having just two basic land types meaning killing two creatures was still worthwhile, so this had to cost more.

I made sure the effect could only happen when you cast it from your hand, because I'm afraid of reanimator and other effects that cheat this card into play would abuse this card.

Notice that, for this type of effect to be an instant or sorcery, I would either have to make this a colorless spell or make it a white-blue-black colored spell. Colorless instants/sorceries don't really exist normally, and there are rare instances when you can do this as a WUB colored spell. So, artifact creature "enters the battlefield" effect it is!
at 12:34 PM