I passed the multiple-choice test. I'm in the top 101 people of The Great Designer Search 2, and it's only going to get a lot more difficult within the next two days. Nay, I don't even have 48 hours. So, here's the deal:

Mark Rosewater posted up the design test for Round 3. And if you'd like to help me out designing some cards for my challenge (I'm going to need to choose four designs not done by me), here are the steps you'll need to take (You might have already taken care of a few things.)

1. Go to my Wiki page here.
2. If you haven't signed up for the Wizards' Community forums, click on the "Sign Up" link in the upper-right hand corner of the page and sign up.
3. If you haven't joined the Magic: The Gathering group, click on the "Join Group" link below the group's avatar image along the left side of the page. (If you aren't on the same page of that group, you can click on the link to my page in the first step, again. Then, you'll see it.)
4. Read the top of my page under the section "Round 3: Design Test" Assignment. Then just follow the instructions.

So, below, I've got the tribes and mechanics described for you, so that you can be on your way.

Bird (Vulture folk) - White/Black
These guys are vultures. They fly, for the most part. I haven't defined much of a personality for them, so imagine what you like.

Gnome - Blue/Red
Gnomes make their debut as a major tribe in this set. There's only be one non-artifact gnome in Magic. This will fix that. Gnomes are tricky. They like to "play around" with magic, pull pranks, and are curious. They make up for the absence of Goblin mischief and stature with their own wily and short ways.

Crocodile (Crocodile folk) - Black/Green
This race isn't as well defined, either. Well, except, that they're the largest of the five species listed here. Note that the Crocodile card listed below is the smallest Crocodile's printed power/toughness. Don't take that card as a final card, just like the keyword names chosen that's on the example cards below.

Dwarf - Red/White
This is a proud race. They are tough, sturdy, and hard-headed. The choice of white dwarves stemmed from Eventide's hybrid red/white dwarves. As red/white are functionally about combat, this fits the dwarves perfectly.

Frog (Frog folk) - Green/Blue
These frogs are bipedal frog folk. They're NOT like the Anurid race from the plane of Dominaria. Those guys are, like, beasts! This plane's frogs are not beasts. They are intelligent dudes. Again, not much personality imbued in these guys.

Dreams and Nightmares
I'm not sure whether to add these types. If I do add them, they'll span multiple colors. If I add only Nightmares, I'll spread them all across the five colors. Same thing if I choose Dreams. If, however, I choose both, then I'm thinking of doing it like the Odyssey block and put Nightmares in blue, black, and red. And Dreams would be in green and white. Nightmares would have the Trauma mechanic (described below) and Dreams would have flashback (Yes, the first time creatures would have flashback. They work like Evoke does, since they'll have effects that trigger from you casting it and would get exiled when the spell resolves. Except, you know, you actually get to use the creature once before they die and is flashbacked (flashed back?)).

Classes for Ally Pairs
I've decided that the race creature types are going to pair two enemy colors when you want to build a deck around a certain race. However, for more diversity, I'm going to use the classes to pair ally colors. Except, in a broader sense (like three colors to a class). For example, Wizards will only be in blue, black, and red. This means that there can be blue/black Wizard decks, black/red Wizard decks, and (blue/red Wizard and/or blue/red Gnome) decks. The main focus won't be on these ally pairs, but they will be there as a minor theme. I'm not sure whether to include tribal cards that reference classes. But, the fellowship mechanic will definitely work with class types.

And I finally have four mechanics, though, a couple may need a bit of polish. Here they are, with some card mock-ups for visual appeal.

Fellowship -- Whenever you play a card sharing a subtype with CARDNAME, DO THIS.

And here's an example card: 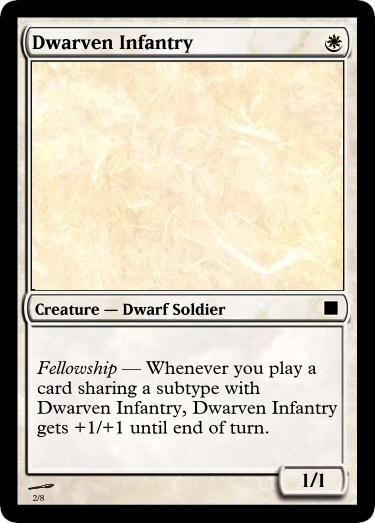 Trauma
Trauma NUMBER (Whenever this creature would deal damage to a player, that player mills NUMBER cards intead.)
This card was modified off of Evan Erwin's Erode mechanic. His blog post debuting the mechanic is here: http://www.misterorange.com/?p=220 And the mechanic on the Wiki is here (one of the pages of MTG Color Pie's Wiki, in fact): http://community.wizards.com/magicthegathering/wiki/Labs:Gds/gds2/mtgcolorpie/FurnitureShopping1
WHOA! Disclaimer: There's "mill" as an action word now. Just like with scrying and regenerating, the "Target player puts the top X cards of his or her library into his or her graveyard" wording has been shortened to "Target player mills X cards." As this was a "library-themed" block, I thought it'd be proper to take take a risk and take action here with a commonly used cluster of words.
Here's an example card: 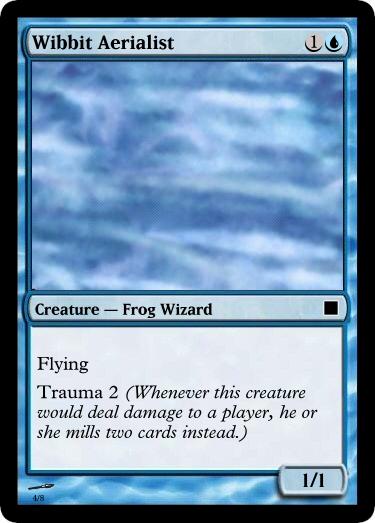 Flashback
This one's not new, but the placement of flashback on creatures is new. When you cast a creature from your graveyard via flashback, that creature will trigger its "when you cast me, stuff happens" ability, then it is exiled. It's like an evoke creature entering the battlefield (or leaving it), then sacrificing it. Here's an example: 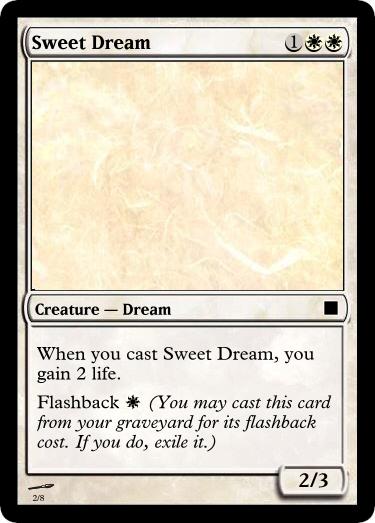 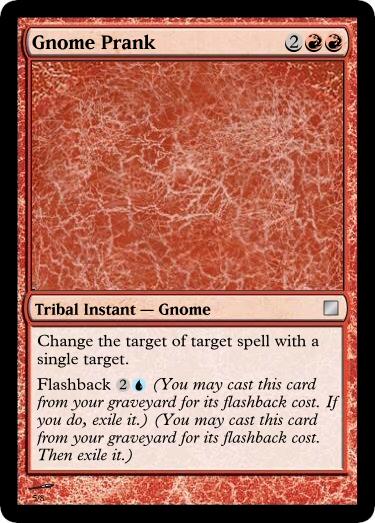 Hold Thought
Hold Thought (Play with the top card of your library revealed. Whenever you would draw a card, you may draw the second card from the top of your library instead.)
Most, if not all, cards that have this ability have a second ability that interacts with the top card. Most often, the parameters for successful interaction is if the top card shares a subtype with the card with Hold Thought.
I really don't like the name of this mechanic. Also, I'm wondering whether this mechanic can be done better. I believe this one is the weakest of all (unless you count that flashback-ing isn't innovating enough, maybe?). However, it is caught up in the synergy among all the mechanics. Trauma is good for ruining cards that care about the top card of card of the library (Hold Thought). Of course, those cards put into the graveyard may be flashback cards, so that's good for the player being milled. And casting multiple spells to trigger Fellowship is desired, so, flashback can help with that.
Here's an example of this mechanic, anyway: 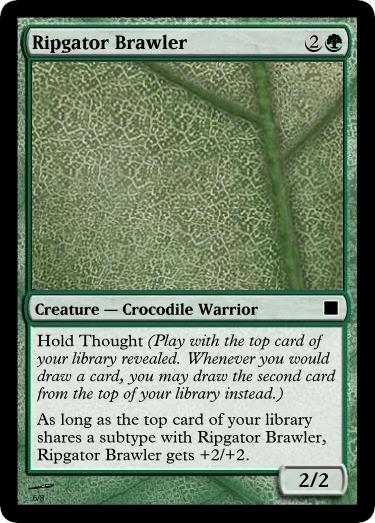 Easy as pie, right? Also, I know that "drawing the second card from the top of your library" may be a controversial thing since you don't draw from there, you "put" from there. As in, "put the second card from the top of your library into your hand". But, since it's already so wordy, I decided to short-hand it.
For each of the mechanics, I tried to incorporate the fact that this plane resides in the mind of a planeswalker. (That's why it's a "library matters" theme.). Well, with the exception of fellowship. Anyway, if you'd like to submit your designs for my efforts, just go back to the top of this post and follow those steps.
Cheers,
Brad
at 12:49 AM