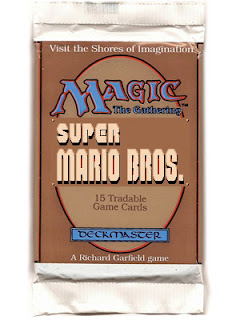 You know how when you’ve been working on a complex or difficult problem, and you’re engaged in some “mindless activity,” allowing your brain to ferment some solutions and ideas related to that problem? Usually, it’s taking a walk, taking a shower, or baking your favorite brownies for the hundredth time. And the problem doesn’t even have to be game design related, it could be trying to figure out how to make a meal out of the scraps you have left on the night before you get your next paycheck. Anyway, today, I chose an unusual mindless activity: playing the original Super Mario Bros. video game.
Well, I was being stubbornly optimistic that playing Super Mario Bros. can be an effective mindless activity. I was trying to figure out what to do next as a Magic designer on the public side of The Great Designer Search 2. The fourth challenge (creating the perfect booster pack) had just been judged, the fifth challenge was announced, and I was thinking, “O.K. …There’s lots of stuff going on now. People are talking about the judge’s comments and how to go about the fifth challenge. Should I dive right into those conversations? Should I do a blog post about how I would go about this challenge like I did for how to create a perfect booster pack for the fourth challenge? I’m not even familiar with intro packs myself, so it’d take some research to even get started on this monster of a challenge!” So, what I did was end up writing this post, which doesn’t even have anything to do with challenge five. It has to do with challenge four, actually.
A quick aside: It’s not all that crazy to consider that I’d be using little brainpower when playing Super Mario Bros. Some stats: I’ve beaten the game multiple times, my best speed run is less than seven minutes, and I’ve beaten the first level while blindfolded. So, it’s safe to say that, unlike the average person, when I play Super Mario Bros., more of my brainpower will be spent, consciously or subconsciously, on difficult problems that are on my mind. The question is whether or it’s enough to consider “playing Super Mario Bros.” in the same ballpark as effective mindless activities such as “showering” and “toilet-ing.”
Nonetheless, I was playing Super Mario Bros. and got a game over. I returned to the title screen. Some seconds later, the “attract mode” started playing (Well, it’s in the style of arcade games’ attract modes, even though, in console games’ case, the game has already been bought and doesn’t need to attract attention to itself). That’s when some example gameplay is shown for some amount of seconds. And I discovered that there are two different types of gameplay examples for Super Mario Bros., both switching off to the other after each return to the title screen and subsequent wait of a few seconds.  And one of them is a horrible example. So, let’s pretend that one doesn’t exist.

However, the other gameplay example was perfect in that it showed all of what the player needs to know about the basic gameplay of Super Mario Bros. That’s when I realized that creating the perfect booster pack of your set is just like creating the perfect gameplay example shown during the “attract mode” of arcade games. One wants you to buy more cards of the set while the other wants you to insert your quarters. They both demonstrate the gameplay mechanics and try to get you excited about the game/set. So, then, I paid close attention to the “good” gameplay example and this is what it showed me:
·         I can walk forward and backward.
·         I can jump.
·         I can jump into a block with a question mark and a coin can come out of it.
·         I can jump onto a walking brown mushroom dude with an angry face and squish him.
·         I can walk on top of the floating brick and question mark blocks, which may help me reach even higher-up coin blocks.
·         A sliding mushroom can come out of a coin block. If I touch it, it will make me double in size.
·         Letting an angry-faced mushroom dude touch me while big makes me smaller.
·         Letting an angry-faced mushroom dude touch me while I’m small is a Bad Thing™. It looks like it ends my game.
·         I can’t walk left and make the screen scroll left. Once I scroll forward, there’s no scrolling back. 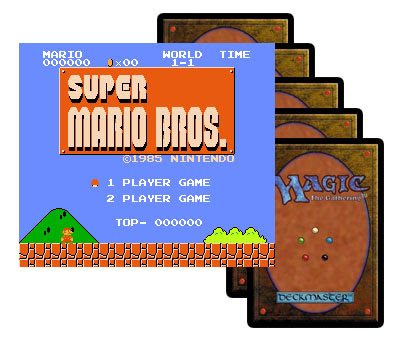 As “cards”, they’d look like (in order of appearance): Walk Forward, Jump, Hit Block for Coin, Walk Backward, Jump Onto Angry Mushroom Dude, Hit Block for Sliding Mushroom,  Walk on Blocks, Mushroom Makes You Bigger, Reach Higher Block to Hit By Standing on Other Blocks, Can’t Walk Backward, Touching Angry Mushroom Dude While Big Makes You Small, Touching Angry Mushroom Dude While Small Ends The Game
And that’s pretty much what Super Mario Bros. is all about. All that in about twenty seconds. Sure, there’s more to it, but that’s part of the discovery part of the game, like in Magic. There’s some stuff not explained like whether you can break brick blocks or go down a pipe, though. If I was a new player and played more into Mario, I would discover bottomless pits, other enemies besides goombas, other types of levels, other power-ups, secrets (like the especially awesome warp pipes), bowser battles, the fact that there’s a princess to save but is in another castle, …and another, …and yet another. And whatever else I didn’t mention.
So, what can we conclude now? For you video game developers, make sure your “attract mode” gameplay accurately represents each element of the game’s gameplay, if you’re ever going to include one (Well, you’d be silly to not make one of these if you’re making an arcade game!) For you Magic designers, umm… well, now you can feel that feeling of reading something differently related to Magic design? It’s more like an “I’ve made an interesting observation that correlates two different game mediums, by jove!” And I’d be twiddling my mustache. If I had one respectable enough. Yeah.