As I was clickity-clackity-ing a response to Trevor Murdock’s guest post on fellow Magic: The Gathering design blog Goblin Artisans, I found that what I had to say would require a number of words resulting in a far greater size of a reply than would be usual for a blog post comment. Then it hit me that I’ve found my next blog post topic. Thanks, Trevor, for writing about Murder and pondering about the possibilities of “The Perfect Cycle.”

First of all, you saw that Cancel and Murder both cost 1CC and sought the possible three other cards in the cycle of 1CC “perfect spells.” I appreciate this endeavor as it only serves to strengthen us as designers. However, I don’t consider anything a pattern until I have three instances of such a pattern. In my case, I would chalk up Cancel and Murder’s similar mana cost to coincidence.

Additionally, Cancel used to be Counterspell, and the “perfect” effect of “Counter target spell” had already been created at UU. If Cancel was never introduced to fix the power level of Counterspell, we would have just a single card left, Murder, in a supposed perfect 1CC cycle.

What I do pay attention to, though, is the wording of the effect and the name of the spell that produces such effect. I consider both Murder and “Destroy target creature.” to be such a perfect marriage of flavor and elegance. The same goes for Cancel and “Counter target spell.” Why is this? Because every part of the card makes sense, the effect is boiled down to its simplest form, and the card couldn’t be designed any other way. As an example, Time Stop’s “End the turn.” is a beautiful design. You can’t use fewer words to produce Time Stop’s effect. And it does feel like you’re stopping time. The turn is a progression of time, and you just ended it.

Yet, Time Stop costs 4UU – six mana. That’s just a result of how powerful the effect is in terms of gameplay. The same goes for Cancel and Murder.

I’ve noticed something when I’m trying to think of the most basic form of other effects: Spells with effects that have numbers in them often fail at being those perfectly elegant designs. Cards like Lightning Bolt and Giant Growth are fantastic staple cards of Magic: The Gathering. But there’s just one teeny-weeny thing that probably couldn’t be helped that stop them from entering the same realm as Cancel and Murder: A Lightning Bolt dealing three damage is arbitrary. A Giant Growth growing your creature three sizes larger is the same way. But they’re perfect gameplay-wise. …Just not in regards to flavor.
An example of an attempt to make sense of cards that use arbitrary numbers in the effect to go with the name is Divination. I love that “Draw two cards.” is just three words, but it actually doesn’t make sense to me why Divination is just two cards. Why not one card or three? As somewhat proof that there is something there to worry about in terms of the numbers used in the effect, consider the Magic 2013 art of Divination: There are two keys depicted. Ah, you see? Two keys in the art make the drawing of two cards make a bit more sense for Divination, right guys?

Ah, but you might say that, by this logic, all cards that require a numerical value in the effect are doomed to be “imperfect” and never be able to be considered as highly as Cancel and Murder. This is where I point out Hex. Hex destroys six target creatures specifically, yet, the name itself doesn’t just mean that something negative is happening to the targets – it also means “six.” Perfect.

So when we’re designing cards that use numbers, if we seek to boil down an effect of say, “CARDNAME deals 5 damage to target creature or player,” we should look for why the effect is dealing five damage specifically and name the spell accordingly. For this effect, I would say that something involving a hand or foot, which have five fingers and toes respectively, would serve this purpose. The fact that we have two eyes can help serve to craft an effect that involves the number two, for example. Foresee was almost a perfect card if it weren’t for the pesky “then draw two cards” within the effect. Seeing into the future is what Scry is doing, and the play on words with “fore” and “four” means “Scry 4” makes sense. And, yes, the art is also doing what Divination’s art is doing in that it’s helping the spell make more sense to the player.

When it comes to card types, I don’t worry about that too much for the same reason I don’t with the mana cost. These things just serve the gameplay and are not as important as the name and the effect. However, when it comes to creatures, I believe it gets a bit trickier to achieve “perfection.”

First of all, in most cases, a creature’s name can’t be as elegant as sorceries and instants due to the fact that, for example, Goblins come in all sorts of shapes and sizes across the planes. But Murder is always about killing. You can’t just design a card called Goblin (or Angel or Vampire). What kind of Goblin is it? Naturally, to help create “perfect creatures,” just like with cards like Cancel and Murder, you’d have to use names that aren’t specific to a certain plane. So, a name like Raging Goblin is perfect. While Goblins vary across the planes, there will always be rage.

For creature types, consider the type “Giant.” Giant is a race. But, taking a page from “Hex,” it has a double meaning in that it could also mean large. So, if we have, say, a Giant Warrior as a name for a card, those words could be the creature types, too. Cat Warriors exist, and it’s of type “Cat” and “Warrior,” and its 2/2 does a decent job at portraying that there is more than one of  them. Not perfect, of course, but a decent job.

If a creature has “Mountainwalk,” perhaps it is card called “Mountain Walker.” Of course, this example leads to an arbitrary power/toughness and creature types that don’t make the best of sense. But, you catch my drift. Let all the components of a creature card work perfectly together to create that card that couldn’t have existed any other way.

Here’s another attempt: Flying Warrior as a name, creature type “Insect” “Warrior,” and it has the flying ability. The art depicts a fly holding a sword. A flying warrior! That leaves the power/toughness not tying in perfectly with the name, types, and ability. Ah, well. Also, perhaps the word pun of “flying” with “fly” was too much of a stretch.

Lastly, I’ll leave you with a card that tries to be perfect in regards to the power/toughness (by employing the power of homonym puns), but must be silver-bordered, and doesn’t quite make sense flavorwise for the creature type used and how large the power and toughness is as well as what makes this Warrior of the Tutu variety (besides depicting it within the art): 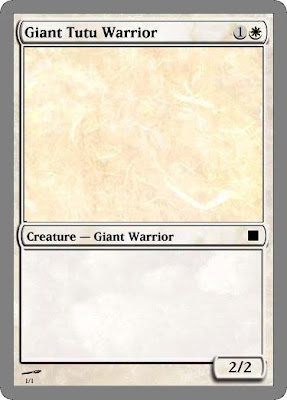