Guts of Glory: A Kickstarter Board Game 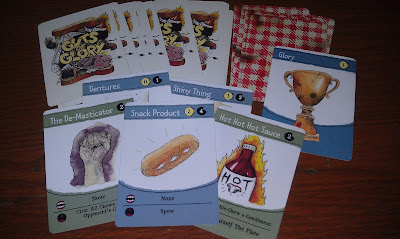 Too Long, Didn’t Read: If you like board/card games and are a fan of thematic/flavorful (hah, literally) games that are humorous and easy to pick up and play; check out the Guts of Glory board game on Kickstarter.  It’s a game about becoming the eating competition champion and is set in a post-apocalyptic world. Radical, right? The game’s Kickstarter has already met its goal, so you’ll know you’ll get a copy if you back the project. NOTE: The Kickstarter has just 15 hours to go, so click here to check it out and become a backer if this game sounds awesome to you.

Now, for the long version:

It’s PAX Prime 2012, and I was walking into the Sheraton hotel where the Kickstarter area was and saying hello to a couple peeps at the Cards Against Humanity booth.  I also meandered around, looking at each of the Kickstarter booths to see if anything interested me. One booth caught my eye – there was a card game project! If any game, physical or digital, has a card-based component; my infatuation with the game automatically increases in at least the tiniest bit, regardless of whether I’ve experienced the gameplay or not. This card game I saw, and eventually played, is glorious – no, really, it’s called Guts of Glory.

All the Glory Details

I won’t go too much into detail in how to play Guts of Glory here, as that is best explained by the creators themselves on their Kickstarter. With that said, in this game, you chew and spew (spit out) foods and condiments, competing with the other players to be the first to make it to the end of the “road to glory.” The world that this food-eating game takes place in, though, is a post-apocalyptic one – a great design choice, opening the doors for all sorts of card designs with fun concepts.

If this game were set in the modern-day world, imagine the kind of food and condiment cards you’d include in this game – the craziest you might be able to get are the tofu/veggie replacements and foods that are more unusual like frog legs (depending on your audience, this might not be unusual). Not as exciting! 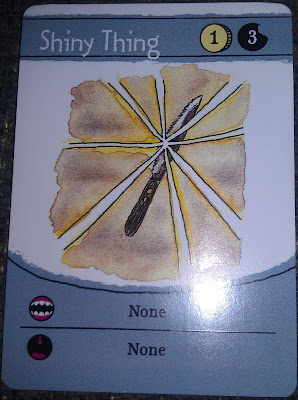 Nay, with the post-apocalyptic theme, where food is scarce and meager, you then have liberty to not only be unrealistic; but, storywise, being hard-up for food means you’re masticating and swallowing some more unusual stuff.

Where this game excels – besides being a game that is more accessible to a wider audience than a complex fantasy swords-and-sorcery type of game like a lot of products out there – is its flavor. The food-eating flavor is baked right into the design of the game. Here’s what I mean:

Instead of an abstract row of three cards that each player must place more cards into at the beginning of each of their turns (like with some card games); you “refill the tray of food.” That’s so grokable (something that is easy to understand and “get” the concept of) for a player. Of COURSE you refill the tray of food – it’s an empty food tray with no food on it!

When you choose a food or condiment from the tray to put into your mouth, you “chew” it. And – get this – your mouth’s flavor (hehe) has also been leveraged into the game’s design. Your mouth has empty card slots laid out in a row: the sides (of your mouth) chew food while your tongue (in the middle of your mouth) handles condiments (because you taste with your tongue!). When you finish chewing, you swallow it and get glory.

You always have to chew something new every turn, but your mouth can get full, so you end up spewing something every now and then. That’s when other players can “catch” this spewed food into their own mouths to chew and swallow. Doing this is “more glorious,” so it becomes worth more glory points.

The foods and condiments themselves consist of cards like: the Hot Hot Hot Sauce, Dentures, and Snack Product (which looks like a Twinkie – and if you’ve seen Zombieland, you’ll know that the Twinkie, humorously, doesn’t expire and survives even through apocalypses). 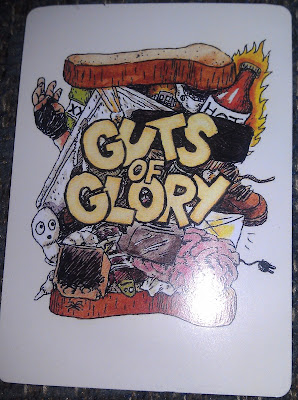 I found out all about the game by having it demoed to me by Jesse Fuchs, one of the creators of the game. Even while I was running late for a popular panel at PAX I wanted to attend, I wanted to finish up the game session that Jesse demoing with me. I enjoyed the game and wanted to return at a later time to talk more about card games and the advice I was asking for regarding production of them. And he gave me a demo copy of my own before I left! Nice guy!

So, Guts of Glory: a flavorful game – in more than one sense of the word – that’s easy to pick up and light-hearted. Pick it up if you’re looking for another multiplayer out-of-the-box card game to enjoy that’s different from the usual popular card games you might find.

As of the time I post this, though, there’s only 15 hours left for the Kickstarter, and it’s already met its goal, so you’re guaranteed to get yourself a copy. Check it out!
at 4:53 PM