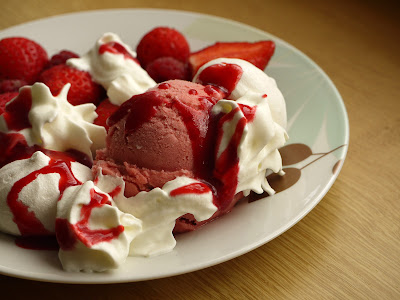 This is my second post regarding NaGa DeMon - National Game Design Month. Participating in this means that my card game project must be created with all of its necessary pieces entirely within the month of November and then played at least once. So far, I've decided my card game will have mechanical elements that emulate the prisoner's dilemma situation. Currently, I still haven't yet decided on a theme, despite the helpful feedback I've received from fellow NaGa DeMon Hunters.

As I said in my last post, while it's very normal and possible to design games without a theme (just look at all the card games that use a standard deck of playing cards), having that flavor established early on can help further game designing which in turn can help influence the theme and so on and so forth.

So, right now, I'm going to focus on cranking out some theme ideas. To help me in this process, I've decided to theme this blog post with a title referencing Baskin-Robbins' "31 Flavors." So thematic. So productive. I'm going to force myself to come up with thirty-one different themes right now as I write this. I've only got a few swimming around in my brain, so I'm excited to see what I come up with!

This is what I really should be doing at this stage. No second-thoughts and such during the brainstorming process! Just let it all flow out of my mind and put it all down. Only until after the brainstorming is finished must I begin to think critically about the theme possibilities.

But before I begin, I will first define the game mechanics that must be described within the context of each of these themes. Here they are:
So, here we go! Oh, and for the themes I list, I won't repeat ones that were already suggested to me, like an treasure hunting theme escaping from a crumbling temple due to a stolen idol (Indiana Jones). Anyway, 31 themes:
Whew! That took longer than I thought. Well, some of these are just not doable like the Teenage Mutant Ninja Turtles one. Well, I could still do it, anyway; but that specific one doesn't even have a strong flavor, and I won't be able to go very far with this project without getting into trouble or something. I'd rather have an original theme.

While writing this, I was trying not to censor myself and just let the ideas flow, so a few of these I won't actually consider, like the Jehovah's Witness one since that might be offensive (trivializes the religion, etc.) and it's not the best theme for players to get excited about. A lot more people would rather pretend to be blood-sucking vampires than Jehovah's Witnesses, I surmise.

So, now that I've written this list out, I'm going to need to decide. I could swap around some of the different parts of themes and mash them up for a better theme, too. For example, ice-cream eating firefighters. O.K., maybe the ice cream can melt, so you put the fires out? ...Bad example, but you get what I mean.

Perhaps you can help! Which of the above themes do you like most? Or perhaps you have a different idea? Thanks in advance! Let me know by leaving a comment on this post or tweeting at me: @bradleyrose
at 2:26 PM