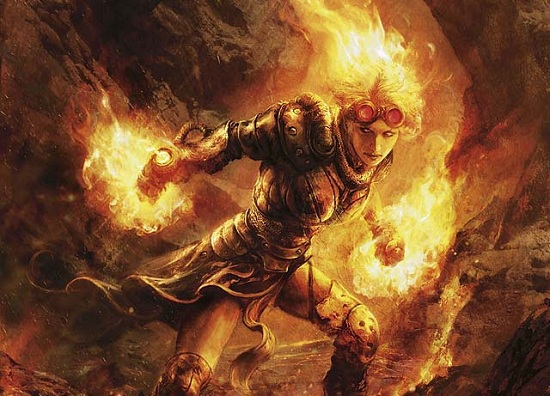 Instead of the usual pushing of the "Random Card button" within Wizards' Magic: The Gathering card database Gatherer to determine my card for the day, @RobersKirkman on Twitter happened across Chandra Nalaar as a result of his own"Random Card button pushing," and he was interested in how I would tackle this card: Chandra Nalaar. This is the first time I've taken a request like this, so why not? Let's design a replacement card for the original Chandra! 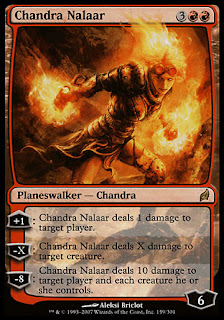 First, I discovered a unique quandary when it comes designing replacement planeswalker cards for this type of exercise. Unlike most other Magic: The Gathering cards, planeswalkers can have multiple different versions of themselves. So, when I'm designing a new card in place of the Chandra that debuted in Lorwyn, if I act like none of the other Chandras in the future have already existed yet, then it opens up the effects of those Chandras as options that I could be putting onto this Chandra. Which then actually is kinda lame to see (perhaps the next-best Chandra to debut first is exactly like Chandra Ablaze, for example). You would think, "Uh, we've already seen that before! Well, in one of the newer Chandras, of course."

So this is what I'm going to do: whenever I design a replacement card for a planeswalker or any other card that has this unique problem - I'm going to force myself to not design an effect that we've all already seen before. This is to keep my designs interesting and from not kidding myself into copping out and re-using an effect already in print due to some kind of logical reasoning or something.

Lastly, I do want to stress that while I would love to see totally bonkers planeswalkers in terms of power level, especially in Chandra's case - since she never really got to have a powerful version of herself, yet - I AM designing as if there's a hole late in development that needs filling; and that means little if no testing is done on it. This means designing "safe" cards that you know won't be too powerful to warp Magic: The Gathering formats in an unhealthy way.

With that out of the way...

Each Chandra that exists thus far deals direct damage either to players or to creatures/players. Considering I'm designing for Chandra's first incarnation as the explosive fire mage, I think it's entirely appropriate to retain this kind of effect for her first ability. So what can we do differently? Luckily, there has yet to be a Chandra that deals direct damage to creatures only. That'll be our first effect!

I still want her to be able to damage players, though. So, somewhere within the second or third ability of hers should be the ability to target players.

I'm a big fan of having at least two abilities of any particular planeswalker connecting with each other. And in Chandra's case, I enjoy imagining a fire building up inside of her until she explodes. Now, for the feeling of her building up this "fire," it would feel wrong if, along the way, she's actually throwing fireballs at creatures like the first ability we established. It's like she's letting some of that build-up eke out. So, I've decided that the '+' ability that builds up toward the "ultimate" ability shouldn't be that. 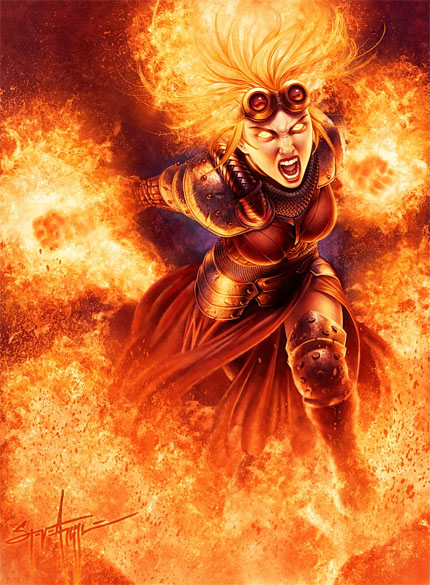 While every Chandra "explodes" with lots of fire with their ultimate, Chandra Ablaze is a good example of the kind of interaction that I like. Discarding cards that would eventually be used for the ultimate's casting of cards from the graveyard.

Here's a problem, though, with having the "build-up ability" not involve direct damage: it leaves Chandra defenseless. Part of what makes for a great planeswalker is having the ability to defend itself against threats - mostly creatures. Otherwise, they'll lose all of their loyalty counters pretty quickly.

But that's where I discover that the main issue is with keeping Chandra alive with loyalty counters - not just blocking damage. If we have the effect add loyalty counters on a higher level than most usual damage, we can have her survive as if there WERE tokens or something absorbing damage like other planeswalkers do!

But it doesn't seem right for Chandra's ability to say:

Nay, we want to tie it in to gameplay that feels right and that we would want to encourage. How about this:

"0: Whenever you cast an instant or sorcery spell this turn, put # loyalty counters on Chandra Nalaar."

The instants and sorceries thematically represent the fire spells that you're casting, and the damage isn't coming from her, so it still feels like she's building up for something big.

The mana cost is important to consider since the turn the ultimate ability "goes off" is determined by this. Usually, when uninterrupted, a Chandra will "blow up" on turn 8. Now, this Chandra is at a converted mana of five. I want to change that, and going to six or more would be a bad direction. I mean, it would make her even more sucky than she already is right now. But I don't want to do a converted mana cost of three or less since that starts to get tricky and/or unusual.

I'll do a converted mana cost of four. To differ from the other Chandra that costs four, I'll have the cost require two red mana. This is actually a smart idea since, if the cost only required a single red mana, players wouldn't be as easily able to build a predominantly, say, blue deck with some splash of red mana to get Chandra in there. Then the "build up" with casting instants and sorceries might have a lot of blue spells being cast (and rarely, if ever, red ones), which feels wrong. 2RR it is. 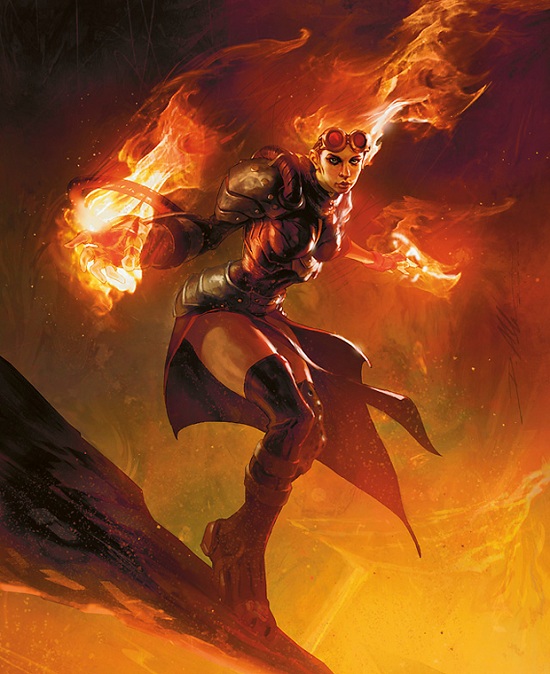 Because the mana cost is 2RR, I will attempt to have the ultimate go off, on average, in four turns. Maybe three turns if the player loyally casts instants/sorceries.

So how do we judge that? Hmm. If a deck wants to optimize on their mana each turn, they are forced to cast at least one spell a turn (and use each mana produced each turn). And let's assume that the average deck casts things on turn 2 and 3 before casting Chandra on turn 4. Preferably, one spell. So let's do math to count the number of cards a person will have as the turns go by. Let's assume the person is going first for the sake of not counting on the extra card of going second. Lastly, let's assume a burn deck running Chandra will cap out at 4 lands to maximize casting her spells.

Because I think that, to make up for having no protection, I'd like Chandra to gain 2 loyalty per instant/sorcery cast instead of a measly 1. And 3 would be out of the question. So, if I assume that the player needs to cast 4 to 5 instants/sorceries, this would be having 8 to 10 loyalty. This is on top of her starting loyalty. I'd like to have the ultimate not be so high in number since the planeswalkers are first being introduced, and we don't need to do something so crazy like Gideon, Champion of Justice just yet. That's for later - like when Gatecrash comes out and prints Gideon, Champion of Justice. 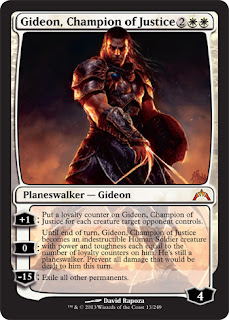 I picked 3 because 2 seemed too low and 4 is pretty beef for a red 4-drop.

Hmm. Wait a minute. Why does Chandra have to have an ability that reads like the following?

{0}:  Whenever you cast an instant or sorcery spell this turn, put 2 loyalty counters on Chandra Nalaar.

If you don't have any spells of that criteria, then you'd be screwed. And if you have a lot, especially cantrips, you can really go off the chain. How about a more controlled pace that doesn't feel helpless when you're already screwed?

{+1}: Whenever you cast an instant or sorcery spell this turn, put 1 loyalty counter on Chandra Nalaar.

Still the same result if you cast one spell, but better if you have none, and worse if you cast two spells. Seems fantastic!

So, with this in mind, if we have the player cast 4 spells, with two activations on turns 5 and 6, that would equate to +7 loyalty. So, we can still do the -10, pretty much.

Because it's so variable in how much loyalty you can gain, let's just make that creature damage scalable like with the original Chandra's -X ability.

Lastly, let's do the ultimate ability. She's going to EXPLODE. We haven't yet seen a Chandra that can hit every single target. So, I'm going to take advantage of that. And since the loyalty cost is -10, I'll make it 10 damage. Yes, similar to original Chandra's targeting of one player and their creatures for -8, but not as explosive if used in a multiplayer game. So, I'll go with that.

Also, I'm running out of time for today. Here's the replacement Chandra: 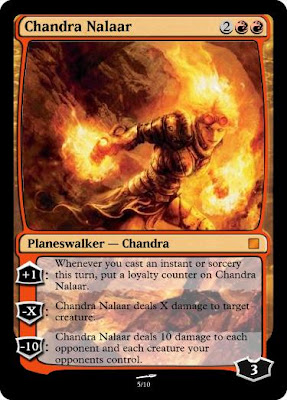