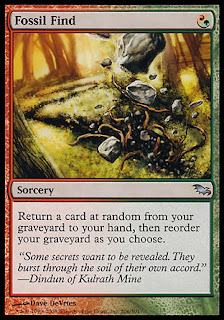 My first hybrid card replacement! So, hybrids - to design them well, you gotta find the overlap between the two colors of the hybrid card. Both red and green do trample, for example, so you can do an effect that has to do with trample for this card. But there doesn't seem to be any indication of this sort of thing happening in the art.

The first thing that comes to mind when looking at the art that both colors do is land destruction. But something more unique is going no. It looks like a fault or something is burrowing through the land. The vines/tentacles that are lashing around look like it's a living thing that is destroying the land.

Hmm... Survey the Wreckage already exists. I love that card design, by the way.

How else can this differ? How about destruction that only happens from a creature when it comes back to the battlefield through persist? Like, it burrows back to the scene, Bugs Bunny style, and ruins some land in the process? (I would hate for the land destruction to occur upon entering the battlefield, either through normal means or through persist, because that would mean there's twice the land destruction in one card, and that can lead to too much un-fun-ness.)

I wonder if creatures with persist have names that refer to them persisting? *checks*

Hmm. Sometimes. Lingering Tormenter and Restless Apparition both are like that, but Murderous Redcap and Kitchen Finks aren't. So, it's just an option that could help us name the card.

It looks like a Plant, but should I make it a Plant? I did a search on whether there were Plants in Lorwyn, Morningtide, Shadowmoor, and Eventide (both the Lorwyn and Shadowmoor mini-blocks were part of the same world and would be played together in Standard, of course). None. And because Lorwyn block and Shadowmoor block are meant to be able to go together well with one block caring about creature types and the other caring about colors, I'll make sure that this creature isn't a Plant and is actually an Elemental, instead! A burrowing elemental. 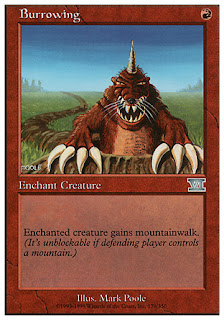 Well, hot damn! This card looks like it has the same thing as Burrowing's art, with that winding brown line in the ground! What if this was a card that had mountainwalk and forestwalk? I mean, I know that Shadowmoor cared about colors moreso than basic land types, but Tattermunge Duo from the same set had some forestwalk-granting!

Let's forget the land destruction and do this burrowing type of creature with landwalk!

Before you mention that a red creature shouldn't have forestwalk, just look at Koth's Courier! Exact same thing with Glissa's Courier! Sometimes, it happens for flavorful reasons, you know? Besides, a forest totally has the soil to burrow through. And mountains are quite burrow-through-able. I know that plains are, too; but let's not get too out of hand with what can be burrowed-through.

Since this would be the first creature that can both mountainwalk and forestwalk, I don't want to tack on any other abilities. It's already, "Whoa, that's a bit more complex and a bit more exciting!" Also, because it's a bit more evasive than the average bear, I want to make sure this as "safe" a design it can be. I'm giving it a power of 1.

O.K., now for a name that isn't "Burrowing Elemental" that fits between "Firespout" and "Giantbaiting" alphabetically. Thesaurus.com, go!

Hmm... Tough. 10 minutes left before midnight. I want to use "Fireroot" to refer to a quickly moving elemental with roots. And it also would be flavorful to have something that appears as a surprise. It just pops up from its burrowing! And both green and red have access to haste as an ability. 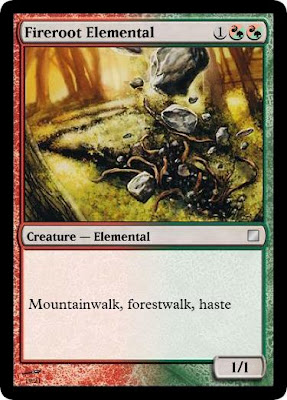