First, you learned how to play Archfrenemies in this Card Kingdom post.

Next, this Goblin Artisans post described how Archfrenemies design addressed issues in multiplayer and card rarity.

Now: here's a bit about the mechanical and flavorful themes of Archfrenemies. Some may delight Mel. Others, for Vorthos. Though, admittedly, it's a bit heavier on the Mel side of the aesthetic profile spectrum, but one might expect as much from my being Magic design-inclined.

...and if you have no idea what I'm talking about with Mel & Vorthos, check out this article.

A Trusty Mechanic (or Eight)


Every project starts somewhere, beginning from a blank slate. But let's skip that and fast forward to ending up with these five keywords as the mechanical themes of the set: surge, extort, battalion, graft, morbid.

Here are some neato things: 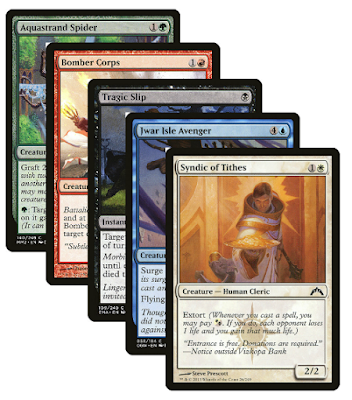 But then what about those other three keywords - goad, myriad, and undaunted? A good question you may or may not have asked just now - but let's talk about those: 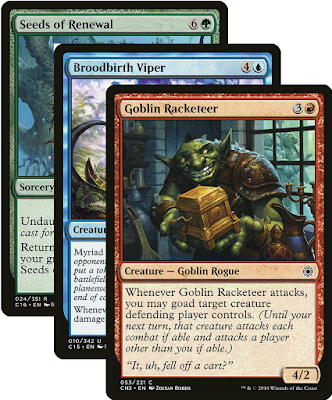 So, I knew that all the core keyword mechanics focused on the five enemy color pairings - something that hadn't been done since Apocalypse. I wanted to be sure to hammer home these pairings exist as a theme. I made a couple decisions to do this:

I started early on in the Cube design process with choosing planeswalkers, since they're the most restrictive choice.

Here's why I picked each one:


Lastly, I love how balanced this group of planeswalkers feel in being able to personally identify with them. There are multiple levels of representation amongst these walkers. <3

With that, I also wanted to make sure to make these face planeswalkers even more visible as one drafts the Archfrenemies Cube, given that they're all mythic rare. So, I ensured that every planeswalker had another card in which they make an appearance. They are: Spectral Grasp, Blast of Genius, In Garruk's Wake, Slash of Talons, and Temple of the False God.

And that's a wrap on themes! Hopefully, there was at least a little bit of something your inner Mel or Vorthos could appreciate.

I entertained the idea of having some story written that involve all five of these planeswalkers for some kind of made-up situation that makes it feel like they're "frenemies," but writing compelling stories isn't as much in my wheelhouse with my current skills. ;) Perhaps it would be told from Huatli's perspective, in poetry form?

Let me know on Twitter (@bradleyrose) if there's anything in your headcanon about why these five walkers would be running into each other. Or, otherwise, what you appreciate most of the Archfrenemies Cube's themes. Thanks for reading. :)