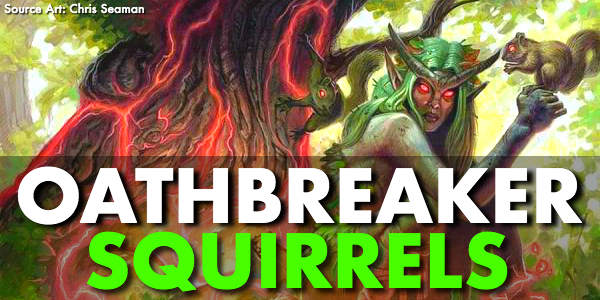 The wise word of a Pixar dog. But also a nickname some friends greeted me with during high school. I fashioned the moniker proudly as it represented my favorite part of Magic: playing my Squirrel deck.

...Then I gave my deck to a local kid, left for college, and haven’t played a Squirrel deck since.


Flashback to the Future

“Oh man. I have been ready for this moment since forever. Come on, friends! Let's go grief the universe!”
—Squirrel Girl, Marvel Rising: Part 3 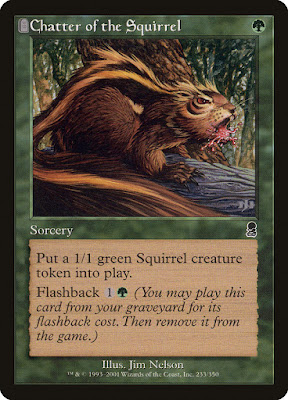 "Back in my day," when I went by "Deranged_One" (Deranged Hermit shoutout!) online, kitchen table decks were different. Sixty-card decks and playing four copies of cards. (Okay, so decks then were also different from when Magic first began. Magic always be changin'.)

Nowadays, Commander reigns in casual play with 100-card singleton. This makes filling out a deck with the already-meager number of Squirrel cards difficult. So the forest rodents have been hibernating in the shoe boxes since.
But two Squirrel-deck-impacting events happened this year:

Another card added to the Squirrel pool and a breakout sixty-card casual format?

Wrangle the Squirrels! It's time for an Oathbreaker Squirrels deck tech.

Before diving deep into the nest, here's an Oathbreaker deck list to squirrel away

(Cards in the command zone, land, and multipurpose sections state what roles they play in parentheses for other sections they normally would fall under):

(Chatter of the Squirrel) 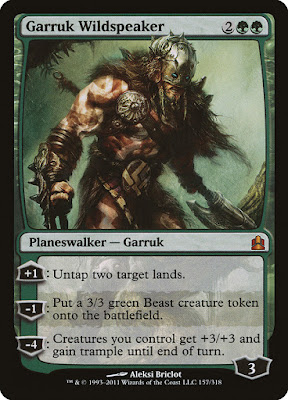 Choosing an oathbreaker and signature spell combination for Squirrels, I asked myself, “How do I want to win?” Generating infinite Squirrel tokens using Earthcraft and Squirrel Nest? That’s not my Squirrel-y style. I instead want to overrun my opponents with (a reasonable number of) Squirrel tokens swinging sideways.

There’s a problem, though. Garruk’s +1 ability is so good that he quickly becomes targeted by other players. His first ability doesn’t provide a way to protect himself from attackers. The second one creates Beast tokens, but that runs counter to Squirrels and lowers loyalty. This is where the signature spell comes into play.

A Chatter of the Squirrel signature spell both plays defense for a Garruk oathbreaker and advances your Squirrel strategy.

“It’s me manifesto. All of us hermits have one.”
—Mr. Plays With Squirrels, Boy Meets World Season 7 Episode 16 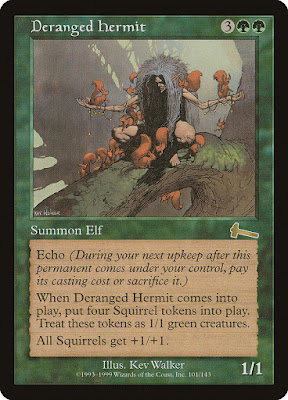 When building a Squirrel deck, I had some decisions to make. To make sure my games end up within the Squirrel-y spirit, I followed these rules:
So this does mean one thing for Garruk Wildspeaker. While some oaths break, one line must never be crossed: never create a 3/3 green Beast creature token. Even if it's a matter of life or death (in an Oathbreaker game - not real life). Because betraying the Squirrel cause is the real loss.

Form of the Squirrel

“You see that sheen on the fur? The glint in their eyes? Top quality. These are the real deal.”
—Squirrel Dealer

Here's a breakdown of categories of cards found in the Squirrel deck and what role they serve:

The best cards for your Squirrel strategy are on the higher end of the mana curve. Due to this, the early turns are devoted to ramping up quickly.

Of the different ways to ramp, the most synergistic ones involve untapping, enchanting, or fetching lands. This means no mana rocks or mana dorks that simply add mana to your mana pool. Garruk and other untappers love targeting enchanted lands. Extra lands fetched from the deck are eventually re-used for a Squirrel Wrangler endgame.

I’m normally against including tutors in my decks for the sake of experiencing gameplay variety. However, there are too few powerful Squirrel cards to fill out a deck with. If no tutors are used, the variance can result in a lackluster chittering presence. Employing tutors helps opponents experience the excitement of being trampled by forest rodents.

Because many of the nonlands are ramp spells or other supporting cards, card draw is less effective. Card draw is still good to have, but it’s best on multi-purpose and/or synergistic cards.

For example, Arch of Orazca fills out a land slot yet synergizes with Hermits. Sylvan Library was already powerful, but even better with shuffling from tutors and ramp.

Lastly, Praetor’s Counsel is the best kind of “card draw” for this deck. It’s a late-game card, which is when your key cards might be in the graveyard. Casting this will refresh your hand with virtual redundancies in your Squirrel strategy.

Heroic Intervention helps keep your Squirrels alive while Swarmyard and Yavimaya Hollow pitch to do what they can as well. As for removal...

All these Squirrels yet none of them can block a single flier?

Opponents have all these artifacts, yet you don’t have any in your deck?

Lastly, Vivien Reid and Song of the Dryads are great targeted removal for any problematic opposition.

Not all Squirrel cards are up to snuff. Each of Deep Forest Hermit and Deranged Hermit create a powerful board state. Conversely, Squirrel Mob is conditional upon two things to be great: gaining trample and already having lots of Squirrels. Even though there's already slim pickings for Squirrel cards, the tutors and deck-thinning ramp help create consistency.

For synergy, Parallel Lives and Doubling Season really beef up your Squirrel production. And as soon as Squirrel Nest enters the battlefield, Garruk and friends can untap that enchanted land.

One fateful night, bright-eyed and bushy-tailed, they rose.
—Chittering Doom 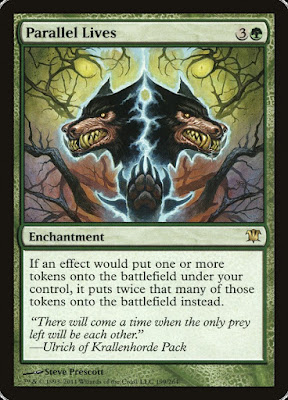 Many decks need a game plan. Even Squirrels. It's how you'll ensure you'll have a board state that makes you cackle maniacally. The first few turns will be crucial for your endgame.

Here's how it should go:


Turn One and Turn Two

There's a high number of ramp cards in the deck that cost either one or two mana. It’s crucial to cast one of these during the first or second turn of the game. This is to support a turn-three Garruk.

Cast Garruk and untap two lands with his +1 ability. From here, if you need to protect Garruk, you can cast Chatter of the Squirrel. Bonus if the remaining untapped land is a Swarmyard or Pendelhaven to help dissuade attackers.

Turn Four and Beyond

There’s a couple of powerful plays to look out for:
1) Turn Two Garruk

There's a slim chance you can cast a second-turn Garruk:


Turn one:
Play a Pendelhaven or Snow-Covered Forest
Cast an Arbor Elf.

Turn two:
Play a second land, a Pendelhaven or Snow-Covered Forest
Cast a Wild Growth or Utopia Sprawl on an untapped Forest
With Arbor Elf and the enchanted Forest, add four mana to your mana pool.
Cast Garruk


From here, still on your second turn, you’re able to +1 Garruk to untap both lands. That’ll give you three more mana to cast a heavier ramp spell, Sylvan Library, etc. What a start!
2) Hermit of Devastation

Look out for when you might be able to reach twelve mana for casting Finale of Devastation. Even with an empty board, you’re able to turn the game around or end it. Once you cast Finale with X as 10, find a Hermit. You’ll end up with at least five creatures that are at least 11/11 tramplers with haste!

"Until then, may you play your next squirrel with a grin on your face."
—Mark Rosewater, "Squirrel of My Dreams" 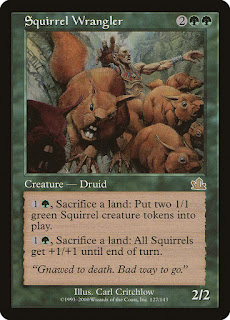 That's all I got for today. Thanks for reading!

The games of Oathbreaker facilitating a return to playing a deck of Squirrels brought me nostalgic joy. Whether it's your first time or rejoining the furry friends, I hope the Squirrels also make your table smile.

Let me know if this article moves or inspires you to play with Squirrels: I'm @bradleyrose on Twitter! If you end up heading over to CardKingdom.com to buy some Squirrel cards, could you do me a favor? Leave a comment saying it was 'cause you read this article!

Until next time, may the defeat of your opponents be aptly described by Squirrel Wrangler’s flavor text.
at 10:36 AM