These cards are in response to the challenge "Picture This" from the first Great Designer Search. To summarize, the challenge was simulating the situation of designing cards to fill in holes so late in development that all the art is already in. So, in addition to designing ten cards that each need to meet specific requirements, it had to match one of ten pieces of art provided.

So, here are the ten cards:


White (uncommon)
We need an answer to all the token making in the environment. Be subtle. 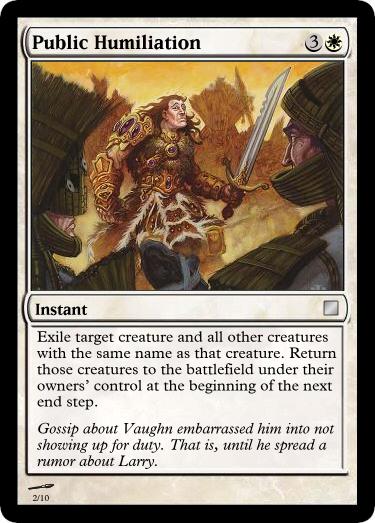 Clerics from Onslaught block are surrounding a fighting-type guy. This guy looks uncomfortable among his peers. I thought of him feeling ashamed, then tied the "flicker" effect to feel like he took a temporary leave of absence. And, of course, tokens cease to exist when they leave the battlefield.


My one concern is whether the fact that all tokens have the same name is too obscure for enough players to use this as a token-hoser. 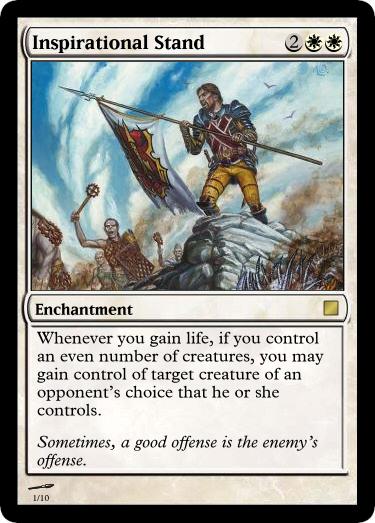 In addition to a guy in very white civilized clothes, there's a zombie in the background. This implies that there's some tango-ing with non-white creatures. One way to explain this is that these are the enemy creatures.
The challenge for the player is being able to keep up life-gain and managing the number of creatures you control to maximize your chances of triggering this ability. You'd pretty much have to build your deck around this card to accomplish this. Go, Johnny, go!
To make it feel more like random creatures from your opponent's army are swayed by your diplomacy skills, I had the opponent choose the creature. And it's more interesting that way. Bringing over the best creature from one side to the other can turn the tables quite a bit and the focus on this enchantment then fades away.
Blue (common)
We need a sorcery. No card filtering or drawing. No bounce (aka returning cards to hand). 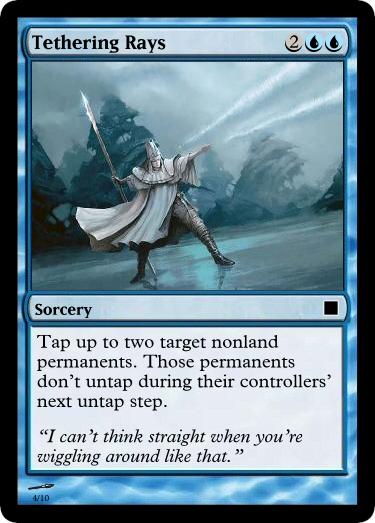 This card shows the mage discharging two streams of magic. And there's blue hues. Thus, the two targets in this blue card. The mechanic here is like Sleep, but I wanted to tap into other card types to further explore the "sleep" effect. Of course, since it can affect noncreatures, the flavor was changed to simple holding magic. It's "nonland" to prevent players from keeping an opponent's mana base tied down.
Blue (rare)
We need a creature. Something splashy for Timmy. 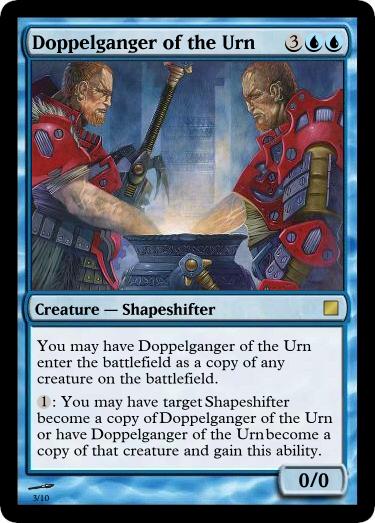 Go, go, Shapeshifter lord! In the art, instead of showing the "real guy" and the "fake guy", it's actually the Doppelganger of the Urn (so, he's fake) passing on his copy to another Shapeshifter (great, another fake!).
Black (uncommon)
Make an aura you want to put on your own creatures. 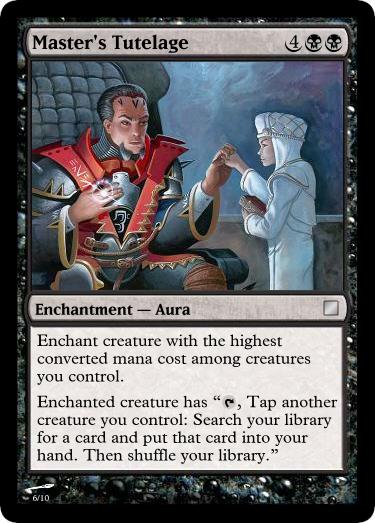 I'm a little wary of whether the restrictions on this card aren't severe enough. First of all, your most expensive card will have to decide between being used for whatever it was summoned for (attacking, for example) and tutoring. Also, I wanted to make sure that whatever creature was enchanted really did feel like the superior one, as depicted in the art. Secondly, it's vulnerable being on a creature.
Black (rare) 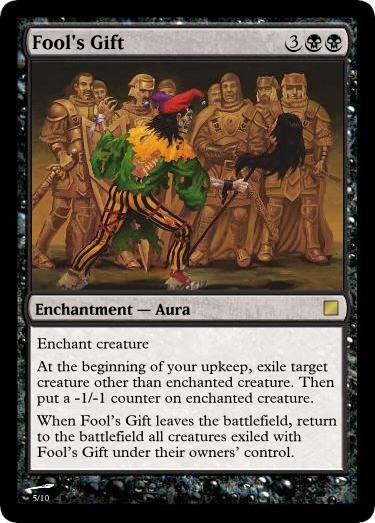 The idea here is that you're given the gift of storytelling, entertainment, and humor (a jester's gift), but the "Fool's" part shows that it comes with just the opposite (Fool's Curse). The gift is also a curse. The curse slowly is killing the enchanted creature, which means that the zombie-looking guy used to not be such a zombie-looking guy.
Also, the enchanted creature is "entertaining" creatures from participating in combat (the crowd in the background), thus the exiling. It's not until the entertainer passes away that the creatures remember that they've got a duty to attend to. I would have put "can't attack or block" instead of exiling using joke counters, but that's more white. So, I took a page from the "faceless" book, and temporarily exiled them.
Red (common)
Instant or sorcery. No direct damage or destruction (artifact or land). 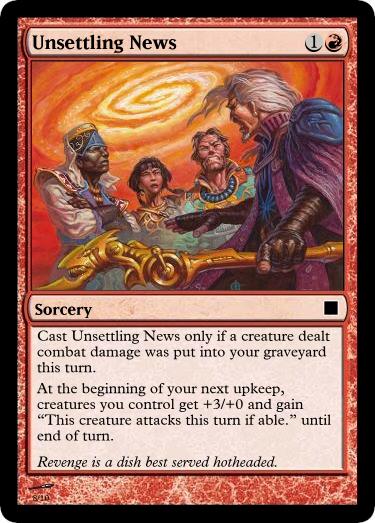 The red background and the emotions depicted on these faces tilted toward a red card for me. This card design is a little unorthodox is very much designed "top down". The moment here is being filled with rage after being informed that a fellow comrade has died.
Red (uncommon)
Creature. Want a build around me for draft (aka something that will encourage players to go down a path or paths he or she wouldn't normally had they not drafted this card early; examples of this type of card are Lightning Rift, Mark of Eviction andMomentary Blink). 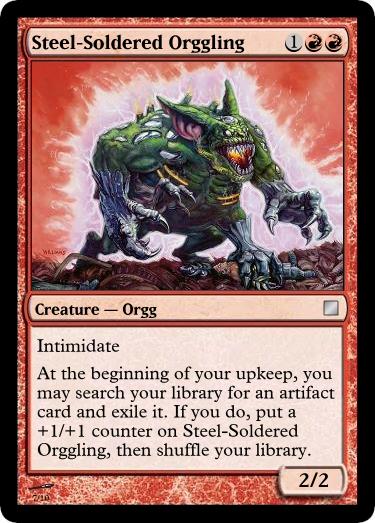 The art depicts an Orgg. I love Orggs. Also, there are only four Orggs in Magic, and the most recent one printed was actually a reprint of the original Orgg in Time Spiral block. Wizards of the Coast, print another Orgg, please! But, anyway, yeah.
All Orggs previously have been rare and big. This has to be an uncommon. And uncommon red creatures are not typically 6/6. What to do? Bam, a baby Orgg, But, it has metal on its skin. Like a karate chop solution, the title explains that the metal is soldered on from melting down artifacts. We've got our build-around: artifacts!
And, finally, it's be sad to have your ever-growing Orgg be chump blocked for a while, or even killed by enough creatures. Thus, Intimidate is there! Besides, who WOULDN'T run from a monster with four metal arms?
Green (common)
Creature. Something that costs four or more mana. 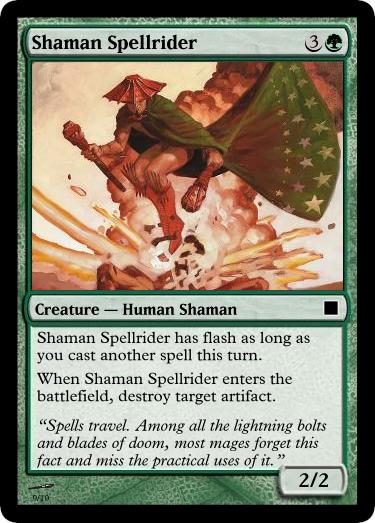 This one was a toughie. The images here don't scream "green". For this art, the green cape hues, the hand-crafted weapons he's wielding, and the morph creature husk (I made it seem like it's just an artifact. It's hard to tell, so I could get away with it to the untrained eye.) were justifications for this being in green.
So, destroying an artifact, check. But, it needed something more. We already have Viridian Shaman for ETB artifact destruction (I'm hoping that this guy is fine at common depending on which environment he comes from), so I looked to the art for clues. He looked like he was surfing that explosion, so I thought of how he was riding along with a spell being cast to help him to his destination (landing on an artifact at instant speed!).
Green (rare)
Non-creature spell. Green's lacking in "wow" factor (aka something that will impress the player by how different it is). 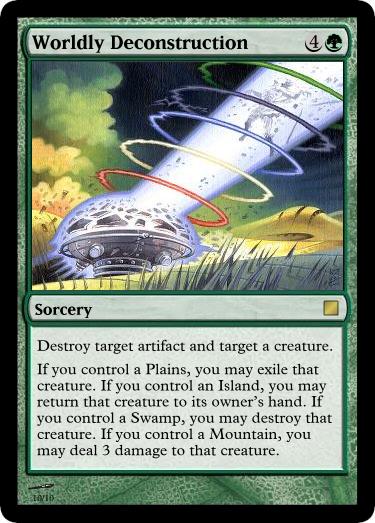 The trick here was that instead of making it seem like that metallic object is breaking itself open to shoot out a beam of colorful destruction on a dude, you make it seem like that you broke the artifact yourself and caused it to rupture a beam of colorful hate from within itself. You just turned a metallic object on the enemy's side into your own weapon.
Since it has all the colored rings, I chose green for this since green's the color that is most in tune with dealing with all five colors, being the land color and mana-fixing color. And because it's a green spell, I needed you to depend on land types and having the different land types allow you access to those color's effects.
I like how it's flexible for whatever green/X-color deck you want to make.
So, that's that. Now, to move on to the next challenge, which should be my most challenging, yet: Un-cards.
Cheers,
Brad
at 8:51 PM