As you regular readers know, here's the final, optional cycle I've decided to do for the Great Designer Search 1's "Gimme Five" challenge.

For this cycle, I knew I wanted to do "big" spells. When I say "big", I mean spells like the the Decrees, Myojins, and the epic spells. That's why these cards cost so much. I don't want to give the impression that I think that "bigger is better" whenever I attempt to design something mythic.

Anyway, since I did two loose cycles and one tight cycle for the other rarities, I decided it would be fair to put the constraint on myself of a tight cycle. The types have to be sorcery, too, as another restraint (I haven't done the sorcery type, yet.) All the mana costs have to be the same, and there must be at least one thing they all do similar yet differently. And that was... choosing to do emblems. Here's a refresher on the rules for emblems.

Whoa. That's serious business. An emblem can't be touched by the opponent! And only planeswalkers give that! The ramifications, Brad! RAMIFICATIONS! It's O.K. I created these rules for myself when designing these emblem-giving sorceries:


So, here's what I came up with:
Tight Sorcery Mythic Rare Cycle 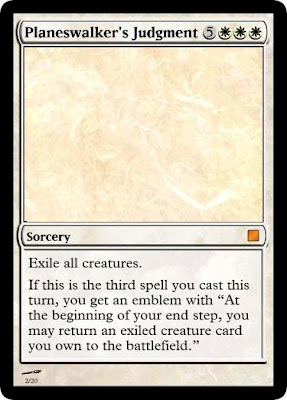 This card is Final Judgment at eight mana (as a trade-off for the extra ability). This spell's one of the more straight-forward ones.
As you'll see with the rest of the cycle, I ended up making the emblems do something once a turn for the rest of the game for you. However, I didn't want to do the upkeep because, by that time, after casting three spells, you won't be able to immediately reap the benefits of your hard work. Also, a few cards work better with "beginning of the end step" instead of "upkeep" triggers for their effects.
Finally, the "Judgment" part of the name is both a nod toward Final Judgment (and Day of Judgment, inadvertently) and an aspect of a person. "Judgment" feels like it deals with the white slice of the color pie. 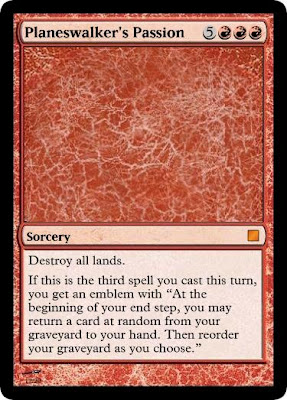 And here's the other straight-forward card. There's Decree of Annihilation's cycling, Bust of Boom/Bust, and removing a divinity counter from Myojin of Infinite Rage that all do the same effect. For the emblem effect, it was a little tricky to not make it feel green to get lands back from the graveyard (or to fetch for 'em), since I wanted the player to be able to recover if he or she worked for the emblem, but then I remembered Fossil Find. Hooray! Color pie intact. 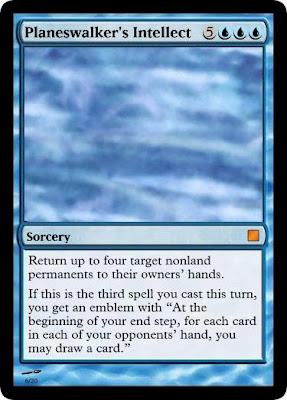 The spell effect compares with Distorting Wake. Of course, if there weren't an emblem clause, this card would be strictly worse, but because it's there, I felt that I had to make the card so that, even though Distorting Wake has an advantage of being variable, it has one less target than Distorting Wake when 5UUU is paid. Four's still a lot, though. 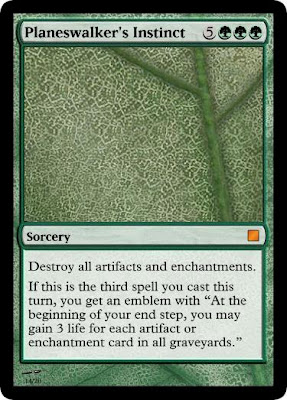 While this effect is mostly on white cards, it doesn't mean green can't have it as evident with Fracturing Gust. O.K., so this one might be underpowered compared to its brethren when casted without getting the emblem. However, once that emblem is obtained, the potential is great. Depending on the deck(s), this could either suck or be totally "bah-roken". I feel like it'll tilt more toward the former, but it depends on the environment. Your friends' artifact deck won't like this. Decks built around cards from the Mirrodin and Scars of Mirrodin blocks (maybe not poison) would probably not like this either. As for everything else, I'm just not sure. Poor Green. It's still not easy being you. 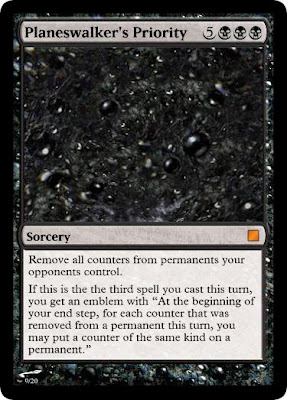 This is the one I'm most excited and nervous about. This just might be purely broken. I know, I know, I should do playtesting of these cards. But, my whole Magic collection is in storage! So, what am I gonna do? Make a 60-card deck of index cards? Or... use certain programs that let you play Magic online without it being Magic Online? Craziness! (*cough*)
Anyway, with the cards in this cycle, white got rid of creatures. Red destroyed lands. And green dealt with artifacts and enchantments. That leaves one permanent type not affected: planeswalkers. I didn't want to create a card that specifically said it destroyed planeswalkers since it didn't feel right. Planeswalkers are powerful wizards, man! However, black has a couple cards in the form of Aether Snap and Vampire Hexmage that indirectly deal with planeswalkers. So, sweet. The fifth permanent type is not safe.
I have no qualms with killing planeswalkers as I hate seeing how most of these cards are all upside, even in terms of their mana cost. This leads to prices soaring and many decks just needing to include them because they're so good, and they're mythic rare, to boot. Ugh. Don't get me wrong. I love the fact that there are planeswalker cards. Just how it all turned out has gone amiss in some way. ...I'm going on a tangent. Let's get back to the card.
So, dealing only with planeswalkers, what we have happening here is sapping every planeswalker opposing you and yours being fueled, if you have at least one, and if you got the emblem. Parasitism is black, indeed. For those of you that think the emblem might only be useful for that one single turn, don't forget that using any "minus" abilities on your planeswalker during your turn means you get to put them back on your planeswalker at end of turn. You could even put them on another planeswalker!
Yes, I am aware that if you end up doing the work to achieve this emblem and getting Sorin to 8 (He's gotta stay alive.), you pretty much win the game. But, that's a bunch of work needed to accomplish this. And you should win, then. Just like with any infinite combos involving Mindslaver.
And, yes, other ultimates will end up going off easily, too. If you get the emblem. And if you control a planeswalker with your opponent controlling one, too, with a decent amount of loyalty counters. Or if you control two planeswalkers. Good luck with that, sir or ma'am.
...Let's not forget those +1/+1, -1/-1, charge, and other types of counters you could redistribute! Wee.
Whew. Second challenge done. Eight days or so left until the Great Designer Search 2 begins. I've got my work cut out for me if I want to accomplish doing all the challenges of the Great Designer Search 1 before the sequel begins. So... HERE I GO!
Cheers,
Brad
at 5:29 PM