Gatherer randomly gave me Taiga! Of course, this is just one card of the whole ten-card dual land cycle in Alpha. They're all identical except for colors of mana, so that's what this redesign will be of. 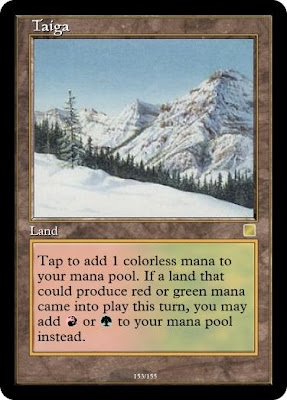 Each land has to have a restriction, so here's this redesign's version. The upside of this restriction is that it can always be used right away. The downside is that it requires constant maintenance with playing of the appropriate lands.

The interesting thing, though, is that this restriction rewards you for doing what you already want to do. In the beginning of the game, you need all the different colors of mana that you can get. What also happens at the beginning of the game, if you deck is of usual caliber, is that you play lands. Your red/green deck is probably going to keep playing Mountains, Forests, and other Taigas until you at least have three or four lands out. Around that time is when you stop playing lands every turn - but that's O.K. You don't need to play more lands. You're fine with just one colorless mana by then.

What's also cool is that, unless you're playing five-color-producing lands every turn, this land would only reliably produce colored mana if you restrict yourself from playing a ton of colors - it regulates your multicolored greediness.
at 6:43 AM