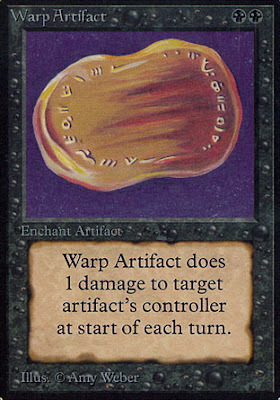 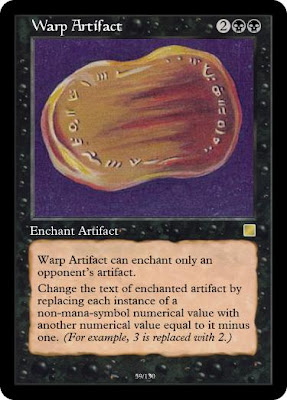 The stretchy-ness of the artifact within the art made me think of increasing numerical values by one. But then I looked through Alpha's artifacts and discovered there's not a lot that would actually hurt the opponent by increasing the numerical value in an artifact's text by one. So, I decided to do decrease. Perhaps the artifact is being "spread thin?"

I didn't want to settle for allowing you to be able to increase your own artifact's abilities positively. Because then it wouldn't feel like the black flavor that this is. This is a curse set upon an artifact, so it's gotta remain that way. To be sure, I added the first clause. No potential cheating for yourself.

I realize this is a little bit eccentric of a design, but it's a rare card, so there's some "O.K.-ness" there. This perhaps would be more at home as a blue card and without that opponent restriction and with an increase in numerical value rather than decrease. Alas, I am stuck with doing a black card as per the rules I've set for myself.