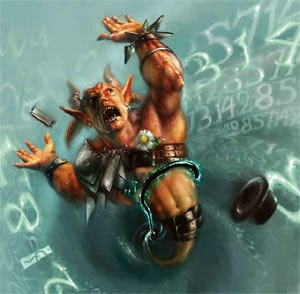 Last time, I filled in the creature slots of the commons design skeleton with creature keyword abilities. Today, I start to fill in the basic effects that appear for each color at common as well as add in non-keyword creature abilities that usually show up at common. For example, "Whenever CARDNAME deals combat damage to a player, DO SOMETHING."


I first started out with gathering data on what kind of effects usually appear at common in a core set. I only gathered data on white, blue, and black so far - so I'll have to finish red and green for next week's article. After gathering the numbers for each type of effect from cards found in each of the sets from Magic 2010 to Magic 2015, I then filled in my own numbers for each of those effects. In general, the numbers I put in are an average of the numbers written down for any one particular effect. There are some cases where, because undying exists, certain type of effects either don't get any number representation or is minimized.

Here's what the numbers look like for the first three colors:

For white, since white sometimes cares about creatures having too large power or toughness, I relished the chance to put in a card that cared about that due to the larger creatures that have undying. To boot, having it be an exile spell would be extra good since, again, undying would trigger otherwise. In fact... 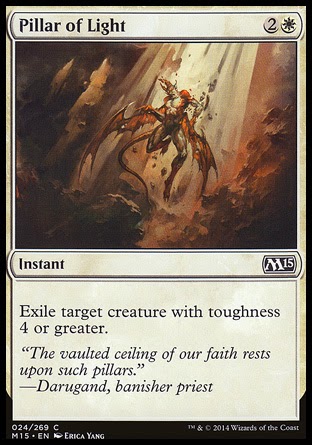 For blue, I valued having bounce for the interesting interactions that would have with creatures with undying.

And the tables above informed how I arranged my effects into my design skeleton's card slots. The tight squeeze is a real thing that happens, despite the large set size! Here's what I ended up with:

Because this is a set that is making important use of +1/+1 counters, I hearken back to when there was heavy counter use and see what blue could do. I relished the chance to do a monoblue version of these cards: 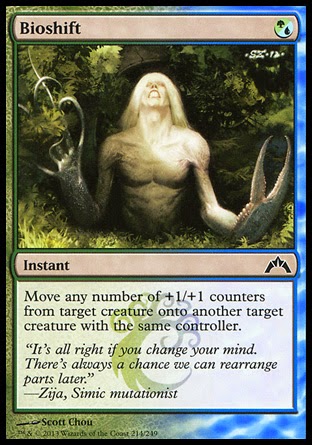 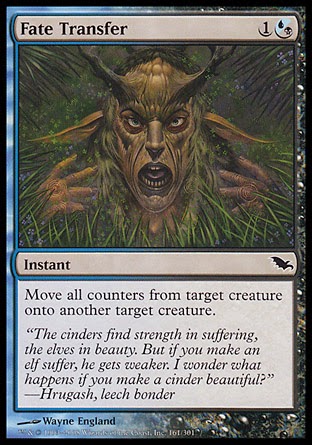 Since this is a core set, I can't include either of these two cards, despite their being common, because they're hybrid. Great! I get to add another version to this library of counter-moving cards.

Now, again, because this is a core set, I can't make the spell too complicated. I was tempted to have a card that said "Move a counter from target permanent to another target permanent that shares a card type." Permanents sharing card types? Oi. Too clunky for a common core set card. I did want to still tickle the potential for creative counter moving and not explicitly call out +1/+1 counters, though. For decks of older, Constructed formats that might want to make some cool use of moving charge counters around or something.

So, while I'll miss the chance to move around counters among planeswalkers (that'll be for another time), I'm satisfied with keeping the spell simple and restricted to creatures but keep it flexible in both who you can target and what kind of counters you can move. Like this: 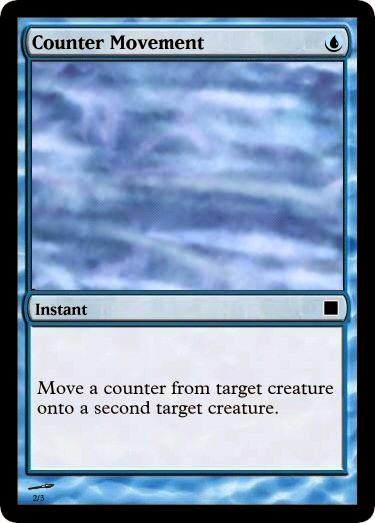 What's interesting is that the wording I used here is not templated slightly incorrectly from the above cards of Bioshift and Fate Transfer. There was a new card from Fate Reforged, Daghatar the Adamant, that changed up how the wording goes for moving counters, so I decided to follow that template. Here's the card: 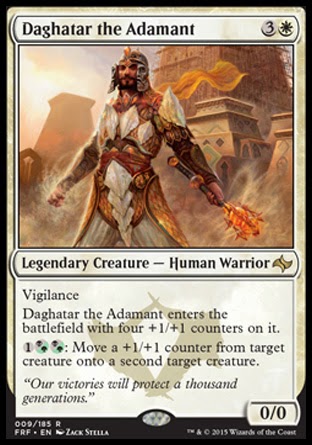 We're now entering into territory of much potential changes to the design skeleton with all the cramming we're doing and moving of effects and numbers around. While painting by the numbers is one method of filling in the design skeleton, I musn't forget other attributes of a set or core set that should be present. It's easy to have tunnel vision and do cold design like what I've been doing up until now. But if I continue to do so, I'll miss some important ingredients that make up the big picture.

This subject reminds me of the Book of Lenses, a game design book that helps you to examine your game designs from various, different lenses/perspectives. Up until this point, I've been designing with just one or two closely-related Magic Design Lenses. What I need to make sure of is that I account for each of the different lenses when I let myself have the time to get to them.

For example, what of the creature types for each color that should show up? If a lifegain effect on a card is a staple for white commons, perhaps the same can also be said for "red always has a Dragon creature at rare."

And what of the number of horizontal cycles? These lenses will be explored in a future post, whether that's next week after red and green have their effects filled in, or in two weeks after that. Until then, see you on the #mtgdesign Twitter-spheres (@bradleyrose)!
at 12:54 AM