Yes, I've recreated the uncommon cycle for the second time because I was bothered enough by the criticism of the version 2.0 cards. Instead of being "too bad", they're too powerful. I knew their power was beefed, but things such as mono-red taking advantage of just the red enchantment hitting for 3 every turn with mountains, it didn't make me feel good. That's too powerful. And the same sense of power goes with the other enchantments. I'd say the black one is the weakest.

So, I lowered the power/toughness boosting, (I even took it away completely from blue.) I added a cost to the upkeep activations, and I increased the regeneration cost for the green enchantment. It didn't take me long to make these adjustments It's easier to change the cards since the design part is now locked in, and it's just the development part of adjusting the values to make them more balanced.

I would tell you that this is the last time I'll change these uncommons, but given how I said that same thing for my second versions, I'm going to not say anything. Just in case.

Don't worry. I'm not pushover when it comes to my own designed cards. I just have listened to criticism and taken it into consideration and determined that it had merit. So, this is my response: 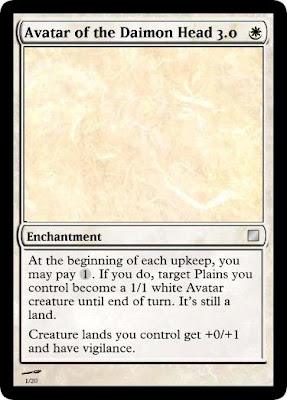 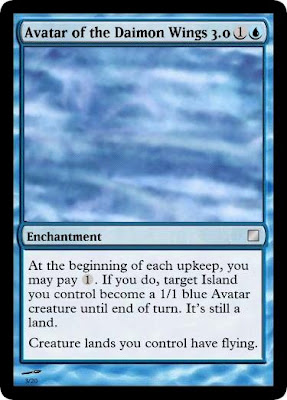 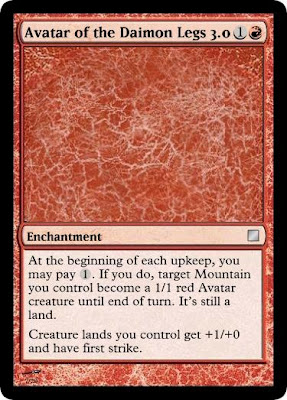 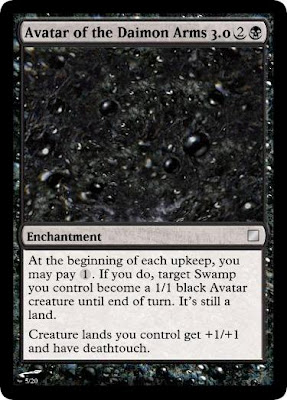 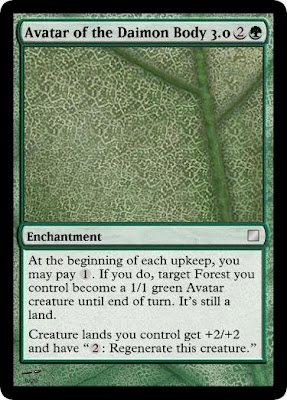 So, for mono-red, now if they pay the the upkeep cost, they'll be spending a 'R' mana, and sending in a Mountain card. That's sort of like a Shock, right? And Shocks aren't like Lightning Bolts when it comes to racing the opponent to deal 20 points of damage before running out of gas or the opponent stabilizing. Opposing creatures with three toughness suddenly give 2/1 Mountains a run for their money. Now, you gotta have an external source (most likely a card) to help solve the problem of that blocker.

Hopefully, I've found the middle ground here, and it's not too powerful nor too bad (It's definitely not something to laugh at anymore. If anything, it might still be too powerful.).

My rare cycle will be posted either today (double post!) or tomorrow.