Here's my rare cycle submission in response to this challenge from the last Great Designer Search. I looked over carefully the requirements of the test to make sure whether or not they specified that the cards had to be monocolored. I didn't see any such rule, thus, I went ahead with my idea for four-color cards, each card in the cycle having a missing color.

But, these aren't like the Nephilim cycle. I used hybrid mana symbols to allow for greater flexibility in what colors to use for the spells. (For example, a (W/U)(B/R) cost can be paid with WB, WR, or UR) Also, I decided to make them X spells. And, they had to be instants because of my simulation of the challenge.
One challenge of having these restraints is to have card effects that, no matter what colors were used, still matched up to what those colors can do according to the color pie. The first decision I made was pairing ally colors in the hybrid mana symbols. Then, for each hybrid mana symbol, I needed to know what both colors had in common so that no matter what color was chosen, it'll still be O.K. For example, white and blue both share the flicker effect (though, in this list, it's all white cards) as seen in the cards Turn to Mist and Mistmeadow Witch. I did use the flicker effect on one of the cards in the cycle, in fact. So, I turned to Gatherer to find all the hybrid cards for each ally-color pairing to find out what each color did to get a list of effects I could do for each color pair.
Another challenge was to have effects that accommodated the scalability of the X-ness of these spells. But let's see the cards already:
Rare Instant Tight Cycle
(Note: I decided that having the same mana cost and the same X component with four-color hybrid shenanigans meant this could count as a tight cycle.) 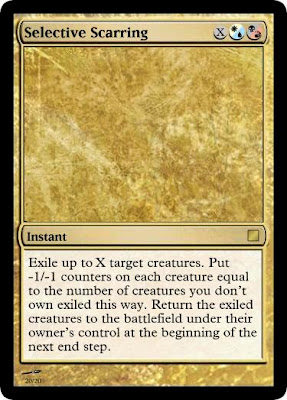 I believe this is the weakest card of the cycle, but I could be wrong. This is the card I used the flicker effect on.. For the black/red part, in case you didn't get the throwback from the title, I chose the common effect seen in the card Scar. There's synergy here in that you could save your own creatures from the -1/-1 counters being placed on them.
However, there's two variables here (at least): how many creatures of your own can you save and how many -1/-1 counters can be placed on each creature. I solved this, which happens to also temper the possibility of this being too powerful, by requiring you to flicker your opponents' creatures as a meter for how many counters to place. (Those -1/-1 counters are permanent, after all.) 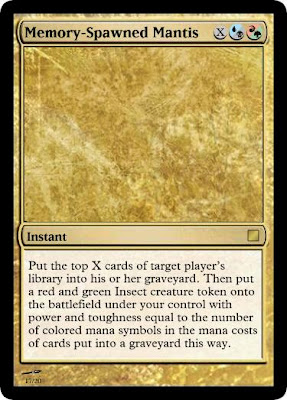 Both blue and black do milling, and I copied Giantbating's placement of red and green creature tokens (except those were temporary, and I made my token permanent). However, I didn't want a Giant creature token, so among the sea of many red/green hybrid cards that had Goblins and Giants, I found Giant Solifuge, an Insect. Perfect!
Again, there's two variables: The amount of milling and how big the creature could be. I didn't want to be boring and tie the X value to each effect (only two cards in this cycle do this), so, as you can see, the milled cards' mana symbols were incorporated. Besides, I need the two different mechanics to work together to form a whole greater than the sum of its parts (which was one of the criteria that they were judging on for this challenge). In this case, the reason for the milling mechanic is that it's an insect manifested from the memories of a planeswalker.
So, how big does the insect normally get? Well, I only did a rough estimation, so I figured that about two-thirds of the cards revealed will be nonlands. And, of those cards, you'll get around three mana symbols on average. So, on average, if you paid 5 total mana, you'll get a 3/3. But, I could be way off. 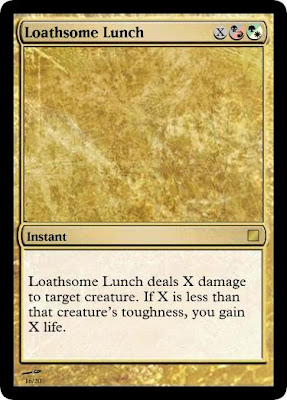 Yes, the flavor is you eating the creature. But, it's for nourishment! This one's the most "boring" card as dealing damage and gaining life is quite obvious for their black/red and green/white color pairs. But, they're perfect to go together since the effects mirror each other.
There are existing cards like Death Grasp, Drain Life, and Heat Ray that are similar to this card. Let's compare with Death Grasp.
It costs the same amount of mana, but you straight up gain the life. What's with that? Well, that's because it's a sorcery. This one's an instant, so something's gotta give. So, in exchange for being an instant, Loathsome Lunch can only target creatures. And in exchange for being flexible in the colors that could be spent on this spell, it has a condition for whether you can gain that life.
Heat Ray is an easy comparison in that it also does X damage to creatures, it's an instant, and you also pay a red to do it. So, obviously, paying an extra mana means you get the benefit of another effect. Hooray, it's still balanced. And then there's Drain Life, but I think you get it by now. 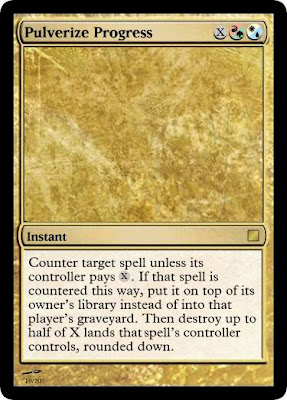 This card counters the way it does because white and blue both have counterspells that do the "lapse effect". The other ability, destroying lands, stumps the opponent's mana base.
So, what happens here is a three-way wonderfulness of blocking the opponent from progressing. There's stopping the spell temporarily, there's replacing their next draw with that same card, and then there's the possibility that they won't be able to cast that spell again because of the lost lands. Hooray!
But, destroying lands is serious business. That's why it's half of X, rounded down. So, to destroy two lands, you'll have to pay six mana. That's like Rain of Salt. Except, you know, this spell is better. But, in my defense, Lavaball Trap costs 8 for an instant, but it also does 4 damage to each creature. Last I checked, that's more than the two extra mana spent to get this additional effect. Which narrows down the land destruction being pretty much O.K. I know the fact that you could scale the spell with X means the card should have a bit less power, but it's fine. I'm just "pushing the power level" in this case, if anything. 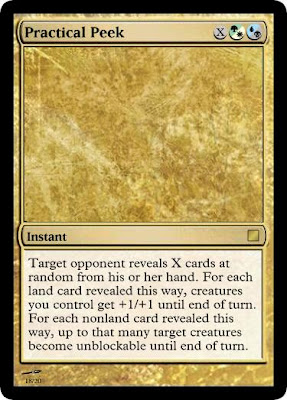 This one's "interesting decision" comes with when to cast this card. You could cast it during your turn to gain unblockable beefed creatures (possibly), or you could cast it during your opponent's turn as a combat trick and get some card advantage (possibly).
I included the "at random" clause because I didn't want the opponent to choose what benefits you get. They'll always choose the worst one for you. Luckily, revealing cards at random seems to be perfectly O.K., anyway.
So, that's all the cards. On a side note, I think of my card names like fancy playtest names. They're not something like "Insect Mill" or "Counterspell Land Destruction", but neither do they seem to be finalized card names. That's O.K. They're not important, but I still try hard, for some reason. Somebody slap me or something.
Two cycles left: common and mythic.
Cheers,
Brad
at 10:46 PM