I've decided to, instead of flooding one post with all the five-card cycles I do as per this challenge from the last Great Designer Search, I would give each cycle its own post. Of course, since they're cycles, it'd be easier to process in your head, so they'd seem much more like mini-posts. And rightly so. But, let's get on with it already.
Uncommon Enchantments - Loose Cycle 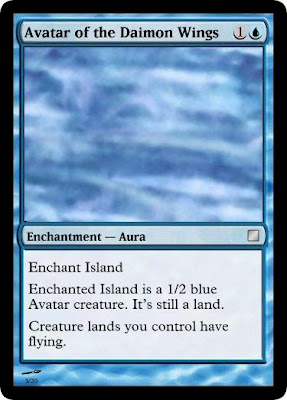 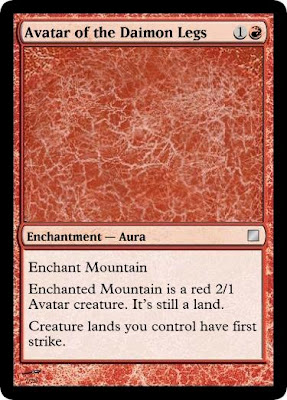 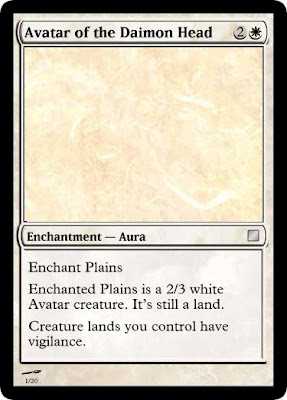 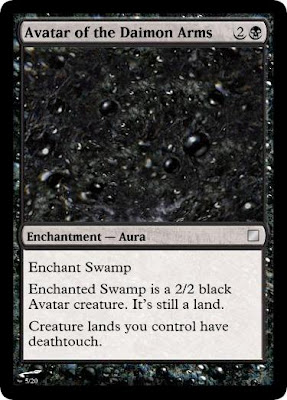 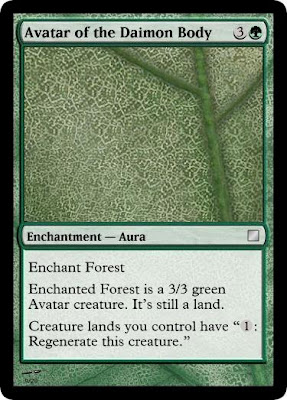 First off, flavor. I was trying to make this cycle feel like it's NOT the Genju cycle. I settled on a daimon whose body parts were spread out in shrines across the lands of this plane (and don't point out that the ghost of a deceased hero can mean Spirit man lands which would be similar to the Genjus in that they are also Spirits). Anyway, that would also explain why animating a land would make something so small. Avatars of the body parts of a daimon. O.K, we're good? I hope so.
Next, mechanically, this is a cycle whose cards can work with each other. Each ability that was chosen (except for flying) was made to work in synergy when combined. Well, besides flying being just good for creatures period; vigilance allows the lands to attack while still having the ability to be used for mana. And that mana can be spent on regeneration of these lands, to boot. And first strike and deathtouch combined allows the small bodies of these lands to not be a concern at all. I chose the mana costs for each aura and their respective abilities to align so that the two synergy pairs (regeneration and vigilance) (first strike and deathtouch) would not fall under the same slot in the mana curve.
If a player builds a deck around these auras and gets all of them out, you have a deadly man land attack force. Of course, this is not a competitive strategy, as relying on an aura in the first place is a risk, but there would be some casual players who would like to use these. Also, I had to make sure each card didn't have more than one colored mana symbol in its mana cost, so it'd be easier to build a deck with all five auras in it. In Limited, the "Enchant <basic land>" is relevant and encourages engagement in combat, which is a healthy thing for Limited games.
Next cycle will be the rares. (I didn't forget the common cycle. I'll get to those.) So, what do you think, reader?
Cheers,
Brad
at 10:23 PM