I've completed Test #3 of the initial wave of weeding out applicants for the last Great Designer's Challenge. The rules were first mentioned here in the article "Tests of Endurance". And then the judges shared their thoughts on each of the finalists' submissions in Episode 1 - "In the Beginning".

Let's get to the good stuff first before I scare some of you away with some self-reflection writing. That part will be after the card designs.

What I've done was create eight cards instead of six. I initially created six, but then I realized that the "mythic rare" rarity has been introduced since the last Great Designer Search. Since the test asked for two of each rarity, I decided to first do the six cards following the rules exactly (no mythic rares), then do an extra two cards that were mythic rare just to practice my mythic rare designing skills. So, here they are: 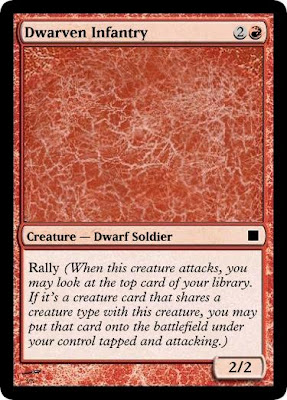 I knew I wanted to show my ability to create a new keyword mechanic. I was exploring areas of design that dealt with combat, such as in blocking, attacking, dealing combat damage, etc. Fun fact: This card was changed from a white Human to a red Dwarf because of the synergy Rally would have with Dwarven Recruiter. 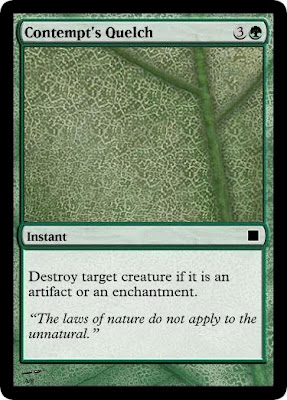 I wanted to make sure my other common design could show that I was able to design simple and elegant cards, too. I decided to involve the implication that there would be an abundance of enchantment creatures to make this card feel like it's from another block. However, enchantment creatures are not a new concept, as seen with the Future Sight card Lucent Liminid  and one of Alexis Janson's submissions for this test. 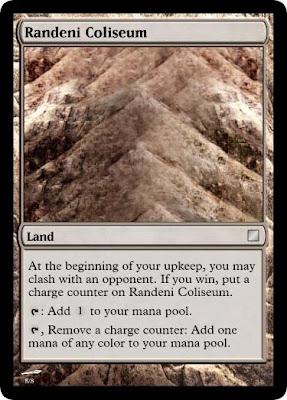 For my land card design, I liked the fact that were lands that had keyword abilities on them that normally appeared on spells. Like Tolaria West and Drifting Meadow. Also, I wanted to do something new with an existing keyword. So, I went through the Wikipedia for a list of existing keywords and noted which ones could appear on a land (or could be done with a twist, like multikicker did with kicker), and I decided between clash and champion. The champion keyword could technically work, but I think the flavor conflict would be bad (How does one champion a land?). So, I went with clash, to be safe. 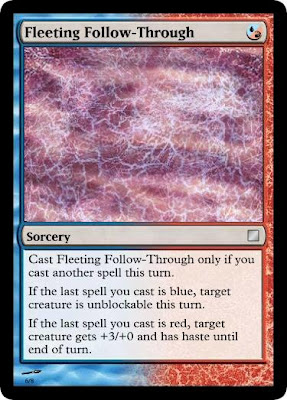 First of all, I admit that I chose the combination of red and blue because it's simply my favorite color combination. Now, this was my card that would be good for limited. A "swingy uncommon". The card rewards you for playing red-blue spells, except in a new way that wasn't already done before. 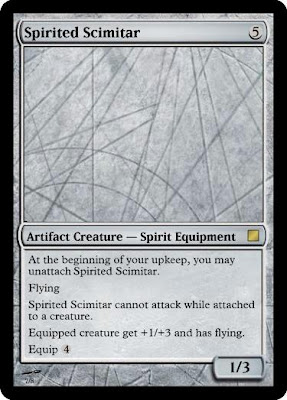 The first card I designed. The easiest way to create something new was to try new combinations of card types (Heh, sorcery lands, anyone?). I settled on artifact creature, which is not new, but an equipment that is also a creature is new. Now, one problem was that players might get confused about whether an equipment attached to a creature could attack. (Yes, they can. At least, I believe so.) Similar to the Dryad Arbor problem of wondering whether it could tap for mana right away (they explained it in reminder text). I decided to just have it not be able to attack, as it also helps the flavor ("You can have me fight, lad, or you can use my abilities for your own!"). Also, this card is a throwback to Dancing Scimitar. 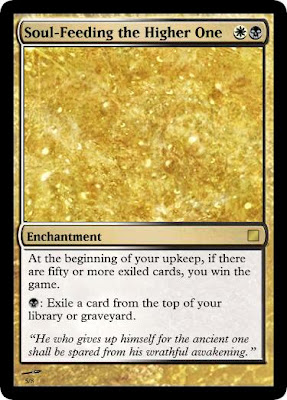 Going over my other submissions, I realized that there weren't any dedicated Johnny cards. If you don't know who Timmy, Johnny, and Spike are, I suggest you take the two-question quiz and read the subsequent article to found out: "Timmy, Johnny, and Spike Revisited". Anyway, so I love alternate win conditions, and that's in the Johnny department. One of the colors I chose was white, since white seems to do this often. It must be because white is the color of setting rules. I chose "exile" as a theme since white and black both do that sort of thing. I originally was thinking of twenty for winning the game, but then a single Haunting Echoes would've made achieving this goal too easy. I upped the amount to fifty, so the player would need to at least put in some effort. Using Two Echoes (against your opponent and yourself) would be a good enough effort.
I realize that my original six may be weak in the departments of making cards specifically to please Spike or Timmy. I'll accept that as I feel I these cards have strengths in many different areas. So, the two bonus mythic cards are as follows: 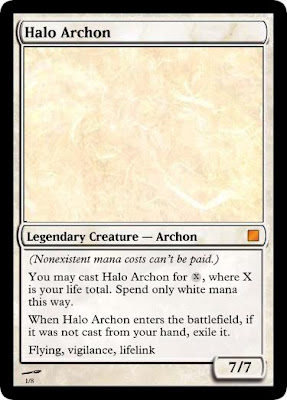 Now, this one's a Timmy-pleaser. I followed the current wording for Evermind for the "no mana cost" reminder text. I made sure my wording for an alternate casting cost was correct by following the examples of Flashback and Evoke. I wanted to do an epic white creature, but I didn't want it to be a typical Angel. It turns out that there are some Archons in Magic, which I loved. It looked like that the Archons have a common theme of justice, or something similar (vengeance, redemption). So, my take is giving the weakened white mage a chance to do the "eye for an eye" thing through the inverse casting cost and life total. I decided turn five would be the "do or die" turn. I figured a 7/7 with sweet abilities would be good enough for five white mana on turn five and at five life. I hope I'm not grossly mistaken. I didn't run this card through playtests to determine the correct power/toughness. 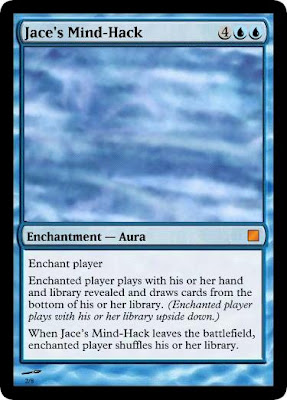 This last card is actually a card with a concept I re-used. I thought of it when trying to figure out what a mythic rare iconic creature with psychic abilities (Alakazam) would do. I then transferred the ability onto an Aura card similar to what you see here for the Bragster.com/Wizards of the Coast contest (Bragster.com is no longer functioning as was before). (Also, each participant was able to submit multiple cards, which is why, as you can see from a previous blog post of mine, my winning card is different. And that brings us to today's version. I feel like this concept of revealing everything was executed well, and I'm going to be such a cheerleader for it.
Well, that's it. I was actually about to write this post last night, but with a very different tone. I was feeling all sorts of negative feelings that were working against me and my hopes of winning this Great Designer. I felt inferior to possible other participants (both by last year's finalists and by this year's possible contenders), and I doubted my design abilities as I spent hours not making progress when trying to design cards. But, as Yoda says, "Do or do not. There is no try."

But, those feelings were quelled when I found out that my friends actually had read and comented on my posts. Like, three of them! Josh, Adam, and Devin, thanks, guys. I started feeling positive rays of encouragement. Like, people are reading my blog and discussing it.

Wow. Yeah, it's my friends, but aren't they important peeps to count for as well? So, I started feeling like I can kick ass in this competition, no matter how much I feel impressed by the other guys I would be competing with.

Also, it helps that I was reading this blog post by MTG Color Pie about the middle children of Magic. I connected, man.

So, that's it for now. Next up is the design of three five-card cycles as described here: "Episode 2 - Gimme Five".