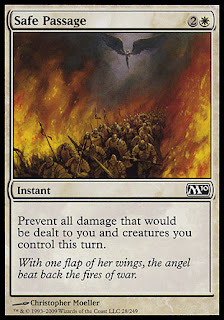 This whole scenario of killing a card late in development started as an idea of doing something different from the other Magic: The Gathering design enthusiasts. I didn't even have a name for it in the beginning and experimented with different names before settling on something succinctly descriptive yet ambiguous. Yes, it's "Daily." Yes, it's a "Card." But what does it mean to be a "Redesign?"

I ask this because Chardish was confused about what the heck is going on with this fake scenario. In real life, cards get killed late in development for what I imagine to be one or more of a variety of reasons. On this blog, a random card gets killed, but there isn't a reason why.

So, I just made up a rule that I simply had to redesign a card that was different from the abilities/effects on the original card and was also different from anything that currently exists now for interest's sake and non-bias-ness (It's easy to say, "Well, Totally Lost didn't exist at the time, and that card would have been great to put as a replacement to the killed card. There, job done."

From my experience thus far, there's a couple quirks:
The upside of designing a card that must match the rules I lay out for myself (restrictive naming, same art, same rarity, same color) is that, as Mark Rosewater's mantra goes, restrictions breed creativity. I don't have to keep coming up with some kind of idea or thought every day and design from there. And the Random Card button in Gatherer seeks out my next topic for me.

Perhaps what I need to do is take what's good about this exercise and cull out the bad parts to make something entirely new. While forcing myself to design under the "card killed late in development needs replacing" scenario is a novel idea, it may not be the best as it is now.

For example, one way of changing the premise of this daily card design thing is to get my random topic in a different way. Instead of a Random Card to redesign, I get a random word or phrase that I must design around. Perhaps I get a random picture from the internet. Perhaps I get two random cards and I must design something new that evokes both cards. Stuff like that.

What do you think of this daily Magic: The Gathering design exercise? Do you guys read, skim, or skip my writing? What do you want to see more of, and what do you dislike? Got any ideas? Let me know! 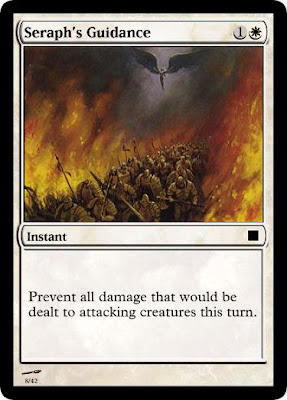