Fill in for the Killin': Sparring Collar

"Fill in for the Killin'" is what I decided to name this card-design-of-the-day series for today. I'm not satisfied with it, really, but I'll keep experimenting with what I call this thing as the days go by until I'm satisfied. 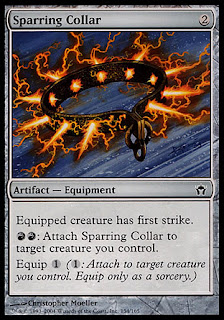 This card is part of a cycle, so let's examine what parts of the card need to remain. Each card in the cycle has a mana cost of 2, an equip cost of 1, and a double-colored-mana-costed ability that attaches the equipment to a creature you control. In this case, it would have to be two red mana. This means we need to have the abilities that this equipment grants to the equipped creature to be something you would find on red cards, normally.

Attaching an equipment to a creature at instant speed means that whatever abilities that the equipped gets shouldn't be something that is useless or detracts from the point of attaching at instant speed. You wouldn't want negative tension in the choices you give to the player.

For example, I shouldn't just have this equipment grant haste because you would normally only care about that before you declare attackers. In this case, you might as well just use the normal equip cost. It's gotta be something that you would want to respond to blockers declared, abilities activated, or spells cast.

The first thing I did was take a look at other keyword abilities that red has that isn't first strike. They are: double strike, trample, intimidate, mountainwalk, and haste. Double strike is right out the window since it shouldn't be at common, at least not on a card with the parameters it already has locked in as part of the cycle. Trample has already been given to the "green" equipment of this cycle. Intimidate can't work because once opponents declare blockers, that's when you'd want to switch the equipment - but by then it's too late for intimidate to matter. Mountainwalk has the same problem that intimidate has. Haste can't work by itself since giving a creature haste at instant speed doesn't do anything. It would be O.K. if there were other effects that mattered accompanying it, though - like +1/+0.

There are other abilities/effects that are red that aren't keyworded that we could consider: firebreathing, attack each turn if able + upside, unblockability, pinging, looting, copying spells, land destruction, artifact destruction, gaining control of creatures temporarily, boosting a creature's power (and rarely toughness), and direct damage. I probably missed a few things, though. Anyway:

Firebreathing ("R: This creature gets +1/+0 until end of turn.") has synergy with instant speed re-attachment in that you can ensure one of your unblocked creatures will benefit from the power pumping. You can even make sure to put it onto the desirable creature as need be when you are blocking your opponent's creatures.

Attacking each turn if able is just a detriment that would offset some kind of strong, beneficial effect. Also, don't forget that it could aid in defining the flavor. For example, if I use this effect, I can say that this collar on a creature kinda makes the creature into like a Mad Dog that can't be stopped from being aggressive. 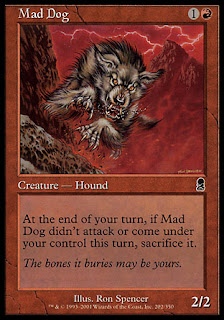 Unblockability has the same problem as intimidate and mountainwalk.

Pinging (T: This creature deals 1 damage to target creature or player.) could benefit from the instant-speed movement when you use it during your opponent's end of turn step, but granting repeatable damage is something that should be used at uncommon rather than common for Limited. Because of this and the fact we need to design something "safe," pinging is not in the picture.

Interestingly, in the world of Mirrodin, where this equipment is from, there are a type of goblin - "spikeshot." Spikeshot Goblin appeared in the original Mirrodin block, and Scars of Mirrodin followed up with a Spikeshot Elder. The word "Spikeshot" falls between Solarion and Spinal Parasite, where it needs to be to have the same collector number.

I bring up "Spikeshot" because it's like pinging but deals damage based on the creature's power. Granting the spikeshot power on a card like this would in no way be appropriate at common - it's too powerful! However, what if we flavor it as an equipment that spikeshots would want to use? As in, the card boosts power?

And this is also where we run into a problem - granting +1/+0 at common is fine. Granting +2/+0? Now that's serious business - perhaps offensive. When equipment was first introduced into Magic: The Gathering, Bonesplitter Axe was designed at common. It was found that being able to give a whole two points of power to a creature at common was quite powerful for Limited. It should be uncommon or greater. So, this is something I definitely don't want to do as a "safe" design.

So, should we grant just +1/+0? Unfortunately, that's both too lame and has already been beaten out by the "green" equipment of the cycle granting +1/+1.

All righty, let's move on - perhaps the spikeshots shan't have a Spikeshot's Choker after all. Sad times! It would have been so clever and awesome to have a name that both fits into the card slot alphabetically AND be something that is relative to Mirrodin. 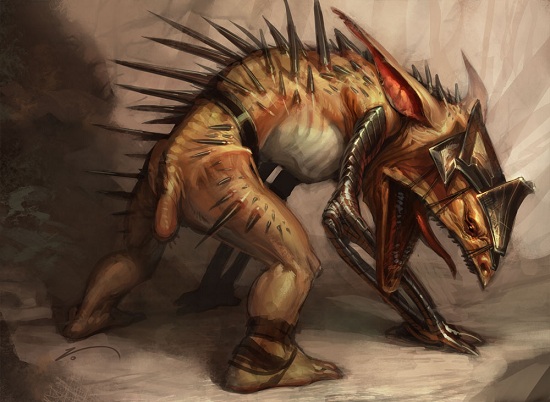 If I pull of artifact destruction, it seems like it would end up being too non-elegant and/or complex on this card, especially when there's already an extra ability on the equipment for attaching it to another creature at instant speed.

Perhaps we can harness direct damage, though. After all, those are some nasty-looking spikes on that collar. Direct damage to both creatures and players is not awesome in this case. It's the same problem that pinging has - it would be bad for the Limited environment. But if we limit it to creatures... Got an idea!

Granting +2/+0 to a creature is too powerful. You saw what happened with Cranial Plating, another card within the same cycle! You can stomp on creatures and deal more damage to players. Granting +1/+0 is too weak to give to a creature. But what if your creature dealing more damage was only to blocking creatures? This would make the two extra damage dealt to creatures not as bad as when you give a creature straight-up +2/+0!

How's this? "Whenever this creature would deal combat damage to creatures blocking it, it deals that much damage plus 2." It's a weaker version of deathtouch, right? It does normal damage to a player but is more threatening to a creature. However, granting deathtouch to a creature - is that common? A search brings up Gorgon Flail as granting both +1/+1 and deathtouch at uncommon. Tall order for putting this at common. And it can move around at instant speed.

But it's also creature evasion in a way that first strike is. You don't want to block a creature with first strike so you let it through and get damaged by the creature as if it were unblockable or had flying anyway. But first strike actually needs the power of the creature to be higher for it to be more effective. You need to work for its awesomeness. A 1/1 threatening first strike isn't quite as scary. 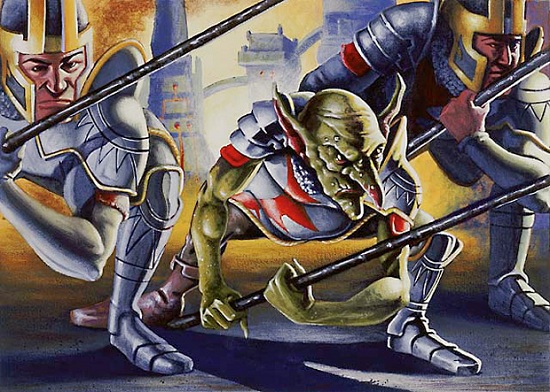 This ability I'm proposing doesn't need any more work in order for its benefits to be more useful. It's just straight-up making a creature more lethal. Perhaps this isn't safe to do so - and the wording is weird, too. Poor common.

Well, then crap. What else we got? Well, there's looting (T: Discard a card, then draw a card.), and it would benefit you in the same way that pinging would, but it's not as exciting. Also, how does it make sense with a spiky collar?

O.K, well, there's the haste option. Give the creature +1/+0 and haste. That would make the movement relevant because of the power boost, and it's better than the sucky single-power boost by itself. Sure, that seems safe!

I guess we'll have to settle for a spiked something of some kind. Or a Spiked Choker. Does that reflect the haste part accurately? Maybe the spikes emanating lightning/electrical-ness in the art would represent the haste part just fine.

Looking through words that squeeze into the proper placement alphabetically and also accurately represents the abilities is tough! Oh, I know! Let's look up words that are on haste-granting and/or haste cards and perhaps we can do something with that. (One moment.)

All right, fine. I'm settling on Speedspike Collar (I'm avoiding using "collar" to be more "creative.") 'cause it's descriptive (maybe unelegantly so ...just look at Battleflight Eagle, though!) and perhaps Spiked Choker or Spiked Collar might be an actual card someday , and I don't want to waste this kind of name on an Equipment that will most unlikely be reprinted within a block again. O.K., I'm done!

Filling in for Sparring Collar is... Speedspike Collar! Hmm. Doesn't quite sound as strapping as Sparring Collar, does it? Ah, well. Battleflight Eagle, remember? 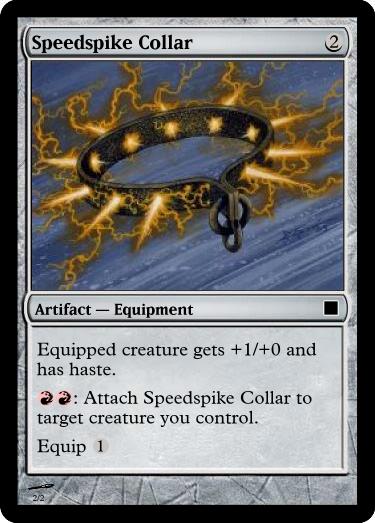