Hole in One: Bog-Strider Ash

"Hole in One" - another attempt at coming up with a name for this daily Magic: The Gathering card design series. I like it worse than my previous attempt! ...Well, the show must go on.

Today, the Random Card button of Gatherer has given me Bog-Strider Ash! 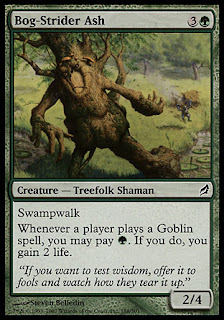 Scenario: this card from Lorwyn has been killed late in development, and we need a replacement design that uses the same art, is the same color, and has a name that falls between Battlewand Oak and Briarhorn alphabetically!

So, I'm not going to remove swampwalk. I could do a variation where swampwalk is granted as part of a triggered ability or something. But looking at the other cards in the set, the other landwalk abilities were given in the same fashion as with Bog-Strider Ash. So, I'm going to leave it as such.

The Goblin part, though, shows something that several cards in Lorwyn do. Bog-Strider Ash has a different creature type from itself matter. I looked for other cards where a creature type mentioned in the rules text is different from what is found in the type line, and the numbers for each creature type vary. "Goblin" appears on four such cards while "Faerie" only appears on two.

Because of the fact that Goblins already have so many different creatures caring about them, I won't feel beholden to caring about Goblins when I redesign Bog-Strider Ash. Also, it helps that, in the art for Bog-Strider Ash, you can barely make out a Goblin in the background. So, it doesn't need to be included. Just look at the art of Goldmeadow Stalwart or Kithkin Greatheart.

I checked the mana costs of other cards in the set. For every single converted mana cost for each color from one through five, there is at least one common card that does not require two colored mana in the mana cost. Incidentally, if I change Bog-Strider Ash's mana cost to anything other than 3G, then this fact becomes untrue. The two other four-costed cards both require two green mana! This just won't do. Thus, I will keep the mana cost of this card slot 3G.

Next, I checked out stats of swampwalkers at 3G. Seems like the standard is 3/3. So, it makes sense that this Treefolk is a 2/4 with that bonus not-too-powerful ability to make up for not being able to hit as hard as those other swampwalkers. So, I could change this guy to a 3/3 then call it a day. But it's already been done before - boring.

I then looked at the stats of other Treefolk creatures. Every single Treefolk that has a set power and toughness has a toughness of at least three. So, I can't do what Krosan Constrictor does and give it a neato ability and make it a 2/2. It would be out of flavor for a Treefolk! They're big, tough guys. This means my stats are limited to 3 or more toughness. Additionally, because this guy is a swampwalker, you wouldn't want 0 power.

Then again, how often are you going to get a chance to warrant a creature design that has a super high toughness with swampwalk? Treefolk is a perfect chance to do that, and it's not often you have a bunch of Treefolk around enabling you to do these treefolk-y designs.

You know what? Oaken Brawler costs the same amount of mana as Bog-Strider Ash, right down to the number of colored mana symbols. And it has the potential, with clash, to be a 3/5. That high toughness at turn four seems to indicate that a 1/5 won't be game-breaking.

However... the mountainwalker and forestwalker both have at least 2 power. I wonder if the Limited environment needs a swampwalker that can hit for at least 2. You know, for when you sideboard against black.

I wonder if referring to Goblins is needed for sideboard purposes as well. ...nah. Perhaps this card ids being killed because there is TOO MUCH Goblin hate. So, let's leave out the Goblin.

Now, I'll look at what abilities the common green creatures already have as well as what effects are already on green noncreature spells, so I can see what kind of ability I could potentially give to this card in addition to swampwalk.

The creature keywords that have not been used at common are: deathtouch, regeneration, flash, and hexproof. At the time, hexproof wasn't a thing, and since designers would have kept hexproof in mind and might have designed differently if it were, I won't consider hexproof. Fight wasn't a thing, yet, either. Deathtouch appeared on two noncreature spells in Lorwyn, so let's not do that to prevent oversaturation. I find it a hard sell to have a Treefolk that can surprise you and flash onto the battlefield, so flash is out. There's already a spell that does regeneration, and if you're landwalking, you won't get into fights as much, anyway.

...and I'm running out of time for today, so I'm going to settle on keeping the Goblin part except do an effect that doesn't exist among the commons in Lorwyn: drawing a card. The name of the card should make the flavorful connection between swampwalking and stealing from a goblin: raiding!

Also, thank goodness Goblins in Lorwyn are called boggarts - it made it so that it fit between Battlewand Oak and Briarhorn! 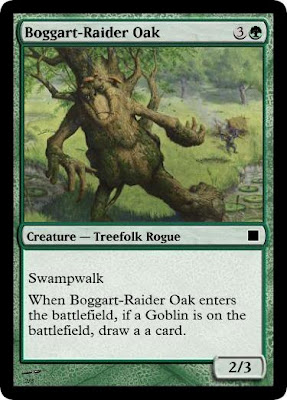