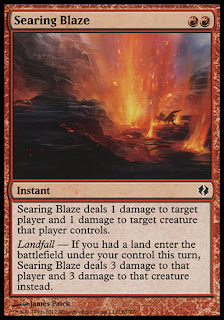 The only restrictions beside the usual "it's been killed late in development" restrictions is being an instant/sorcery with landfall.

But, really, you can't do land destruction like this without either making it broken or unelegant (tacking on an extra effect).

What else can spew red, fire-y stuff? ...Oh! Mana! Got it! Specifically, the "ritual" cards that give a temporary mana boost. Here's a few of 'em:

I've got a wedding to go to today, so I'll keep my "stream of consciousness" style of writing for these blog posts brief. Actually, this is perhaps for the best for future posts period. Bite-sized daily posts, go!

Since landfall is the condition that needs to be met in order for the player to get more mana, I don't want to design one that costs too low - because then the player wouldn't even be struggling to try to hit landfall. They're just playing their lands, anyway. I'm figuring that turns 1 through 3 are all when lands will be played. The fourth land and beyond is where I believe the player will experience that moment where they may or may not hit their land drop to trigger landfall.

Since players want mana no matter what, you need to cost the card higher to control the bonus. Groundswell isn't correct to play on turn 1, most of the time. As such, it has no problem being costed at 1. These ritual cards definitely are fantastic at any time you play them except until you already have enough mana.

Mysteries of the Deep is a perfect example of what I mean - players always want cards, so they're going to be always playing this spell as early as they can. So you gotta push up the cost to make landfall meaningful and/or keep that bonus in check. 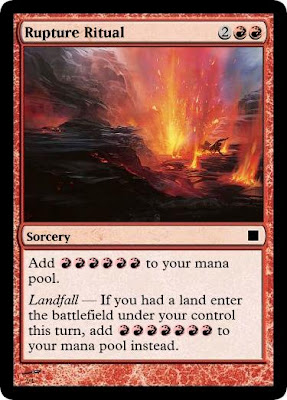 To be "safe," I made sure it was at sorcery speed. Note that these ritual cards tend to produce mana that's less than double the cost of the spell. So, this one costs four, so producing eight would be worrisome. And I was still able to have wiggle room for different amounts of mana output to accommodate landfall and still make this card "worth it" without the landfall.

And the name fits alphabetically to accommodate collector number! All right, peace!
at 9:05 AM