This weekend's Weekend Art Challenge on Goblin Artisans uses the above illustration. The challenge asks you to imagine Ravnica never existed and to find the mechanical heart of a new city-plane. 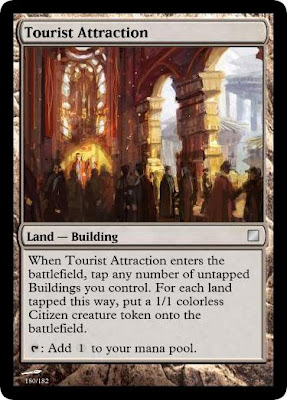 There were two things that come to mind that is the essence of a city: population and buildings. When I think of a city, I think of how there's a lot more people in it than non-city places. Additionally, all those buildings are present to accommodate the denizens of a city. Apartment buildings versus houses. Commercial buildings that house several businesses versus small stores/shops.

So, I had to accommodate both of these into a single card. Thankfully, before realizing this, I had thought of the fact that larger cities tend to have tourist attractions. In fact, the larger the city, the more presence tourism has. And the reason why I thought of "tourist attraction" was because of how there's a peculiar spotlight on two folks within the art. These folks could actually be tour guides or part of a tour's presentation.

For Buildings, I came to the conclusion that it should be a land type. I don't need to define further what Buildings would do for this card, since this is just a glimpse card I'm designing. However, as this card shows, one implementation is for them to just function like Gates, where other cards would reference Buildings. Of course, they would have more mechanical relevance than Gates as they are one of the two core attributes of a city.

And what kind of people live in a city? Citizens! If there's going to be a high number of people defining this city-plane, it should be Citizens. I was tempted to use Humans, but this city is going to be full of non-humans that live there, too. So, it wouldn't make sense to have Goblins and Elves be not considered part of the city. I also decided that every color should be able to have access to producing Citizens, so I made them colorless, flying in the fact of past cards that produced white Citizen creature tokens.

My first iteration of designing a Tourist Attraction card was to copy Khalni Garden, except the land would produce colorless mana. And, in exchange for that drawback, it would generate a 1/1 instead of a 0/1 Plant. I believed this was fine because I compared this to having a Memnite and a basic land in play on the first turn. With the Memnite 1/1 and untapped basic land, you have the drawback of two cards down and an artifact type for susceptibility to artifact destruction spells. With this card, you lose that one mana for the turn. In exchange, you have a 1/1 that's not an artifact.

But then it didn't feel like a Tourist Attraction if there was just one 1/1. And that's when I remembered how the larger the city, the more tourists are drawn to it. So, I keyed into having you tap your Buildings. The more Buildings you have (the larger "your city" is), the more "tourists" you can draw in.

When it comes to a set where there's a focus on a large number of creature tokens like the Eldrazi Spawn in Rise of the Eldrazi, it's important that, if they're 0/1, that they are functionally different, gameplay-wise, from Eldrazi Spawn. We don't want to rehash the same gameplay from before, even if it uses different rules text achieving basically the same thing.

One thing I thought of for 0/1 Citizens is something like, "T: Govern." Whatever "govern" does, I don't know. Replace it with a better word, and it would contribute to some kind of mechanical relevance in the set. However, the problem is that there needs to be reminder text for new keywords at lower rarities. And if colorless Citizens are going to permeate the set, we can't have that much text devoted to a new keyword and its reminder text. So, the Citizens have to do something else that requires few characters in the text, like "T: Gain 1 life."

In the end, I couldn't think of any inherent ability that a Citizen should have, so I decided that the fact that Citizen is an important type was going to be in this theoretical city set. There would be a mechanic in the set that would leverage Citizens. And if Citizens would have no abilities, we can't leave them as 0/1s, otherwise, they'll just be worse than Eldrazi Spawn. 1/1 it is, then! Don't worry - sets are flexible in the kind of card designs they include, which can accommodate for an environment that has a bunch of these tokens running around. Just look at Rise of the Eldrazi.
at 8:00 PM