This weekend's Magic: The Gathering design challenge by Goblin Artisans can be found here. 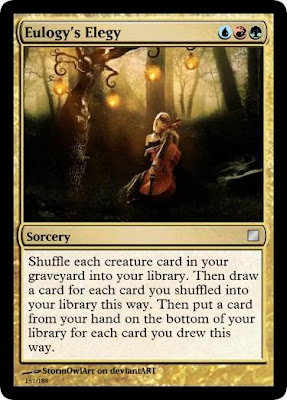 The challenge asked for a card that's not black and helps curb a strong milling strategy (but doesn't completely eradicate it). And it also asks that this be something that players would sometimes want to put into their maindeck and not just be relegated to the sideboard.

The very first thing I worried about was the flavor of the card, not the gameplay. The challenge said the set that this card comes from was open for whatever, so I took that to heart. I looked at the card's art and tried to figure out what was going on:

The person looks sad and is wearing all-black, as if someone had died. Caring about dead creatures is green. They're also playing music. Is this in honor of the dead creature(s)? In that case, this could be a eulogy, but the music can be an elegy! I love alliteration, so I knew I had the name of my card. Playing music can be red, because of the emotion and passion put into it. But playing carefully-structured and methodically-arranged notes that forms into a musical piece can also be blue. With all of this, I took this as a cue to pretend this card is from an imaginary block/plane with "wedge" color combinations.

If the card's effect is going to care about dead creatures, it would care about creature cards in the graveyard. The card also has to combat milling, so I had the effect of the spell put those creature cards back into the deck. This is quite green (blue can shuffle cards back in the library, too - just not so much focused on creatures), so that color was taken care of, gameplay-wise.

Next, I had to figure out what red and blue was going to do. Both red and blue have the "looting" ability, so I used that. But the problem with looting is that you're "milling" yourself. So I figured that both blue and red together would have "slightly-'improved' looting." Instead of discarding the cards being looted away, the cards go on the bottom to keep up your increased number of cards in your library. As an added bonus, this avoid any awkward flavor clash by having the player discard creature cards. The spell's flavor wouldn't want to cause creatures to go into your graveyard after having just revered dead creatures!

Also, the combination of shuffling creature cards into the library and then drawing cards means there's chance involved in drawing them. This further adds to the redness of the spell.

Other card effects considered but discarded: gaining mana a la Seething Song, except mana of any color due to green being able to grant color of any mana; and gaining control of creatures with a fog effect.
at 9:59 AM