During the month of October is #Inktober! Each day has a single-word prompt, but instead of inking something, I'll be designing a Magic: The Gathering mechanic to fit the word. This is called #Meltober, named after "Mel", the more mechanically-inclined counterpart to "Vorthos" of the aesthetic profile spectrum. 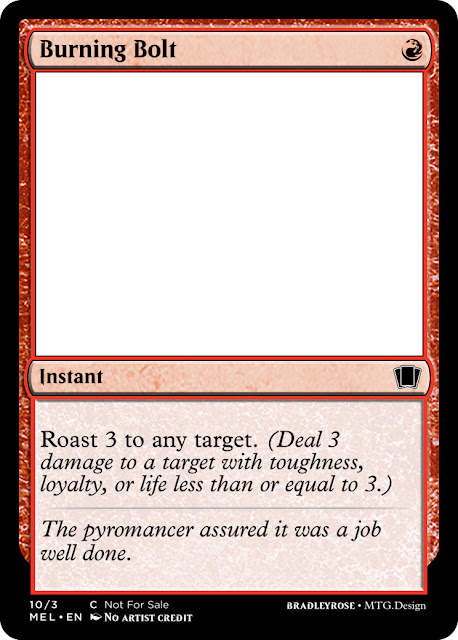 What if Lightning Bolt could only target players if it was a killing blow? The same goes for planeswalkers and creatures. The idea of "roasting" something is that you gave enough firepower to completely destroy them.

Note that roasting a target won't work if the target is partially damaged, and you'd otherwise wouldn't be able to kill it. If a creature with 4 toughness was dealt 2 damage earlier, they still wouldn't be an eligible target by Burning Bolt because they have greater toughness than the three roast damage - while a Lightning Bolt would, of course, be able to finish off a partially-damaged 4-toughness creature.

While the reminder text focuses on brevity, hopefully it's clear that roast can only count toughness on creatures with toughness, loyalty on planeswalkers with loyalty, and life on players with life.

I'm not sure if the rules normally counts players with no loyalty counters or toughness to be "having no toughness means having less than three toughness." Whatever the case may be, you'd write roast comprehensive rules to accommodate accordingly.
at 8:09 PM