During the month of October is #Inktober! Each day has a single-word prompt, but instead of inking something, I'll be designing a Magic: The Gathering mechanic to fit the word. This is called #Meltober, named after "Mel", the more mechanically-inclined counterpart to "Vorthos" of the aesthetic profile spectrum. 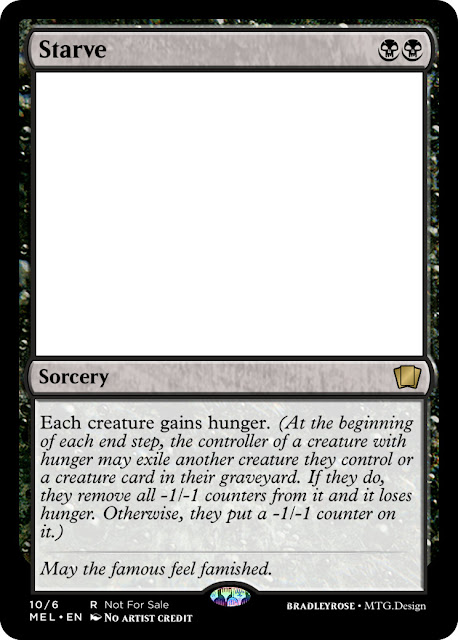 Yes, hunger does function differently in multiplayer games versus 1-on-1 games, due to more end steps. That's because the feeling of "waiting" until your next turn is mirrored with the experience of a hungry creature.

The idea here is that a hungry creature needs sustenance and will wither away unless they eat ...in this case, eat someone else, whether alive or dead. Gross, I know. But, hey, I figure this would be a mechanic in black, red, and green. Jund. Another Jund mechanic? Devour. :)

The mechanic is wordy, and it's really odd to write hunger out to explain how it works when you give hunger to every creature instead of, say, writing it out for a 2/2 bear with hunger.
at 1:31 PM