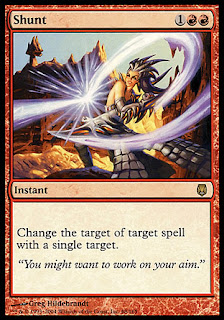 God, I love Shunt. Changing the targets of spells and abilities being a blue and red thing is awesome. I still harbor this desire for more Gnomes to exist in Magic: The Gathering and within the blue and red colors so that they can do tricky things like Switcheroo and effects like Shunt's. Though, I do believe it's important that an effect like Shunt's, being widely applicable to your opponent's spells, that this type of effect should stay at rare. Uncommon is a low enough rarity that makes opponents scared of casting their spells as normal, which is not a good feeling and/or behavior to induce in players. 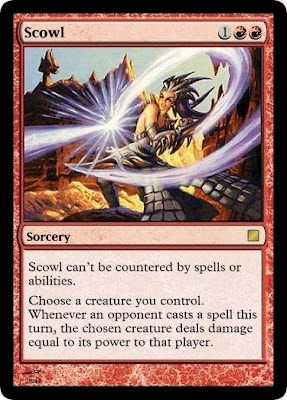 From the art, it looks like the Vulshok person is in a defensive stance. Because of this, I opted for something that reflected the defensive nature of the situation. That blue magical stuff isn't an offensive thing.

I decided that the Vulshok here is a creature that you've designated for this defensive spell you're doing. However, white is defensive. Red's defense is offense. It threatens.

I thought of the spell Silence. While white would make sure that opponents just can't do it at all to prevent bad things from happening, red would instead give a dirty, menacing look at the opponent saying, "Hey, if you do this, I'm going to hurt you."

Also, having it be sorcery so that it focuses on just your turn is an extension of not being proactive in being defensive like white is with Silence. It's, "Hey, let me do my thing (which is smash your face in), and if you try anything, you're going to hear from me."

It LOOKS like the creature could be scowling, right? The word fits between Savage Beating and Slobad, Goblin Tinkerer. It also depicts the mid-result of the opponent actually having the audacity to cast a spell even after your scowl. Looks like a more "Ah, you're going to get hurt now! I freakin' told you!"
at 12:03 AM