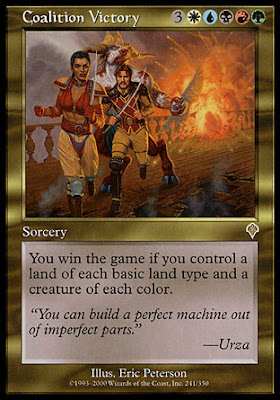 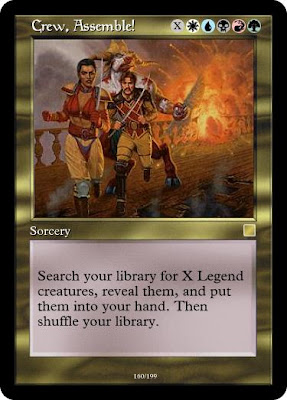 Tsabo Tavoc kills legendary creatures. Here's a counterpart to that. If Tsabo is Loki, then the Weatherlight Crew are the Avengers. And here they are, as a collective, responding to something. I just HAD to do this name as a riff on the "Avengers, Assemble!" thing.

NOTE: I know only just a little about the Weatherlight story. So, I may be wrong to call Tsabo Loki in this analogy.

I had to keep this card at five colors. Here's why: every single color combination is already balanced equally in number of cards in the set Invasion. If I chose anything besides 0 or 5 colors, there'd be an imbalance. So, I was stuck doing a colorless card or a five-color card. And, of course, a colorless card would mean an artifact. Five colors it is.

And there's ACTION going on in the art. And those legendary folks. I couldn't do a creature or something like an enchantment, unless it was a magical effect that kept causing explosions or something and people running around over and over. So, instant or sorcery it should be.

I figure that if you're paying FIVE colors for this spell, you deserve being able to cast this and get a bunch of legendary creatures. After all, you do still have to cast them, too.
at 7:42 PM