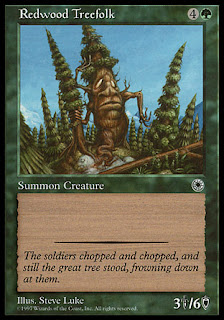 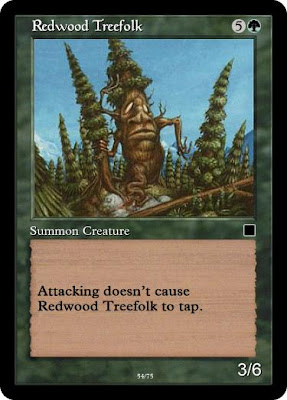 Seems like such a hack job, no? Actually, no! This is a strategic design. Here's why:

1) There are no common creatures in the Portal set with vigilance. I know that green hadn't yet really established itself as a color with vigilance, but since I already use the future to my disadvantage when redesigning cards, I could also use the other side of that coin and take advantage of how in-color this is.

2) There are no green creatures at a mana cost of six while there are plenty at five. And increasing the mana cost by one just for the ability means I don't have to increase any of the stats the Treefolk has. I'd rather not have a power 4 or a toughness 7 common creature.

I wanted to give this Treefolk reach, but Giant Spider is already at green common, so I didn't want to overload that area. I mean, look, it even looks like this tree is reaching with its third arm! "Reaching Treefolk." So I settled on vigilance.
at 9:47 AM