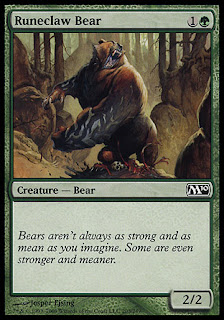 Whoa. The staple 2/2 common green creature of Core Sets. Actually, green has a history of having 2/2s for 1G that do a little something else. This sets it ahead of white and black who also get 2/2s for two mana. Check out this list of 2/2s for two with a little something-something. In fact, in Magic 2013, Runeclaw Bear was ousted by the strictly-better Timberpack Wolf. So, let's do the same. 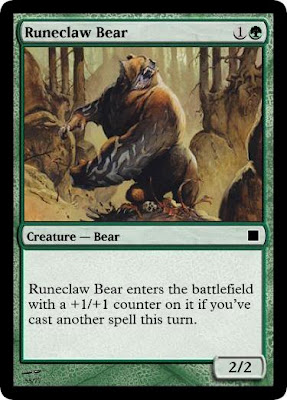 Because there is a skull underneath the bear's foot, I wanted to have this redesign fight another creature upon it entering the battlefield. But fight hadn't yet been keyworded when Magic 2010 had been released, which would mean a very wordy textbox. I couldn't do that. Also, it may have been a bit too powerful to appear frequently in Limited and perhaps would be an uncommon. Scratch this.

Next, I wanted this bear to be able to do this:

Because bears can climb trees. For real. But in Magic 2010, there were already two common Spider cards in green that have reach.

I wanted to have this bear be able to give you a honeycomb of honey upon entering the battlefield, like a Honeycomb Bear or something, which would give you 1 or 2 life. But the art shows a vicious bear totally not doing anything honey related. Better save that design for art depicting a more gentler bear.

I then decided to key in on the "runeclaws" it has, which makes it a magical bear. Magic! Spells! And why not? It replace Grizzly Bears - it should at least have the decency to actually be magically better in some way.
at 1:53 PM