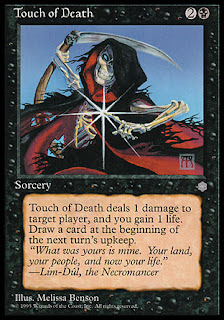 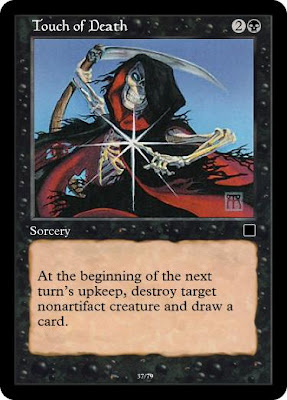 I originally was going to do a version of Go for the Throat but with the clause that is usually found in Ice Age of "Draw a card at the beginning of the next turn's upkeep." However, in an environment where there isn't a prevalence of artifact creatures, it would have been too powerful. So, I decided to go for a sorcery speed version. Not as good as Dark Banishing.

Also, it's a flavorful representation - Death is coming for the creature, and the creature is doomed for sure. So, I put the death at the beginning of the next turn's upkeep, too. The card that is drawn can be represented as the "soul" that Death collected from this creature dying.