A staple of planeswalker Nathan Holt! Is it possible to be redesigned? 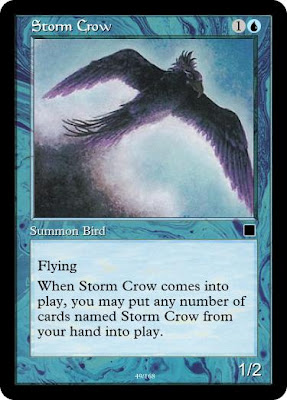 You don't mess with Storm Crow. Yet, Floodbringer, Tempest Owl, Screeching Silcaw, and Metropolis Sprite don't seem to get this message. So, since Storm Crow's stats are already so powerful, I had to juice it up in a slightly different and mild way.

I wanted to find an ability that rewards you for your dedication to Storm Crow. I also wanted you to feel like you were storming with crows. This design encourages it being correct to keep a two-or-more-Storm-Crow hand. It trades card resources from your hand for early pressure! Storm the skies!

This ability appearing on a two-drop makes it that much safer to put onto a creature. If it were on a 7/7, it wouldn't be as safe, since then players can manipulate their libraries/hands to ensure all four copies are in hand then just drop the bomb. In this case, the best play would be to cast a Brainstorm spell of some kind to help you set up your storming of crows for maximum potential on turn two.
at 5:31 AM