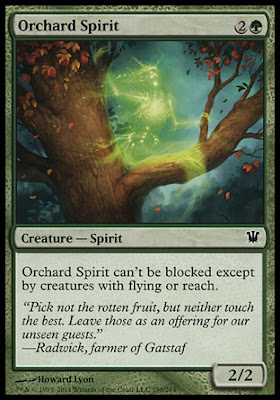 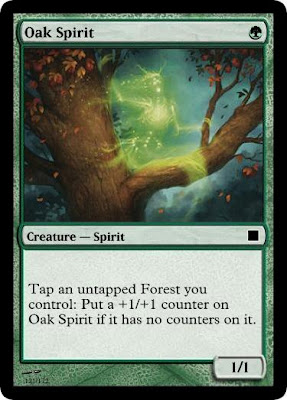 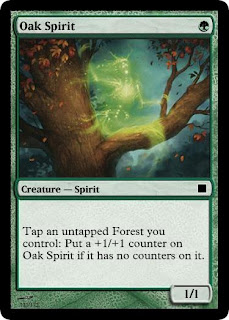 At first, I wanted to give this ghost forestwalk for having what seems to be a kinship with trees. But because Somberwald Dryad already exists in Dark Ascension, I thought it best to go a different route.

You could say that this is just an unnecessarily complicated 2/2. But, that would be incorrect. It's a "2/2 with haste" compared to a Runeclaw Bear as long as you cast it on turn 1. And it gives you  flexibility with when you pay in a tap of a Forest for its 2/2 body.

I could have written the ability's cost with a green mana symbol instead. But that wouldn't have told as much of a story as requiring a tap of an untapped Forest. What's going on here, flavorwise, is that this spirit is drawing upon the power of a tree to enhance itself. It needs a Forest and not just any land - like a dual land. And it only gets one +1/+1 counter because it's only getting power from its tree brother (the one it is sitting on).

This is why I renamed it to be Oak Spirit instead of Orchard Spirit - because the original name implies many trees - which clashes with the flavor I'm going for in my redesign.
at 3:53 PM