During the month of October is #Inktober! Each day has a single-word prompt, but instead of inking something, I design a Magic: The Gathering mechanic to fit the word. This is called #Moxtober. 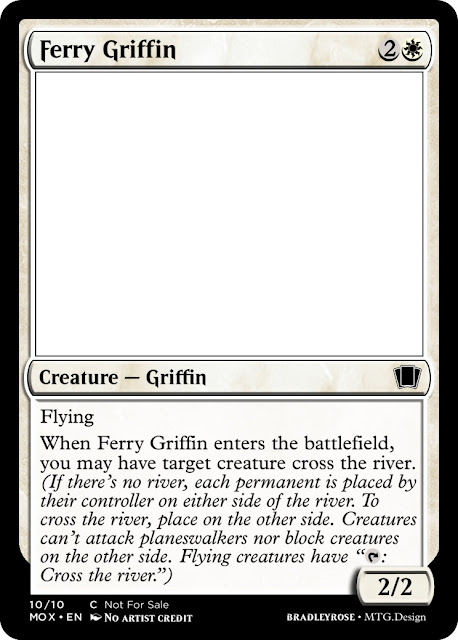 I tried to get the wording correct on this - it was crucial to not mention "left" or "right" of the river. Instead "either side" or "other side" is used. This is because, when your creature is on the left of the river from your perspective, the creature your opponent controls that is on the same side looks like it's to the left for you but is actually on the right side for them. To avoid confusion, just mention "same side", "other side", etc.

It doesn't make sense for the most prominent creature keyword ability to be restricted by a river - so it still had to make sense without increase wordiness. Solution was granting the "Cross the river" ability but also gave a way for sides to actually matter for flying creatures. They're not omnipresent on a river battlefield and requires some beating of the wings to get to the other side.

For visuals and logistics, players would be able to obtain somehow a way to have an unfoldable paper river that is placed in the middle of their side of the battlefield (or perhaps flexible enough to either place on just your side or on both sides). It'd also have the rules printed on it for helpfulness (and point out that players are always on both sides - or neither sides, whichever language).

For multiplayer, this still works fine. Just compare your opponent and you as if you were facing each other in a one-on-one game. Sure, this means the river looks like some kind of star or three-point or 'X', etc. - but that's all right. Real life has crazy, sprawling rivers.

I'm excited for this meaning Vehicle boat cards that can help to cross rivers. :)
at 2:25 PM